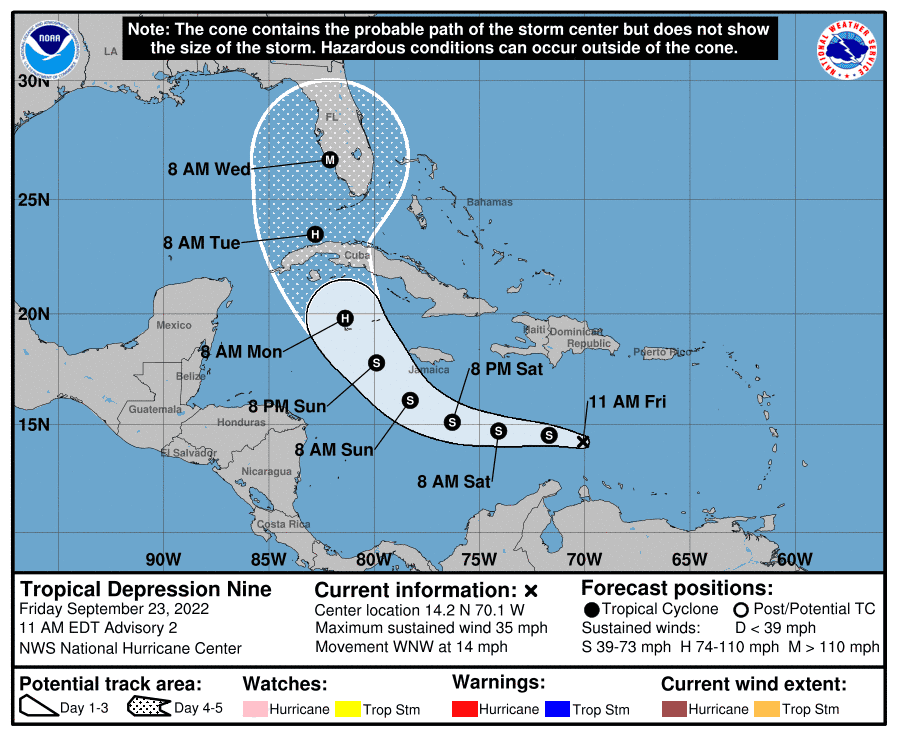 Invest 98L has formed in the Caribbean into Tropical Depression 9 and is expected to become Hurricane Hermine by early next week. The National Hurricane Center track Friday morning showed the center of the storm headed to Sarasota and Manatee counties, but forecasters cautioned there is much uncertainty predicting the track of the storm this far out from potential landfall in Florida.

“In fact, this forecast calls for the system to approach the Florida peninsula as a major hurricane by day 5,” said Brad Reinhart, hurricane specialist at the National Hurricane Center, “which is supported by the latest IVCN and HCCA aids.”

As of 11 a.m. EDT, Tropical Depression Nine had winds of 35 mph. It was headed west-northwest at mph. The storm was 1,211 miles southeast of Sarasota.

Hurricane Guide 2022: What do you need to know?

Tropical Depression Nine is expected to gradually strengthen into a tropical storm by tonight, with more significant intensification Sunday and Monday. The National Hurricane Center’s initial forecast has it becoming a Category 2 hurricane by the time it nears the coast of Cuba early next week. But if it crosses over Cuba it’s uncertain how much that will weaken the storm or when in its path it will begin to gain strength when it hits the bath-warm waters of the Gulf of Mexico.

There is still a healthy amount of uncertainty in the track forecast at the day 4-5 timeframe. After the system forms into a tropical storm, a more accurate forecast will be possible.

If Tropical Depression Nine becomes a named storm, it would be called Hermine. But it might have to hurry, Tropical Depression Ten just formed over the far eastern Atlantic. It’s expected to be short-lived, according to the National Hurricane Center.

Though Tropical Depression 9 is not expected to become Hurricane Hermine until late Sunday or early Monday, most of the predictive models show it impacting Florida near Sarasota and Manatee counties. However, forecasters caution that it is still too much uncertainty to have confidence in the storm track predictions.

“The track is still kind of uncertain,” said Christianne Pearce, a meteorologist at NWS Tampa. “The center (of the storm) wobbles in the early stages. We’re also not sure that it’ll certainly make that turn towards Florida.”

When will Hurricane Hermine hit Sarasota-Manatee?

If National Hurricane Center and other predictions hold true, Tropical Depression 9 will steadily increase in intensity, becoming Hurricane Hermine by Monday morning, and will impact Florida in the Sarasota-Manatee area at some point on Wednesday.

Stay up to date on the storm: Download the updated Herald-Tribune app

HURRICANE GUIDE: Tips to stay connected before, during, after the storm

Bill Logan, the information outreach manager for the county, said Manatee County is partially activating their Emergency Operations Center this afternoon, but without permanent staff for now, referring to it as a move of extraordinary caution.

Sarasota County officials put out a statement on their social media Friday morning, stating they are monitoring the storm’s progression.

“We’re not activated (for an emergency) just yet,” Brianne Grant, a media relations officer for the county said. “We’re monitoring all activity and recommend residents to review their plans, prepare go-kits and visit our website for storm checklists and tips.”

On the forecast track, the center of the cyclone is forecast to move across the central Caribbean Sea through Saturday, pass south of Jamaica on Saturday night and Sunday, and approach the Cayman Islands on Sunday night and early Monday.

Maximum sustained winds are near 35 mph with higher gusts. Some slow strengthening is forecast during the next day or so, and the depression is expected to become a tropical storm by tonight. More significant intensification is forecast on Sunday and Monday.

One thought on “11 a.m. update: Sarasota-Manatee still in path of storm expected to become Hurricane Hermine”