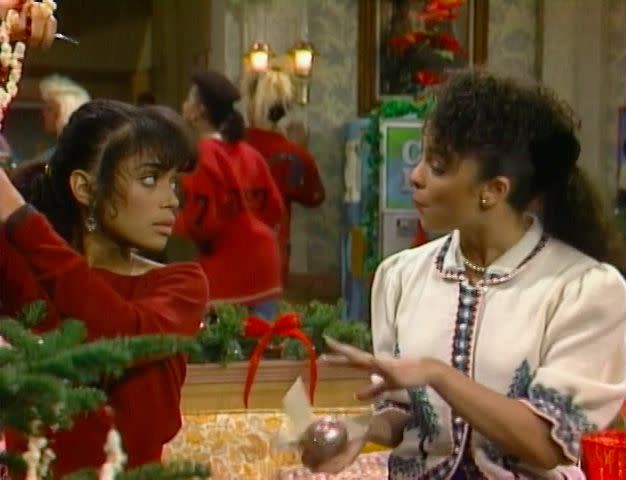 Jasmine Guy revealed that said that she was about to quit A Different World because of how Lisa Bonet was treated and also said Bonet had to hire security.

Guy and Kadeem Hardison were talking on The Breakfast Club about their time on the show to promote TV One’s upcoming 35th anniversary special of A Different World. Guy said that she had put in her two weeks’ notice because of the mistreatment she saw from execs toward Bonet, who played Denise Huxtable.

As she said, she “didn’t like” what she saw and heard.

She said she told execs, “‘You disrespect her in front of the audience, in front of me, you’re disrespecting me, too!’” She added that those producing the show would tell Bonet, “‘Just do it, just say it!’ Pointing all up in her face.”

“You know, I’m like, ‘That’s a sweet girl because you’re not getting all up in my face like that,” she continued. “And we’ve dealt with bitches…as far as choreographers and directors or what tnot…I didn’t interfere onset, but I was like, ‘Oh no, you not treating her like that.’ She had to hire security!”

The reason why Bonet left the show was also discussed, with Hardison saying that he heard it was because Bill Cosby didn’t want a pregnant Black girl on television.

“I thought it would have been a great tool and something to…inspire…so why not? That’s a real thing,” he said, with The Breakfast Club co-host Angela Yee saying that it could have helped girls who were also pregnant know they can continue getting their education.

Watch the clip below.

The 35th anniversary A Different World special airs on TV One Sept. 24.

Watch the full interview below:

One thought on “‘A Different World’ Star Jasmine Guy Says Lisa Bonet Was Mistreated By Producers And She Had To Hire Security: I ‘Didn’t Like’ What I Saw And Heard”