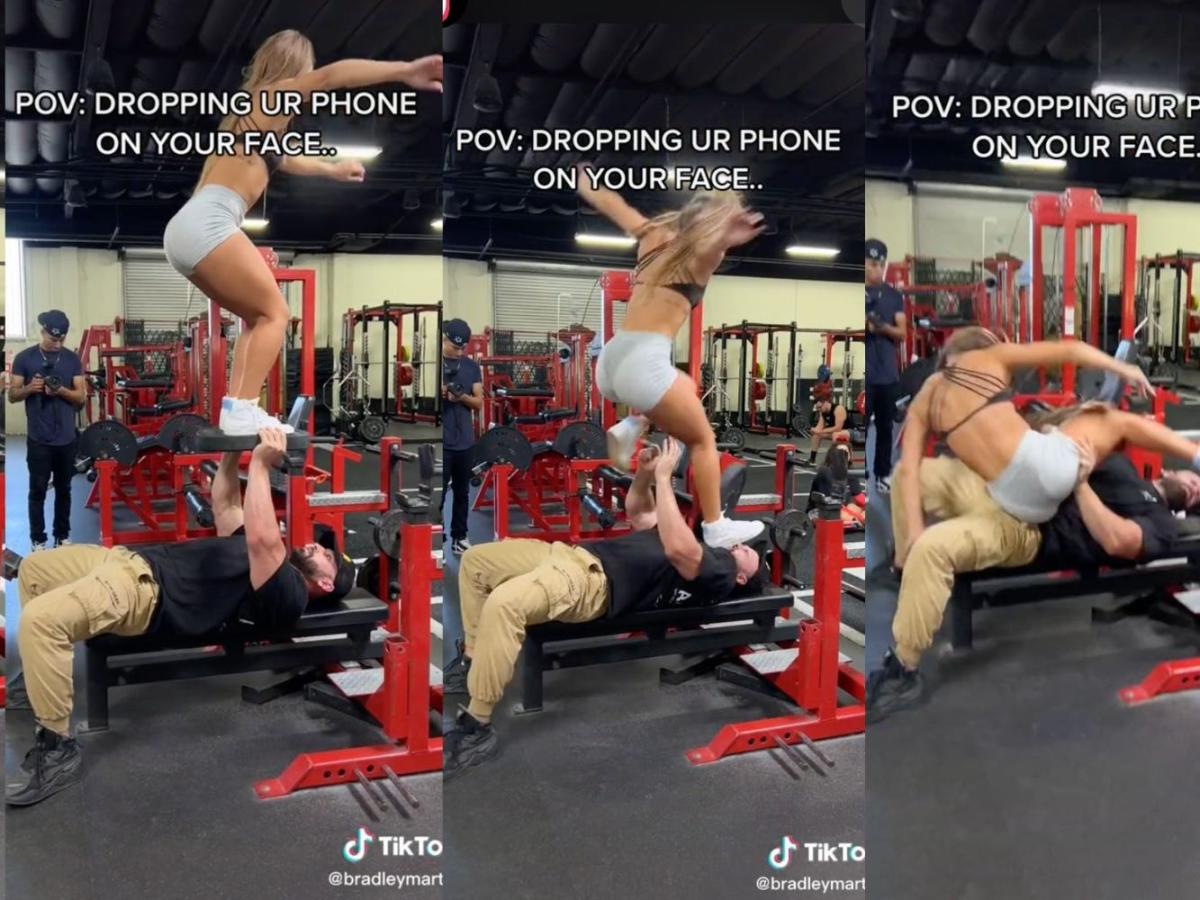 Fitness influencer Bradley Martyn went mega-viral with a since-deleted TikTok video that showed him attempting a weightlifting stunt that he said led to him ending up with 10 stitches in his mouth.

The video, seen by Insider, received 17.2 million views on TikTok before it became unavailable to view, though a separate YouTube upload of the footage remains public. It shows Martyn lying on a piece of gym equipment while holding onto a high-density rubber weight known as a bumper plate. A woman then climbs on top of the weight and Martyn attempts to lift her, but she falls on top of him, kicking him in the face in the process.

Martyn posted the video to his TikTok account on September 22 with the caption: “POV: DROPPING UR PHONE ON YOUR FACE.”

Many of Martyn’s videos involve him attempting stunts and extreme workouts, including a tug-of-war battle with a tiger and lifting and sparring with an animal carcass.

In a follow-up TikTok video, Martyn showed himself attempting the same stunt, this time successfully lifting a woman several times without her losing her balance. In the video’s caption, Martyn wrote, “This is what I was expecting. Two things I did wrong here. Have her spin around and use a bumper plate.”

Martyn described the accident in a follow-up video on his YouTube channel.

He said, “I tried to lift a girl. Now, I’ve done this before where a girl sat down on a plate and I pressed her. But, someone was like, ‘Why don’t you have her stand up?’ and I was like yeah, that’s cool, that’s easy.”

Martyn said he used a rubber bumper plate to lift her instead of a steel plate, which was a “mistake” because bumper plates are harder to balance on.

Martyn said he waited four hours at a local emergency room to get “10 stitches” inside his mouth after the stunt.

Martyn is far from the only TikToker to injure himself in pursuit of a viral clip. Videos tagged on TikTok as “injury while lifting weights” have received over 600 million views. Doctors have previously warned against a number of online fitness trends which they say are ineffective or dangerous, such as a viral abdominal weight loss dance, putting garlic cloves in nostrils as a decongestant, and exposing genitals to the sun to “increase vibrations.”

TikTok sometimes adds content warnings to videos to highlight that the behavior depicted carries risk, or deletes them from the platform entirely. It is unclear why Martyn’s original video is no longer available to view, and neither he nor TikTok responded to Insider’s request for comment.

As well as a TikTok and YouTube presence, Martyn has four million followers on Instagram, where he posts fitness-related content. He also hosts a podcast titled “Bradly Martyn’s Raw Talk,” which features Martyn talking about a variety of topics.

For more stories like this, check out coverage from Insider’s Digital Culture team here.