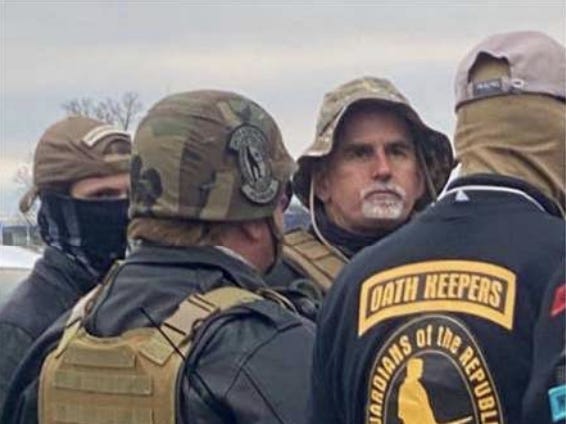 Wearing a tactical helmet and vest, Oath Keepers member Graydon Young felt like the United States was on the cusp of revolution on January 6, 2021, when he heard that the pro-Trump mob had breached the Capitol.

“I felt it as like a Bastille-type moment in history,” Young recalled Monday, as he testified at trial against Oath Keepers founder Elmer Stewart Rhodes and other members of the far-right group charged with seditious conspiracy.

“Unfortunately for me, at the time it was exhilarating,” he added.

But, joined by his sister inside the Capitol, Young soon grew concerned about his own legal exposure and the Oath Keepers’ intentions as members discussed the protective gear worn by police officers and whether it would prove effective against firearms. Young drove with his sister to her home in North Carolina and, in a backyard burn pit, scorched protective gear and an Oath Keepers t-shirt he had worn that day, he said Monday.

“My sister and I were solidly in freakout mode and scared,” he testified. Another thought occurred to him, he said: “I’m going to have to tell my mom.”

His sister, Laura Steele, has pleaded not guilty to charges stemming from January 6 and is awaiting trial.

Young pleaded guilty last year to conspiracy and obstruction of an official proceeding in connection with his role in the January 6 attack on the Capitol. Under the terms of his plea deal, Young took the stand to testify as a key witness in the first January 6 trial involving seditious conspiracy charges.

In emotional testimony, Young repeatedly said he was embarrassed by his involvement in the Oath Keepers’ planning for January 6 and in the Capitol attack itself. At one point, Young appeared to choke back tears as he explained his decision to plead guilty, saying it was necessary for him to confess “completely and wholly.”

“I won’t do anything like that ever again,” he said. “It’s really embarrassing.”

Young entered the Capitol in a military-style “stack” formation, with his hand on the shoulder of Kenneth Harrelson, who is among the Oath Keepers members facing trial on seditious conspiracy charges.

With Young on the witness stand, federal prosecutors introduced messages and other evidence showing the Oath Keepers’ planning ahead of January 6. In one message, a member of a group chat appeared poised for the Oath Keepers to play a prominent role in disrupting the certification of President Joe Biden’s electoral victory.

“We are going to be in the lead of 1776.2,” wrote a sender identified as “Aaron” in an apparent reference to the year in which American colonies declared independence from Britain.

Young on Monday followed in the footsteps of another former Oath Keepers member, Jason Dolan, who had testified earlier in October against Rhodes and four others charged with seditious conspiracy. Like Dolan, Young recalled buying into the debunked claims — spread by former President Donald Trump and his allies — that the 2020 election had been stolen. Within weeks of joining the Oath Keepers, in late 2020, he joined a security detail for longtime Trump ally Roger Stone.

As January 6 approached, Young questioned the Oath Keepers’ ability to disrupt the certification of Biden’s win and shared his misgivings with fellow members of the group.

“We need MUCH larger numbers PDQ,” he wrote on Christmas in 2020. “The government’s huge.”

But on Monday, Young said he was “regalvanized” by Rhodes, who had led Oath Keepers members to believe he had a direct line to leaders in Washington, DC.

“I’m going to DC but it feels like a fool’s errand based on current events,” Young wrote in a text message.

Inside the Capitol, Young testified Monday, “It was pandemonium.”

But nearly two years later, Young said, “I’m really sorry for what I did.”

One thought on “A former Oath Keeper testified he was in ‘freakout mode and scared’ after January 6. ‘I’m going to have to tell my mom.’”