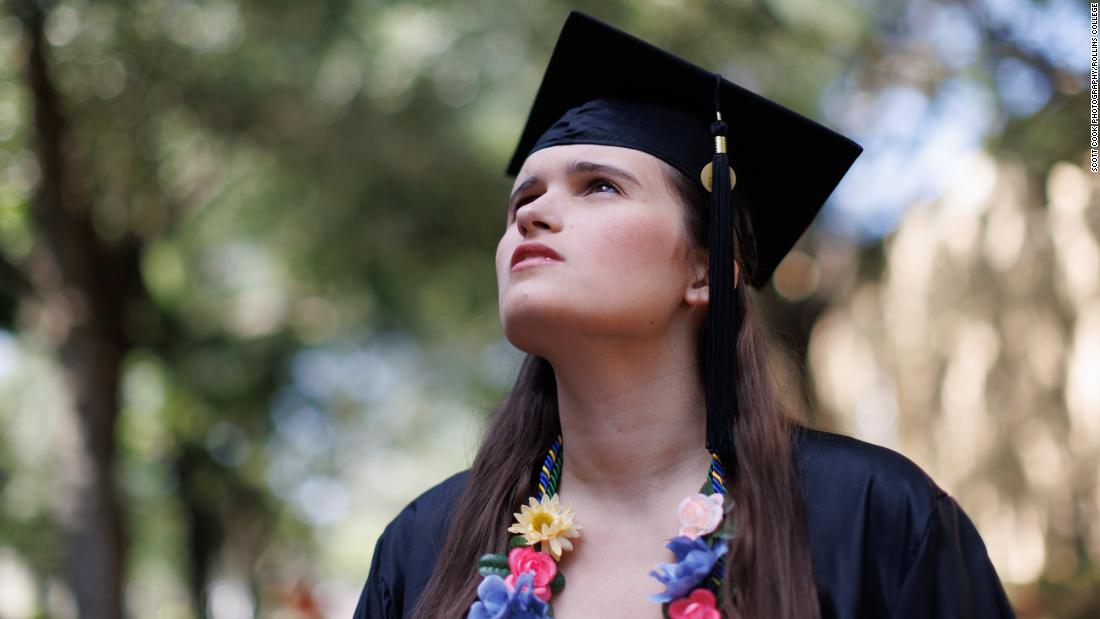 Clad in a cap and gown decorated with flowers, Bonker explained, through a text-to-speech program, how she typed her remarks using a single finger with the help of a communication aide. People with nonspeaking autism have trouble developing speech, and in Bonker’s case, neuromotor issues inhibit her communication and her ability to do some other basic tasks.

Learning to type changed everything.

“That one critical intervention unlocked my mind from its silent cage,” she said during her address.

Her goal is to help them find their voice, as she has.

“I have a dream. Communication for all,” she said. “My life will be dedicated to relieving them from suffering in silence.”

In her address, Bonker said she has often been minimized or cast aside because of her differences, and her high school principal once called her a slur and said she would never be a valedictorian.

However, Bonker encouraged her fellow students to hold fast to their freedom to choose their own outlook and their own way in life, which she called a “fundamental human right.”

In that freedom to choose, Bonker hopes her fellow graduates will choose to live a life like Mister Rogers did, and like she intends to.

“We are all called to serve as an everyday act of humility; as a habit of mind; to see the worth in every person we serve,” she said.

Bonker was one of five graduating students to earn a 4.0 GPA, and Rollins College said her fellow valedictorians unanimously chose her to address their fellow graduates.

“Elizabeth’s message has given hope to millions of people who are nonspeaking autistic, and their families,” Rollins College President Grant Cornwell said in a statement provided to CNN. “We are thrilled for Elizabeth and hope the attention to her story supports her advocacy work going forward.”

During her time at Rollins, Bonker also founded Communication 4 ALL, a nonprofit that supports her dream of ending stigma and silence for other nonspeaking people with autism.