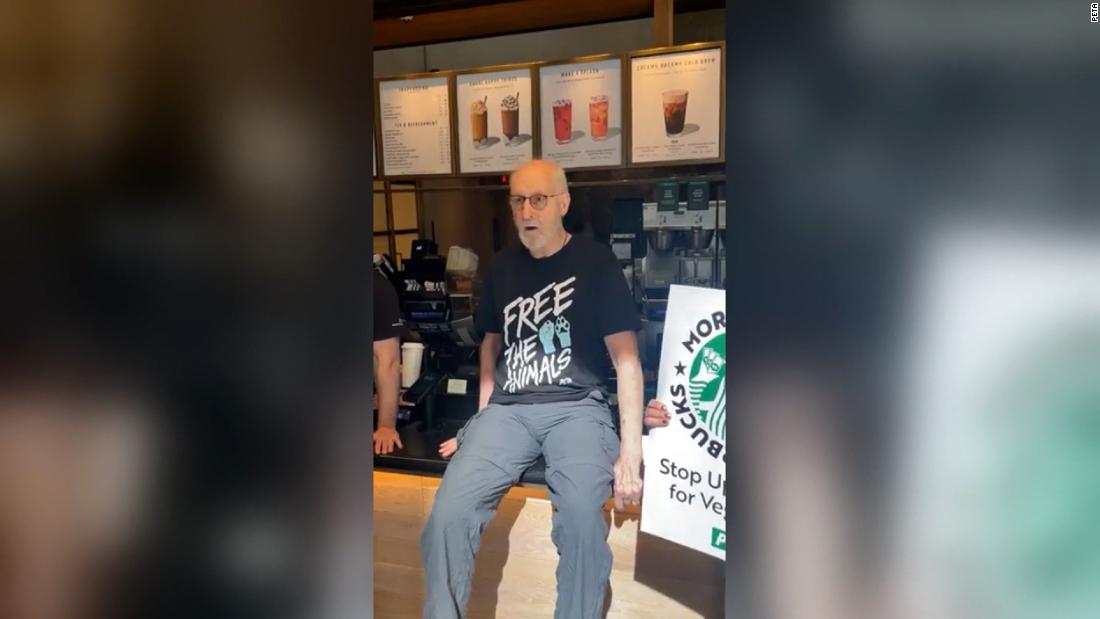 The incident, which happened Tuesday, was a protest coordinated with People for the Ethical Treatment of Animals (PETA). Cromwell is a longtime supporter of the group and serves as an “Honorary Director.” He’s seen on video posted by the organization asking Starbucks to “stop charging more” for vegan milk.

Starbucks charges roughly 70 cents extra for a dairy alternative, which includes soy, coconut, almond and oat milks, depending on the US city. The chain recently dropped the surcharge at its United Kingdom stores.

“My friends at PETA and I are calling on Starbucks to stop punishing kind and environmentally conscious customers for choosing plant milks,” Cromwell said in a press release from PETA. “We all have a stake in the life-and-death matter of the climate catastrophe, and Starbucks should do its part by ending its vegan upcharge.”

The incident appeared to last about a half hour before police arrived to clear the midtown Manhatte cafe. Cromwell appeared to scrape the glue off his hand with a knife.

PETA has long been vocal about this issue. They recently had Sir Paul McCartney write an open letter to the company to former CEO Kevin Johnson asking that its US locations to eliminate the extra fee as they’ve done in the UK.

Cromwell was also nominated for an Academy Award for his role as the farmer in the 1995 film “Babe.” He currently plays Ewan Roy in “Succession,” which airs on HBO. Like CNN, HBO is owned by Warner Bros. Discovery.