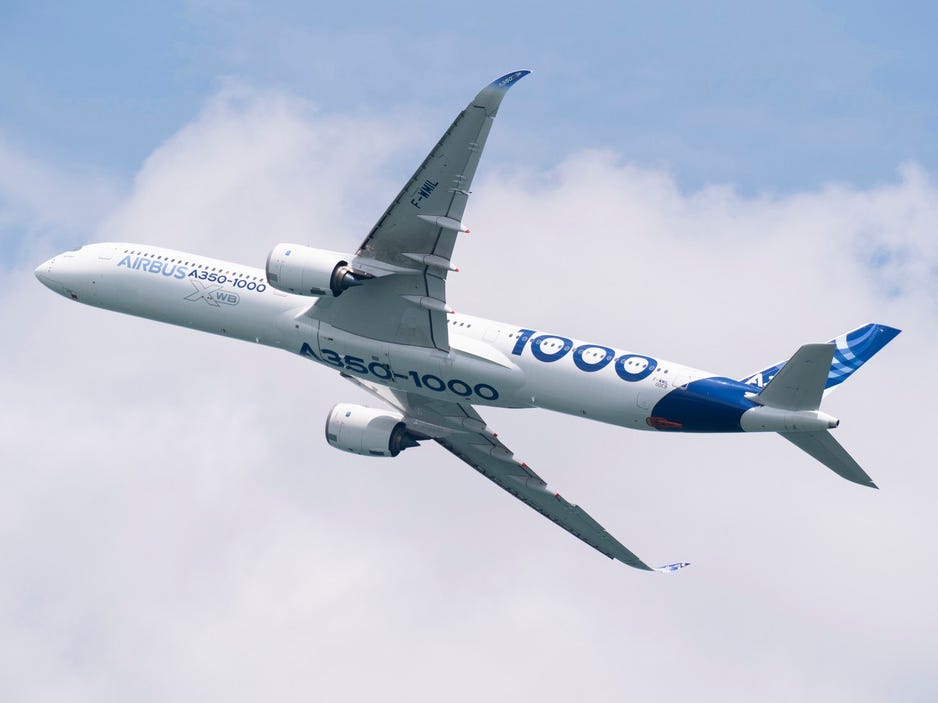 Airbus just unveiled an all-new cabin configuration for its A350 widebody jet with the goal to offer airlines more revenue opportunities and better efficiency.

On Wednesday, the European planemaker announced a 10-abreast seating layout for its A350 variants, including the -900 and -1000, made possible by adding four inches of space to the cabin width by carving out the sidewalls.

The move is part of the manufacturer’s New Production Standard launched at the end of September, which also improves performance and reduces weight.

With the added space, 10 seats can fit across instead of the standard nine, increasing capacity by a total of 27 seats on the -900 and 34 seats on the -1000 in a three-class layout, Airbus told Insider.

This brings the total A350-1000 passenger capacity to 410 in a typical three-class layout. The Boeing 777X, by comparison, can accommodate up to 406 people, per Reuters.

Boeing maintained its 777X is still more comfortable: “Today’s 777 offers a wider cabin than the competition, and the new 777X cabin is even more spacious, providing the widest and most comfortable cabin in its class,” a spokesperson told Insider.

Airbus’ A350 can actually already accommodate 10-abreast rows in a high-density configuration, which is used by only a few airlines, like no-frills carrier French bee, but it’s a tight squeeze.

According to French bee, its A350-900 economy section offers 16 inches of width. Meanwhile, its sister company Air Caraibes offers 16.8 inches, per SeatGuru.

While customers are booking the narrow seats, they are still below the industry standard width of 17 inches, and analysts and airlines have criticized the planemaker’s narrow option.

This is especially after, in 2013, Airbus actually said 18 inches should be the standard after Boeing introduced 17-inch-wide seats on its 787.

For context, the A350’s typical 3-3-3 layout has historically offered 18-inch-wide economy seats and competes with the 787.

However, backtracking on their 2013 comments, Airbus’ new layout will allow all ten seats to have the full 17-inch width, saying it “transforms the passenger comfort of [the] previous 3-4-3 arrangement.”

This is still less than what the current Boeing 777 can offer though, which already regularly accommodates 10-abreast seats and is another major competitor to the A350

Source: Airbus, I went inside an Airbus A350 owned by Italy’s newest national airline flying from Europe to the US and I now can’t wait to fly on it

Source: Airbus, We flew on the longest flight in the world in both business class and premium economy to see how they compare — here’s what we discovered

The company told the Runway Girl Network in September that the planemaker is working to also utilize the extra four inches to improve business class comfort.

Source: Runway Girl Network, SAS Scandinavian Airlines is deploying its brand-new jet to the US to take flyers to a reopening Europe and beyond — see inside

Moreover, repositioning the cockpit wall and bulkhead has allowed Airbus to add more space to its forward galley, and create an extra large galley in the back of the plane.

While these changes seem like a big move from Airbus, Richard Aboulafia, the managing director of consulting company AeroDynamic Advisory, told Insider it’s too little, too late.

“Density is always welcome, especially at a time of high fuel prices,” he said. “But, this was probably better done about six or seven years ago.”

He said this move is not a game-changer, and the reason is twofold: First, the widebody market is shrinking, especially with the rise in popularity of long-haul narrowbodies, like the Airbus A321neo…

I flew JetBlue’s new London to New York route in Mint business class. It’s a premium leisure traveler’s dream but some kinks need to be ironed out.

…and the Boeing 737 MAX families. These aircraft are starting to see more long-haul travel, particularly across the Atlantic.

Source: Airbus, Delta became the largest customer of the Airbus A220 jet in the US, surpassing JetBlue — see inside the carrier’s swanky single-aisle plane

“The second closely related problem is the widebody market that remains really doesn’t care about the back of the cabin,” Aboulafia said.

He explained to Insider that Airbus’ new economy configuration could benefit profit margins, noting United Airlines may see it useful for its -900s on order, but said the money “is always made in the front.”

According to Investopedia, only about 12% of airline customers are business travelers, but pre-pandemic, those passengers accounted for 75% of revenue on some flights.

While Airbus’ new cabin may not be as advantageous for mainline airlines, low-cost carriers could be a big winner: “It is roughly 11% more efficient in economy-class pricing,” cabin expert John Walton told Reuters.

This means budget airlines could offer even lower fares, but Aboulafia says the “moment has passed” for low-cost carriers regularly buying dual-aisle planes.

Over the years, budget airlines that typically pack the economy cabin to its limits have lessened their reliability on widebody jets in favor of more cost-efficient single-aisle ones, like Iceland’s PLAY.

Nevertheless, Walton told Reuters that he believes airlines that opt for the A350 could welcome the 10-abreast layout, which would match the typical 777 configuration.

“Anyone who already has the A350 will probably go nine abreast – for now – to maintain commonality,” he said. “The question is what happens later when planes start leaving the fleet.”