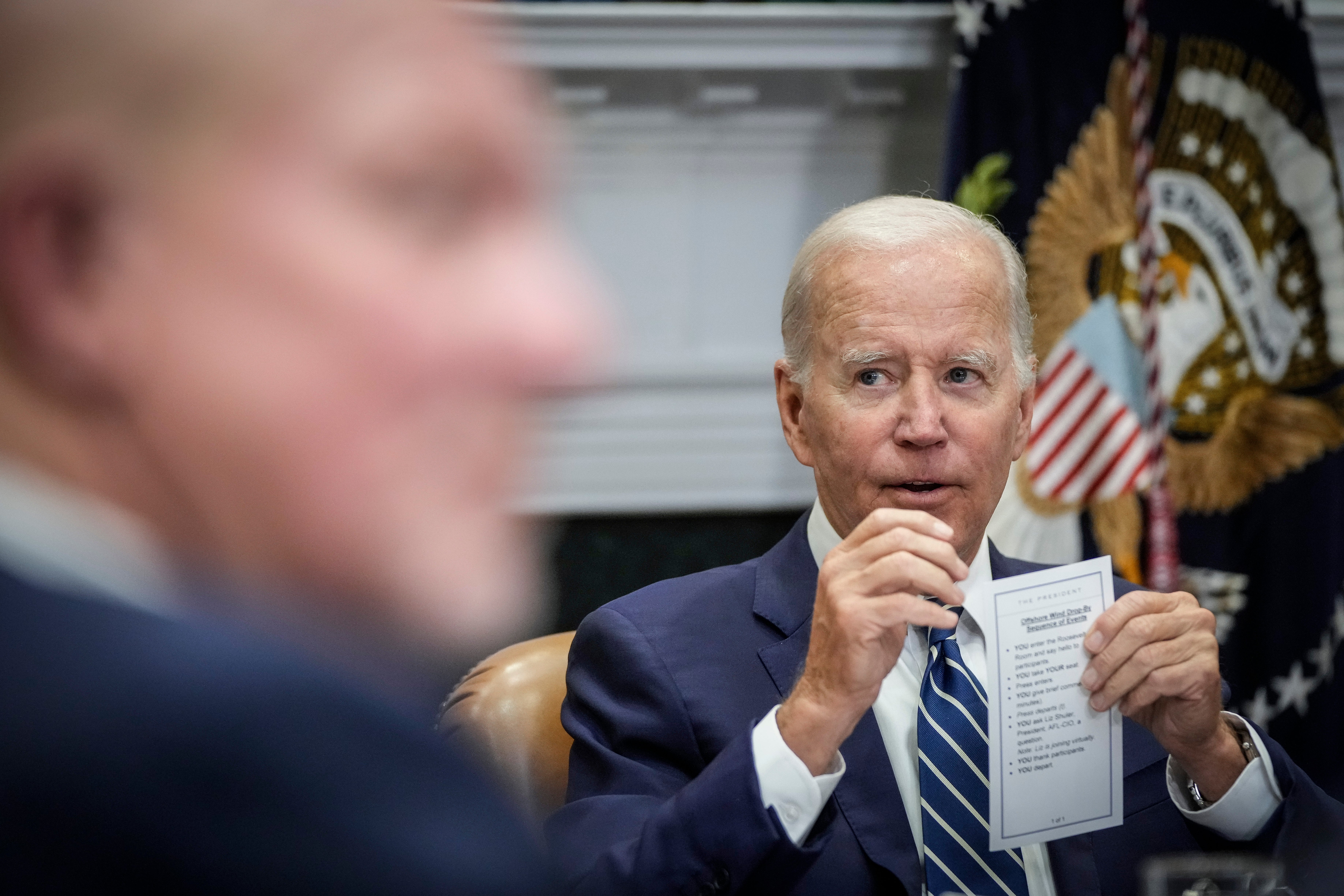 On Thursday, Biden made remarks during a “Meeting on Federal State Offshore Wind Implementation Partnership” where he had a binder with talking points and was handed a chart showing how tall the offshore wind turbines being discussed are compared to landmarks like the Empire State Building and the Eiffel Tower.

Later on, he held up a separate note card and was reading off of one side of it.

However, the other side of the note card facing the cameras had a list of directions for the president.

BIDEN WHITE HOUSE AVOIDS OVAL OFFICE  FOR PRESS EVENTS IN PART BECAUSE IT HAS NO TELEPROMPTER: REPORT

US President Joe Biden speaks while meeting with governors, labor leaders, and private companies launching the Federal-State Offshore Wind Implementation Partnership in the Roosevelt Room of the White House in Washington, D.C., US, on Thursday, June 23, 2022.  Photographer: Shawn Thew/EPA/Bloomberg via Getty Images

“YOU enter the Roosevelt Room and say hello to participants,” the first bullet point read. “YOU take YOUR seat.”

After a bullet point that said, “Press enters,” the next one read, “YOU give brief comments,” with a parenthetical statement reading, “2 minutes.” Biden ended up speaking for roughly eight minutes.

Once when the “Press departs,” Biden was then told, “YOU ask Liz Shuler, President, AFL-CIO, a question,” with a note that Shuler was “joining virtually.”

The final bullet points read, “YOU thank participants” and “YOU depart.”

US President Joe Biden speaks from his notes with governors, labor leaders, and private companies launching the Federal-State Offshore Wind Implementation Partnership as he drops by a meeting at the White House in Washington, DC, on June 23, 2022. (Photo by Jim WATSON / AFP) (Photo by JIM WATSON/AFP via Getty Images)

A White House official tells Fox News that this is a very standard format used by politicians and government officials at public events.

Hannah Hankins, a former White House communications official for then-President Obama told Fox News he too used a similar format of notes during his presidency.

This isn’t the first time Biden’s notes have gone viral. In March, he was seen holding a card reading, “Tough Putin Q&A Talking Points” during a news briefing about the Russia-Ukraine conflict.

During an event last July, the president was handed a note reading, “Sir, there is something on your chin.”

Biden isn’t the first president to have notes draw media attention. In 2018, President Trump was seen holding handwritten notes which included prepared responses like “I hear you” during a listening session at the White House with families of Parkland victims following the mass shooting at Marjory Stoneman Douglas High School.

Trump also had handwritten notes go viral that read, “I want no quid pro quo,” during his first impeachment trial in 2019.