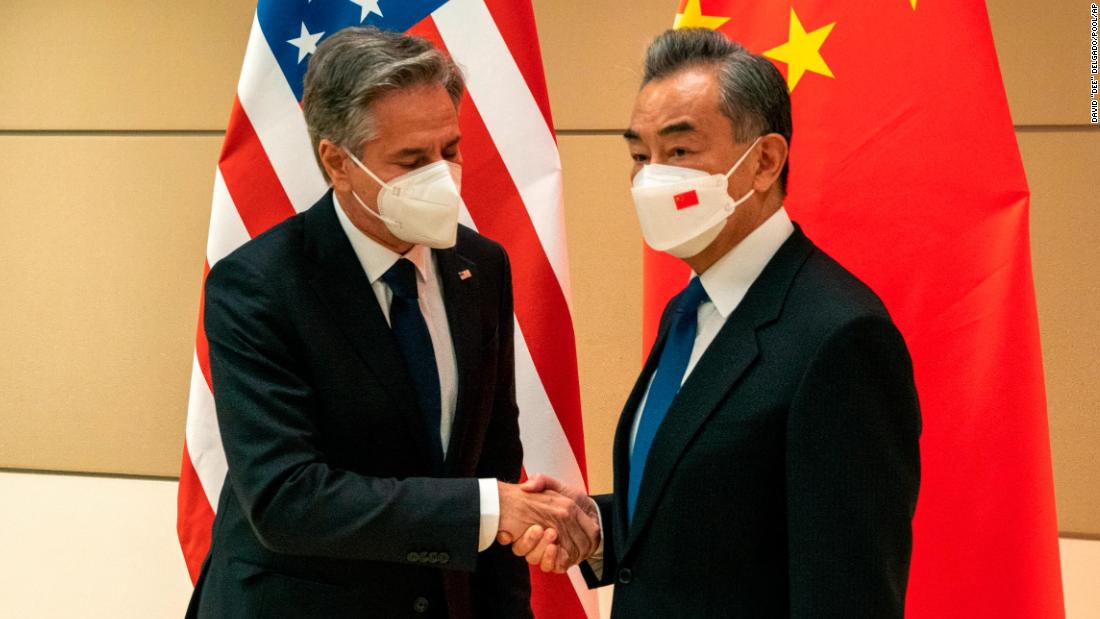 The meeting was held amid a period of heightened tensions between Washington and Beijing and capped a busy week of diplomacy for Blinken at the UN General Assembly, where he met with a series of fellow diplomats from around the world and delivered remarks rebuking Russia’s war in Ukraine at a UN Security Council meeting Thursday. It also came as Blinken grieves an immense personal loss — his father, Donald Blinken, died Thursday evening.

According to the official, the meeting with Wang was “extremely candid, direct, constructive and in depth,” and Blinken stressed “the need to maintain open lines of communication so that we can responsibly manage the US-China relationship, especially during times of tension.”

“Clearly, the differences between the United States and China are real, but we recognize the need to manage responsibly those differences and the competition between us,” they said.

Officials have described managing the relationship between the US and China as one of the most significant challenges facing the US. Relations between the two nations were made even more rocky following US House Speaker Nancy Pelosi’s visit to Taiwan in August, after which Beijing increased its provocations toward the island.

In a speech at the Asia Society Thursday, Wang warned that “as things stand, the Taiwan question is growing into the biggest risk in China-US relations.”

“Should it be mishandled, it is most likely to devastate our bilateral ties,” he said.

US President Joe Biden, in a “60 Minutes” interview that aired Sunday, was asked if US forces would defend Taiwan.

“Yes, if in fact there was an unprecedented attack,” he replied. US officials have said their policy toward the island has not changed, and according to the senior administration official, Blinken in his meeting Friday made this “crystal clear.”

He “stressed the importance of maintaining peace and stability across the Taiwan Strait,” the official said.

Blinken “also reiterated our strong condemnation of Russia’s unprovoked war against Ukraine, and he highlighted the implications if China were to provide material support to Russia’s invasion or engage in wholesale sanctions evasion,” they said.

In recent weeks President Vladimir Putin described China’s President Xi Jinping — a key ally to him — as having questions and concerns about the Ukraine situation. But the officials gave no indication that the meeting left Blinken with any expectation that China plans to take actions to oppose Russia’s invasion of Ukraine.

“I think the Chinese position, for better or for worse, is pretty clear and consistent and we have seen that through public comments,” the official said.

US Deputy Secretary of State Wendy Sherman said last Friday she believes the relationship between Moscow and Beijing is one “of convenience, not necessarily one of trust or one that will combine their efforts on all things.”

“This is not a full-flown marriage in all ways, shapes and form, but they are certainly going to work together, but they will also work for advantage with each other,” Sherman said in a conversation with Washington Post Live.

“It was quite interesting that President Putin made a remark that he knew that Xi Jinping had concerns about what he was doing in Ukraine,” she said. “Very interesting for Putin to say that.”

Sherman said she is “sure that Xi Jinping is looking for advantage while Russia is continuing its unprovoked, premeditated and horrifying invasion of Ukraine, a sovereign country.”

“Xi Jinping has constantly talked about sovereignty and territorial integrity so this doesn’t square with the principles he wants for his own views, whether it’s about Hong Kong or Tibet or Taiwan,” she said.