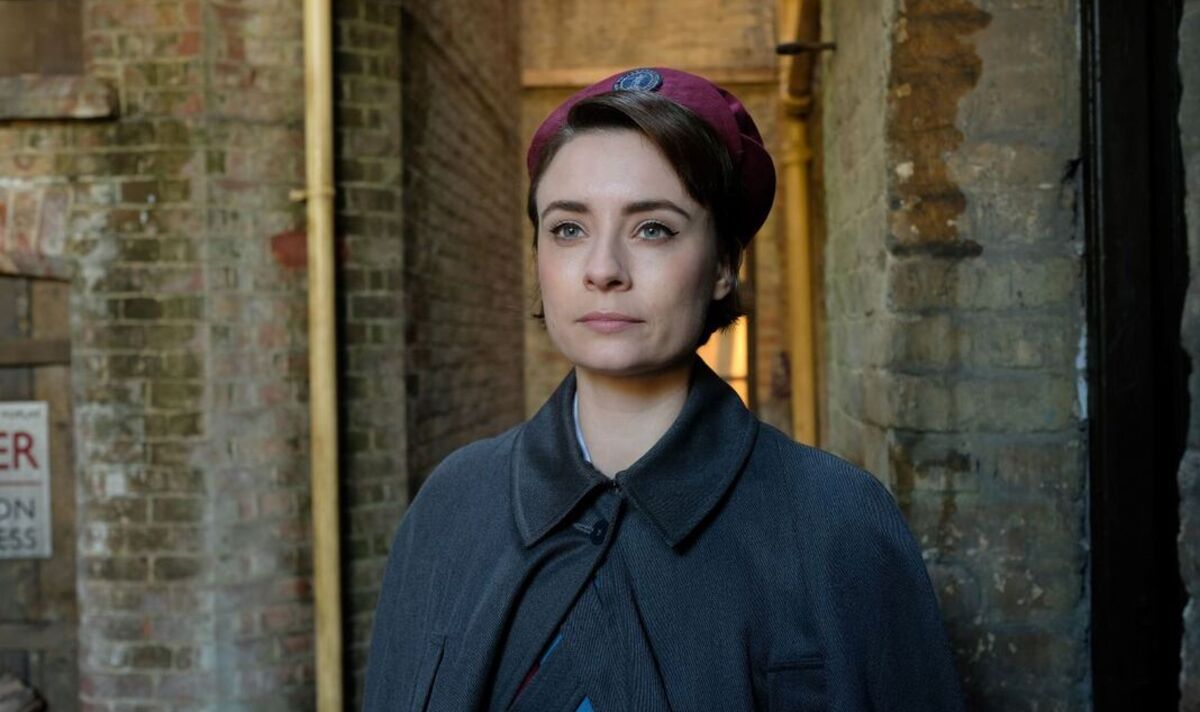 Now she is playing a half-human half-vampire hybrid in the more upmarket Vampire Academy…a role only slightly less bloody.

“We have three types of vampires,” Jennifer tells me. “The classic bloodsuckers, who are benevolent, then the bad, undead ones, and those like my character who are half-human and half-vampire who are guardians, protecting the good ones from the bad.

“In some ways it’s more glamorous than Poplar in the 1960s,” she adds, her blue eyes twinkling. “And there are more costume changes than Call The Midwife, but my character isn’t very glamorous. She’s a fighter, so she doesn’t get all the glitz.”

Milton Keynes-born Jennifer, 34 – Jen to her friends – plays two-fisted Alberta Casey who has “agility and speed and is very good at fighting”.

Does she have a love interest? “No,” she laughs, “she’s up for grabs.”

Yet for all the vampiric violence, Kirby suffered more pain in her first Royal Shakespeare Company stage production at Stratford-upon-Avon, eight years ago.

“The first night the adrenalin was running high and I fell over and smacked my face on the edge of the stage,” she recalls. “I thought I’d broken my cheek-bone, it was such a bang! And in my very last performance, I broke my foot. So, I literally topped and tailed it!”

Nobody ever expected Jennifer Kirby to become an actress, let alone a TV star – least of all her parents. “My mother was a teacher, and my father was a businessman,” she says. “I grew up in a little village outside of Great Malvern and came to acting quite late when I was fifteen.

“I was a very shy kid, so acting wasn’t a natural thing for me.”

The change happened by chance. “I’d chosen to do GCSE music but I was rubbish at it, so my only option was to do drama. I gave it a go and I was hooked! I felt a rush from my first lesson, my shyness just vanished.”

Her parents were surprised but supportive. “Although it took some persuading for people to believe I could make a career of it.”

What was she like back then? “A bit of a nerd,” she admits. “I was quite good; I had no teenage rebel phase. I enjoyed my own company. I read anything and everything. The first time I read Jane Eyre was a big moment for me; I devoured all of the Lord Of The Rings…

“I loved stories and immersing myself in other worlds, fantastical or historical, and acting also takes you to another world, something removed from my reality…”

None more so than the US supernatural saga Vampire Academy – very different from Jennifer’s 2015 TV debut in the more grounded medical soap Holby City.

Before that, Kirby’s career revolved around the stage. She did “a lot of plays” at the University of East Anglia, where she read English Literature and Drama, graduating in 2010, and spent two years at Lamda.

Kirby will be starring in Vampire Academy on Peacock (Image: Peacock via Getty)

A casting director caught her on stage and convinced her to audition, and consequently win, the part of Elizabeth Bennet in Pride And Prejudice.

The role, at Regent’s Park Open Air Theatre, saw her nominated for Outstanding Newcomer at the Evening Standard Theatre Awards. “I’m proudest of that part,” she says. “You can’t get more iconic than Elizabeth Bennet.”

Persuaded to audition for the RSC, she landed plum gigs as Lady Percy in Henry IV Part I & II and Katherine in Henry V.

“I was living a dream with the RSC. I had great parts and I got to work with Anthony Sher [Prince Hal in Henry IV] who had long been a hero of mine.”

It was also where the wry articular star met her other half, actor Robert Gilbert, last seen on TV’s Killing Eve.

Other strong stage roles followed, including Sylvia in The Recruiting Officer at Salisbury Playhouse and her mesmerising performance as Josie, a gun-toting Teddy Girl in Teddy, a critically acclaimed 2015 play set around south London’s Elephant & Castle in the 1950s, at Southwark Playhouse.

“It was such fun,” she says. “One of the reasons I got the Call The Midwife part was that a casting director saw me in that – everything is linked.”

Jennifer was in New York, touring with the RSC, when she sent in her audition tapes, not expecting to get the part.

She then spent “four joyful years” as ex-army nurse Valerie Dyer in the top-rated BBC drama, before leaving in 2020, and praises the show’s bold, often heart-rending storylines, which have included female genital mutilation and the thalidomide scandal.

“People who don’t watch it think it’s cosy and twee but it deals with hard-hitting issues in a sensitive way and I’m very proud of that.

“You also get weed on by babies. It’s messier than you think, and the birth scenes sometimes take over a full day to shoot for a couple of minutes of TV. I don’t think I’ve ever had such sore knees!

“You have to angle your body in strange ways but we had a lot of laughs, especially in scenes around the dinner table for hours. You get the giggles and you start to go slightly mad.”

Besotted Midwife fans do not chase her down streets though, not near her London home at any rate.

“I’ve been pretty lucky; I don’t really get recognised. I think it’s because I look so different – different costumes, different hair…

“I get the odd, “Aren’t you the woman from…?”, but I that’s more when I go back home. In London people are milling around, doing their own thing, and maybe they’re more used to seeing people off the telly.”

Vampire Academy, based on the best-selling young adult books by Richelle [CORR] Mead, is likely to win her a new generation of fans. It is set in St Vladimir’s boarding school and among a royal society of bloodsuckers and half-human “dhampirs”.

“It’s a secret world, fascinating and unique because of the folklore, and there’s a lot of vampire politics with power plays between the different classes.”

How does it compare to our own back-biting politics? “It’s just as messy,” she laughs.

The series was shot last winter in Pamplona, in northern Spain. “I flew out expecting to walk around in sunglasses but no. Most of it was filmed at night, so I was working weird vampiric hours, 8pm until 5am, often outdoors so it was chilling in both senses and quite surreal because there are a lot of people in crazy prosthetics.

“It got very cold, which gave it another level of atmosphere, you could see people’s breath.”

She rates it over other TV vamps. “I’m a big Buffy fan, it has the humour but also a huge amount of gravitas, and it has the romance of Twilight – I prefer it to Twilight. I’m hoping for another series.”

Jennifer spent the first lockdown in LA, another alien reality, where her love of reading kept her sane.

“I still read a lot, and love spending time with my partner and my sister Eleanor – they both make me laugh.”

She is pretty fit – Jennifer ran the London Landmarks half marathon in 2019 to raise money for the charity, Women & Children First.

“When I’m working, on a set or in rehearsals I feel completely fulfilled. Acting is exciting and stressful and it’s our living. I like to keep relaxed when I’m not acting and enjoy the little things in life.”

“You definitely won’t find me out on the town,” she laughs. “I like a good lie-down. I love sleeping, and I’m very good at it.”