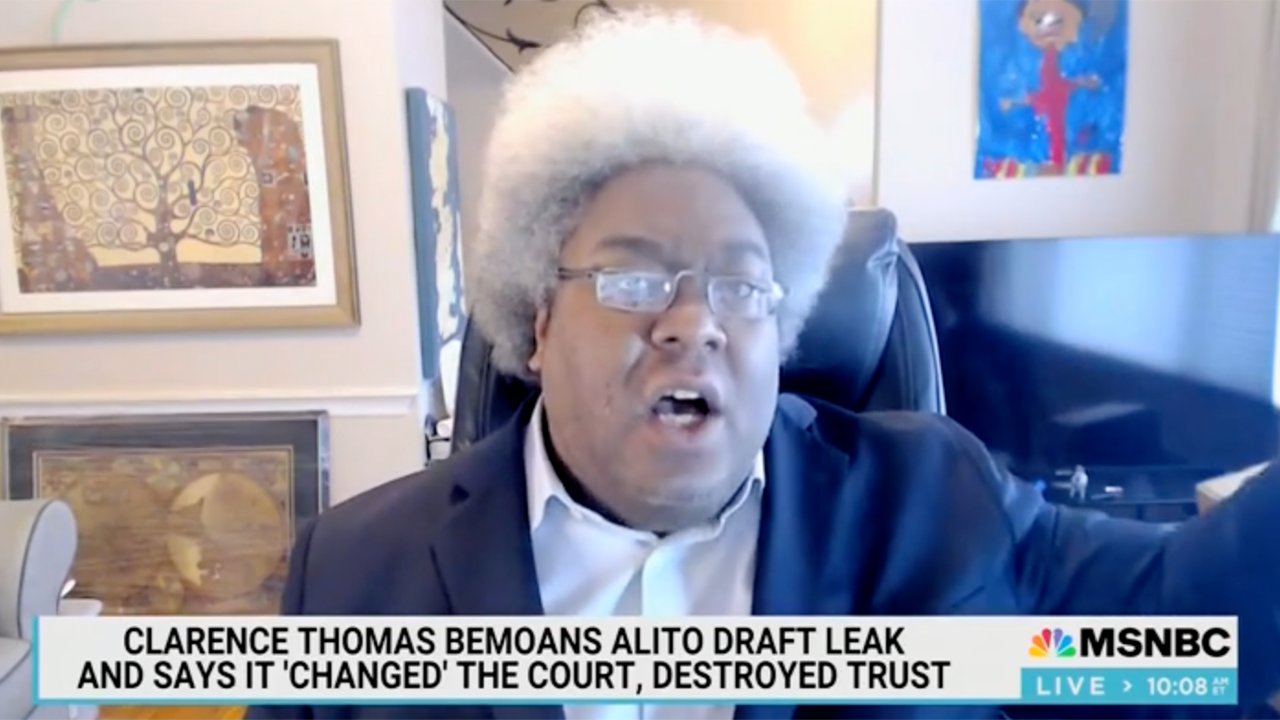 Elie Mystal raged against Supreme Court Justice Clarence Thomas during an episode of The Cross Connection on MSNBC May 14, 2022.

The Nation justice correspondent Elie Mystal insisted on MSNBC’s The Cross Connection with Tiffany Cross on Saturday that Supreme Court Justice Clarence Thomas is one of the “most corrupt justices in American history.”

He blasted the conservative member of the court for supposedly “lecturing” the American people on respecting the Court as an institution after the devastating draft opinion leak when he’s so “corrupt.”

Host Tiffany Cross prompted the outburst by playing video of Thomas giving a statement Friday about the leak of the Supreme Court draft opinion signaling the end of Roe v Wade.

Thomas described the leak as “an infidelity,” and said the belief in the secrecy within the institution is “gone forever.”

In the clip, he added, “When you lose that trust, especially in the institution that I’m in, it changes the institution fundamentally. You begin to look over your shoulder. It’s like kind of an infidelity that you can explain it, but you can’t undo it,” he told the audience.

After the video ended, Mystal wasted no time in burying the Supreme Court justice under a heap of condemnation.

Mystal began by declaring, “Clarence Thomas is arguably, with his wife, the most corrupt justice in American history.”

“We have never in American history had a situation where a justice’s spouse is out there advocating for things, pinning medals on people and then bringing those people to their spouse’s courtroom. That just doesn’t happen,” he continued.

Security fencing is in place outside the Supreme Court in Washington, Saturday, May 14, 2022, ahead of expected abortion right rallies later in the day. (Photo/Pablo Martinez Monsivais)

The left has been furious over the fact that Thomas’ wife, Ginni, had sent text messages to then-White House chief of staff Mark Meadows urging him to challenge Donald Trump’s 2020 election loss in the months following the election.

Thomas’ spouse is a lawyer who runs a political-lobbying firm and has a history of conservative political activism, which has prompted liberal fears that she has influenced the Court in some way.

Mystal tore into Thomas’ alleged hypocrisy. “For one of the – if not the – most corrupt justices in American history to then be lecturing other people on the sacredness of the institution, that is mind-bogglingly insulting, but this is what Clarence Thomas does.”

An anti-abortion activist attends a protest outside the Supreme Court building, ahead of arguments in the Mississippi abortion rights case Dobbs v. Jackson Women’s Health, in Washington, Dec. 1, 2021. REUTERS/Jonathan Ernst

“Nobody is willing to tell these people to stop and that’s why we are where we are,” he concluded.