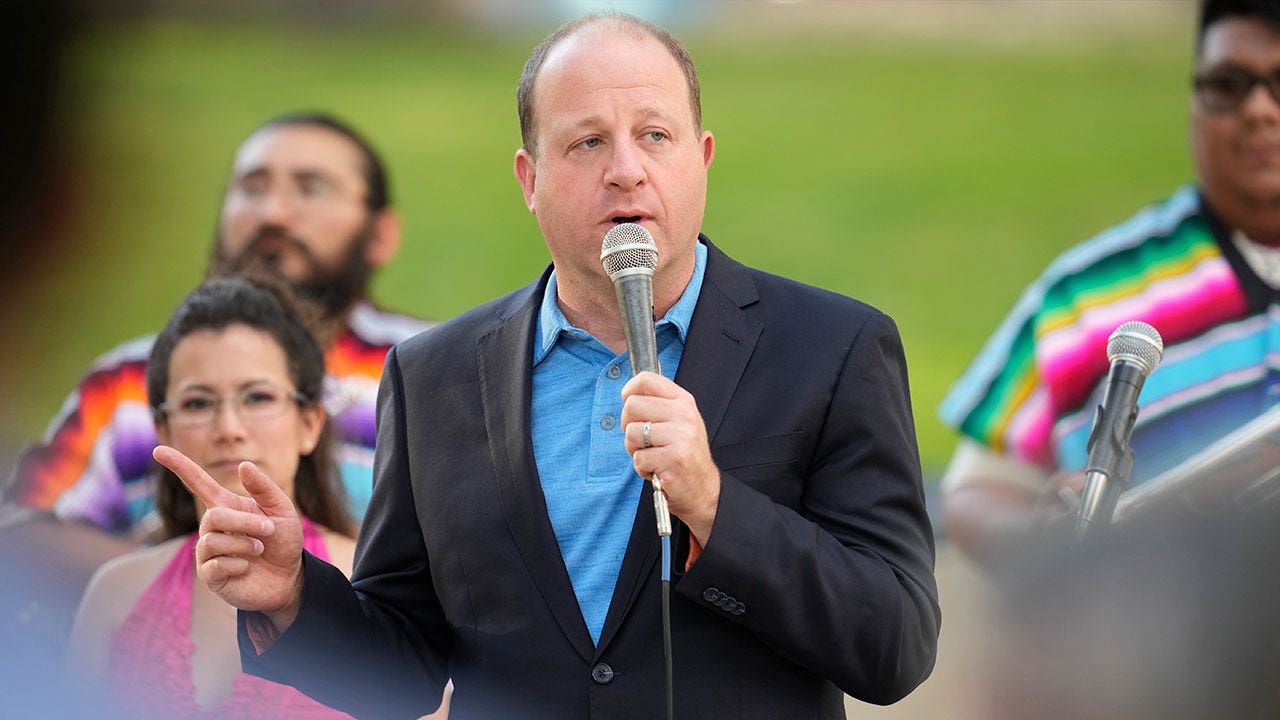 Colorado’s Democratic governor, Jared Polis, and his GOP challenger, Heidi Ganahl, offered differing versions of the state with the economy, crime, education and post-pandemic recovery among the top issues in their first debate Wednesday night.

Ganahl, a University of Colorado regent, bookended her remarks by attacking Polis over Colorado’s high fentanyl overdose rates, inflation and what she called poor education standards in public schools.

Polis defended his four-year record as governor by highlighting the state’s record job numbers while firing back at Ganahl for appointing a running mate who has claimed that Joe Biden was not legitimately elected president in 2020.

The debate was staged at Colorado State University-Pueblo, where red-shirted Ganahl supporters filled up most of the university’s ballroom. Polis’ backers held blue-bordered signs and kept to their own column of seats.

After Polis attacked Ganahl’s running mate, Danny Moore, for denying the 2020 presidential election outcome, Ganahl sidestepped the accusation of extremism. Moore has made it clear that he respects President Biden, she said, “and so do I.”

Ganahl, who describes herself as “a mom on a mission,” argued that rising crime and drug-related overdoses have harmed children and lambasted Polis for signing a 2019 law that weakened penalties for certain types of fentanyl possession. Ganahl pledged to declare a state of emergency over the fentanyl crisis and remove Colorado’s so-called sanctuary status for immigrants.

Polis defended other solutions to the drug crisis, including better treatment practices on top of more stringent penalties that the governor signed this year for the drug’s dealers.

The incumbent also attempted to flip the script on crime — a topic Republican candidates are hammering on across the country — claiming that Ganahl’s proposals to reduce the state gas tax and remove income taxes altogether would defund law enforcement officers and prisons across the state. He labeled her proposals as “defund the police.”

The remark brought forth groans from Ganahl’s supporters and Ganahl’s swift denial.

Both candidates walked a finer line on climate change policy as they try to garner votes in a state that still relies heavily on oil and natural gas extraction.

Ganahl proposed an all-solutions approach to energy policy, including coal and nuclear power. Polis championed a more green energy policy while tipping his hat to the oil industry. “You drive a Tesla,” he said to Ganahl, “I drive an internal combustion engine.”

Polis’ first term has been marked by early successes in expanding access to health care, capping the cost of certain health goods such as insulin, and expanding early childhood education. Thanks to Democratic majorities in the Legislature, he enacted a series of measures designed to curb health care costs and increase transparency. He instituted universal kindergarten and has launched an effort to achieve the same with pre-K students.

Democrats have come under criticism for a bill Polis signed in the wake of the George Floyd protests that lessened penalties for many small crimes, increased accountability for police misconduct and exposed police officers accused of misconduct to civil suits from the public.

Ganahl has tried to tie Polis to Biden in blaming both for inflation that’s eaten into the incomes of Coloradans. Polis this year expedited tax refunds and has delayed or lessened fees for many services and small businesses.

Ganahl also pledges to eliminate the state income tax to drive economic growth and reduce the size of the state bureaucracy.

Ganahl is the founder and former CEO of the pet care franchise Camp Bow Wow and also founded several charities, inclusing the children’s charity Moms Fight Back. She’s been involved in founding a charter school and advocates both school choice and a greater say by parents in their children’s education.

Wednesday’s debate was hosted by the Greater Pueblo Chamber of Commerce. The candidates have other debates and issue forums in the works in coming weeks.