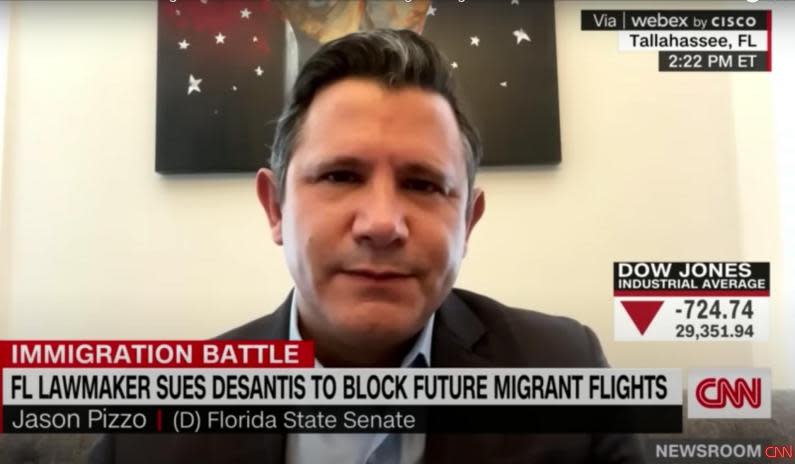 A Democratic Florida state senator who recently filed a lawsuit to block Governor DeSantis from sending migrants to other states has a history of supporting sanctuary cities and curtailing immigration enforcement.

Jason Pizzo, who represents Miami, sued DeSantis Thursday night, petitioning a judge to bar him from spending any more state funds on the transports. DeSantis facilitated the air travel of 48 migrants to Martha’s Vineyard from San Antonio last week. His administration said the migrants voluntarily consented to take the trip. Florida hired Vertol Systems Company, Inc. at a cost of $615,000 to send the migrants to the affluent island, Politico reported.

The state legislature passed a $109.9 billion budget earlier this year, with Pizzo and many other Democratic lawmakers voting in favor, that contained $12 million to ““facilitate the transport of unauthorized aliens from this state.”

In June 2019, Pizzo voted against a bill that would prohibit localities in the state from enacting sanctuary laws, which prohibits local police from communicating with the Immigration and Naturalization Service about the presence and status of illegal immigrants in the area. Martha’s Vineyard has been considered a sanctuary location by Republicans, although Democrats now reject that label.

In 2017, We Stand Together, an Island coalition that formed after the 2016 election, submitted a measure asking the island’s six towns “to refrain from using town funds and/or resources to enforce federal immigration laws, in keeping with current practices, unless presented with a criminal warrant, or other evidence or probable cause.” However, none of the six towns officially passed legislation to become sanctuaries.

Called out for green lighting a budget that authorized migrant shipments, Pizzo retorted on Twitter that the Martha’s Vineyard flights don’t apply under the provisions of the law. Citing the governor’s past tweets sympathizing with Venezuelans living under dictatorship, Pizzo claimed that DeSantis agrees that residents of that country are seeking asylum and therefore don’t qualify as “unauthorized aliens.” Moreover, Pizzo argued, Venezuelans from Texas are not “from this state.”

“Senator Pizzo never misses an opportunity for his 15 minutes of fame and is challenging an action on an appropriation he voted for,” DeSantis’ communications director Taryn Fenske told Politico.