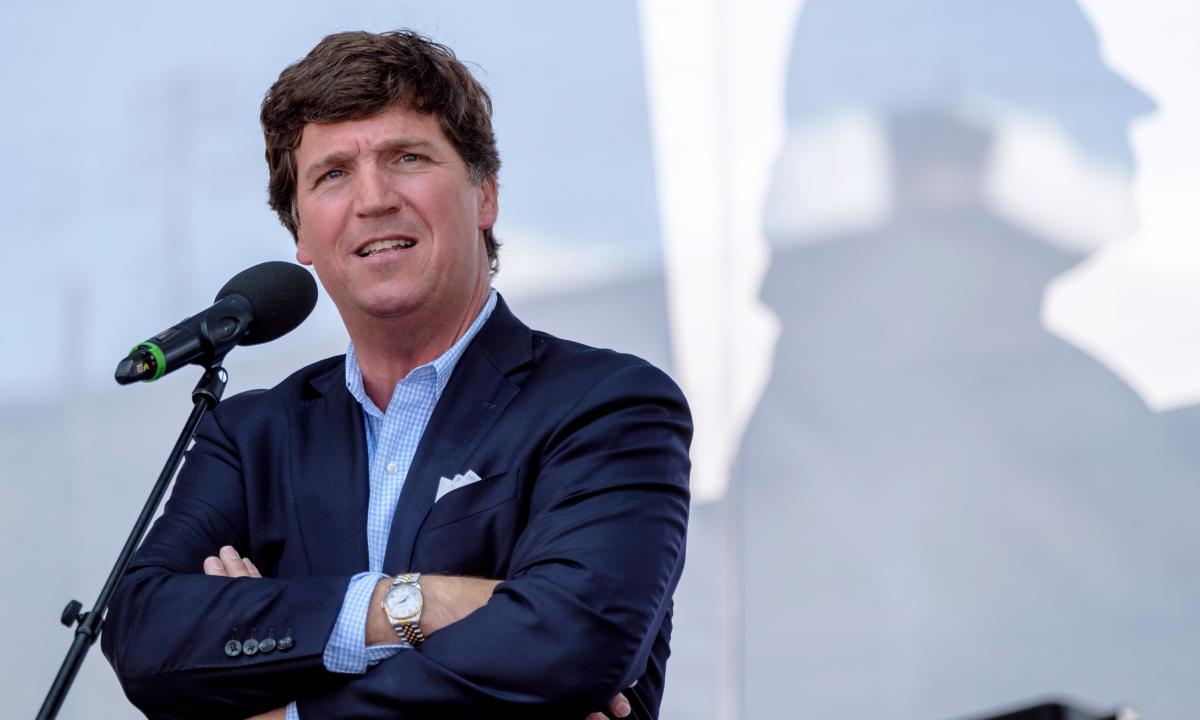 The rightwing Fox News host Tucker Carlson spoke at the funeral of Ralph “Sonny” Barger, the longtime president of the Hells Angels motorcycle club, in Stockton, California, on Saturday.

The Department of Justice (DoJ) considers the Hells Angels to be linked to organised crime.

According to one justice department study, although Barger “describe[d] the organisation as ‘a bunch of fun-loving guys who just ride motorcycles’ … research data show that the Hells Angels are involved in murder; the manufacturing and distribution of methamphetamine; the distribution of cocaine, heroin, and marijuana; the purchase and sale of firearms; and other criminal activities.”

Tucker Swanson McNear Carlson, the son of a media executive who married an heiress to the Swanson frozen dinner empire, attended a private school in Rhode Island and Trinity College, a liberal arts college in Hartford, Connecticut.

At Barger’s funeral, wearing a blue button-down shirt and chinos, he described to the assembled bikers what he said was the biker leader’s credo: “Stand tall, stay loyal, remain free and always value honor.”

He asked: “Is there a phrase that sums up more perfectly what I want to be, what I aspire to be, and the kind of man I respect?”

Carlson also said Joe Biden “should be saying” Barger’s words “every single morning as he salutes the flag”.

Fox News did not immediately respond to a request for comment.

Barger was 83 when he died from throat cancer in June. He joined the Hells Angels in 1957.

According to his Guardian obituary, he became “the epitome of the outlaw biker … an image he cultivated with charisma and shrewdness, turning Hells Angels into a worldwide brand.

“Though law enforcement saw the Angels as more of a gang than a club, in the 1960s the media latched on to Barger … selling the outlaw image to the world as a form of countercultural protest … in films such as Easy Rider (1969).”

Also in 1969, Hells Angels provided security at a Rolling Stones concert at Altamont, California. A fan, Meredith Hunter, was stabbed to death by a gang member.

Barger’s Guardian obituary also noted that “in 1979 Barger was one of 33 people charged with racketeering under federal Rico (Racketeer Influenced and Corrupt Organizations Act) laws. Though the outcome of most cases was mistrial, he and [his wife] Sharon were the only two acquitted outright”.

In Stockton, law enforcement warned of violence at Barger’s funeral but the event passed without incident. Local media said about 7,000 attended.

Carlson said of Barger: “And I thought, that’s the outlaw biker that every mom in my neighborhood was scared shitless of as a child?

“That’s Sonny Barger’s worldview? Why aren’t we hearing that from the people who run the country? Why is it left to Sonny Barger to say, ‘Stand tall, stay loyal, remain free, and always value honor?’

“The president of the United States should be saying that – every single morning as he salutes the flag – but only Sonny Barger is saying it. And I thought to myself, ‘I want to pay tribute to the man who spoke those words.’”

The man who spoke those words’ run-ins with the law did not end when he was acquitted on racketeering charges.

As his Guardian obituary described it, in 1987 he “was again arrested on federal conspiracy charges of drug and gun running in California, but found himself on trial in Louisville, Kentucky, accused of supplying explosives to destroy the Outlaws motorcycle gang there in a territorial dispute.

“He was convicted and served three and a half years of a four-year sentence. He insisted he had been entrapped by the FBI.”

Later, “he married Beth Noel (nee Black). They divorced after a domestic dispute in which she was hospitalised for a broken rib and lacerated spleen. He was convicted of aggravated assault, but served only eight days in jail.

“With warfare between gangs intensifying, in 2002 he tried to organise a peace conference at the Laughlin River Run rally in Nevada, but a battle between Hells Angels and Mongols left three dead, and the conference was cancelled.”