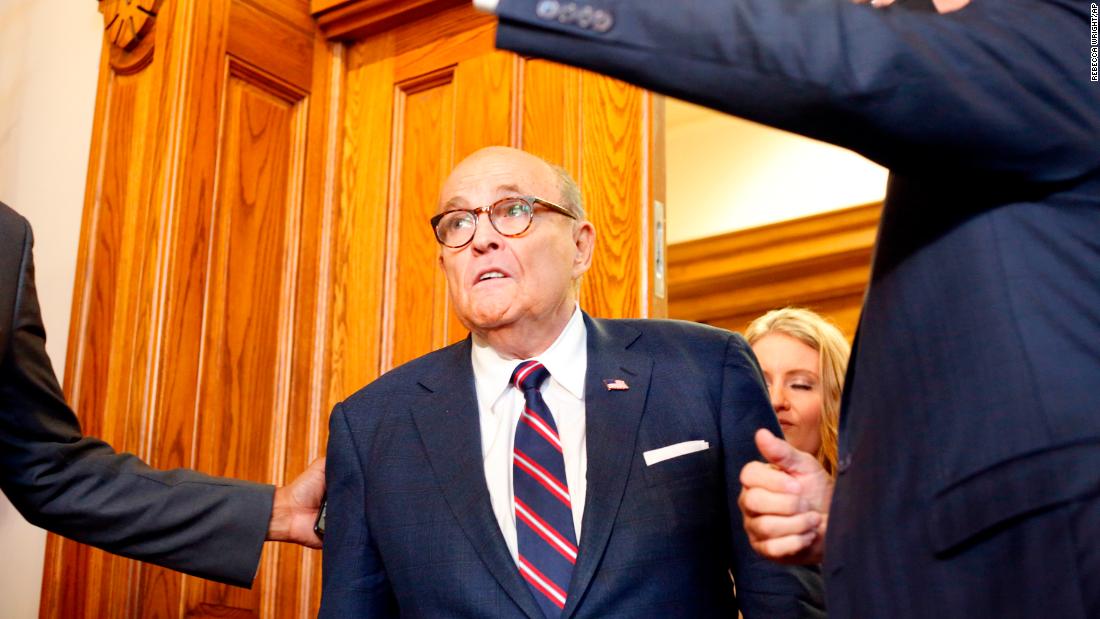 News
admin
June 24, 2022June 24, 2022
The special purpose grand jury — which has been investigating whether former President Donald Trump or his allies violated the law in their efforts to flip the 2020 election results in Georgia — has heard testimony from at least four witnesses regarding Giuliani’s activities. Three of those witnesses were Georgia Democratic lawmakers, who testified this week and were at the state Capitol when Giuliani and other Trump lawyers shared conspiracy theory-laden claims of voter fraud in December 2020.

Fulton County District Attorney Fani Willis, who is leading the investigation, has sought evidence on potential crimes including solicitation of election fraud, making false statements to state and local government bodies, and conspiracy.

Bob Costello, an attorney for Giuliani, said the only inquiry he’s had from Fulton County was from someone, perhaps a detective, inquiring whether he would accept service for something on Giuliani’s behalf. Costello said he didn’t know whether it had been an attempt to serve a subpoena because he had declined to accept service.

Whether Giuliani could face any legal headaches from his activities in the state around the election, Costello said: “It’s hard to worry when you don’t know anything about it.”

On December 3, 2020, state Sens. Jen Jordan and Elena Parent — both of whom confirmed to CNN they had testified before the grand jury — were at the Georgia Senate Judiciary subcommittee hearing about election integrity in which Giuliani, then a Trump lawyer, spread conspiracy theories about what he referred to as widespread irregularities and fraud in the state.

“The focus seemed to be, obviously, this Senate subcommittee meeting where Giuliani was present and effectively did his dog and pony show without anyone pushing back,” Jordan, a Democrat, told CNN in an interview about her grand jury testimony.

Jordan, who is also a lawyer and is running for state attorney general, told CNN she had been questioned for almost two hours. Portions of her grand jury testimony focused on Giuliani’s unusual appearance at the hearing, where he played heavily edited video of Fulton County election workers and urged lawmakers to ignore the statewide results and appoint a slate of pro-Trump electors.

While video of Giuliani’s appearances before lawmakers was made public at the time, investigators were interested in the unusual fashion in which the hearings had come together, lawmakers’ impressions of the information that was being shared and the suggestion that lawmakers pursue an alternate slate of electors.

Jordan said it seemed clear to her that Trump’s legal team and Republican lawmakers had conspired “to present a false narrative that went beyond just trying to affect public opinion.”

“It was intended to give legitimacy or provide a foundation for there to be legislative action to, you know, basically throw aside the slate of electors,” Jordan added.

Numerous state and federal officials have debunked Giuliani’s claims of fraud in a state that Joe Biden won by nearly 12,000 votes. Byung “Bjay” Pak, the former top federal prosecutor for the Northern District of Georgia, was among those who testified before the US House select committee investigating the January 6, 2021, insurrection that Giuliani’s claims of election fraud in Fulton County had been investigated by federal authorities and found to be untrue.

On December 30, 2020, Giuliani and other Trump operatives once again returned to the Georgia Capitol, for a second time falsely telling state lawmakers that there were widespread election irregularities.

“There are 10 ways to demonstrate that this election was stolen, that the votes were phony, that there were a lot of them, dead people, felons, phony ballots,” Giuliani said at the time.

“It’s very surreal to go back and put together all these moving pieces that led up to the attempt to overturn the results of the election and led up to the aftermath of January 6,” Georgia state Rep. Bee Nguyen, who also testified before the grand jury, told CNN as she left the Atlanta courthouse. “It’s very surreal that the Georgia legislature was part of this, and that these hearings took place in our legislative body.”
Nguyen, a Democrat, is set to challenge Georgia Secretary of State Brad Raffensperger in November in the race for the state’s top election job. She said she had testified for about two hours Thursday and the questions focused on what she had witnessed in the room at the Georgia legislature on December 30, 2020.

While Giuliani’s testimony seemed absurd at the time, Jordan said, she now believes they narrowly avoided a constitutional crisis.

“I was kind of like, this can’t be serious, because everything they’re saying is so ridiculous,” Jordan said. “Now, in retrospect, we really did dodge a bullet in terms of our democracy, because these folks were not playing.”