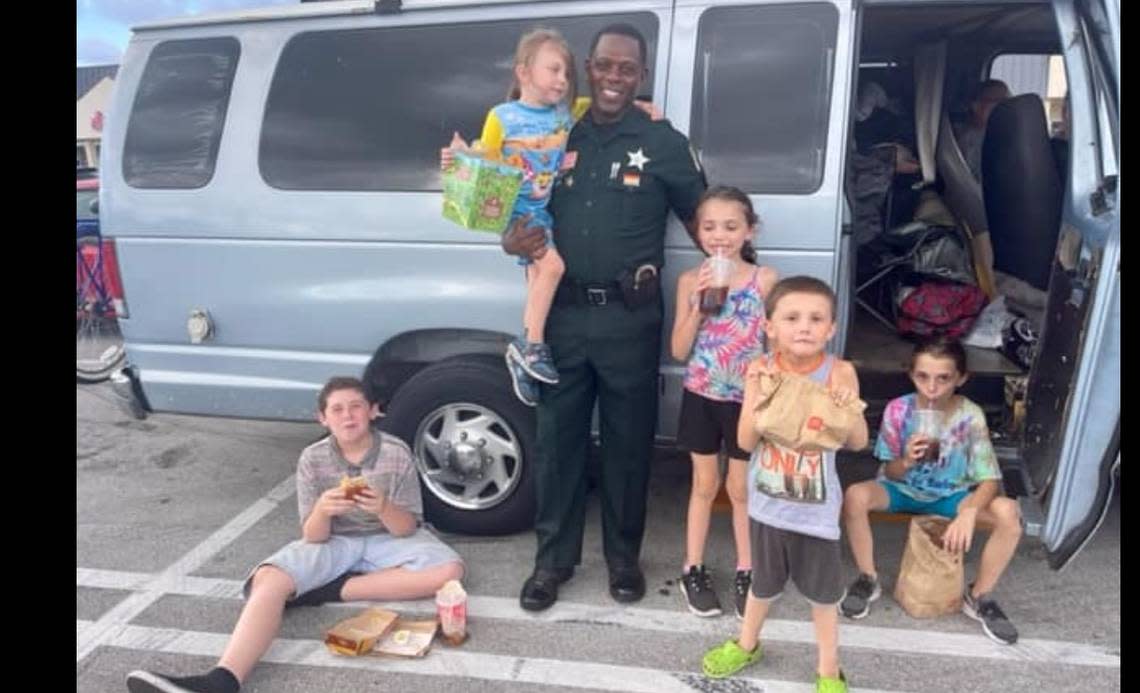 “Grab a tissue and listen to this story,” begins a Thursday Facebook post from the Palm Beach County Sheriff’s Office.

The agency says that the day before, a deputy on patrol pulled into the parking lot of an Office Depot in the Lake Worth area to check text messages about families in need of assistance. Deputy Kenneth Torrence, aka “Coach T,”also mentors youth in the community.

Turns out a family in need was just about 25 yards away.

Deputy Torrence noticed five small children step out of a van one by one and sit on the ground, and drove over to get a closer look.

Two women, later identified as the mother and grandmother, were sitting inside the vehicle.

The deputy asked if everything was OK and “Ms. Tammy,” the grandmother, said they were waiting for her husband who was inside a store “donating plasma for money.”

Torrence then informed the women that his job duties allow him to help with the kids.

“Ms. Tammy was very apprehensive,” said the post. “I continued to be purposeful, observing that this is a serious case of homelessness.”

The cop asked the kids if they’d had their breakfast and saw the kids eating granola bars on the ground. He then offered to buy them food from McDonald’s, and “tears started down” Tammy’s face. She admitted that they were homeless living out of their van.

Pictures on the post show the deputy picking up a bunch of morning meals from a nearby McDonald’s as well as the family of eight enjoying the feast in front of the van.

Next up: getting these folks off the streets. They were reportedly placed in a hotel until permanent housing can be found; groceries were bought to fill their fridge — and bellies.

The post, which received over 2,000 likes, ends with information about how people can support the sheriff’s office homeless outreach efforts. If interested, send an email to [email protected]

One thought on “‘Grab a tissue’: See what a Florida cop did after spotting five children inside a van”