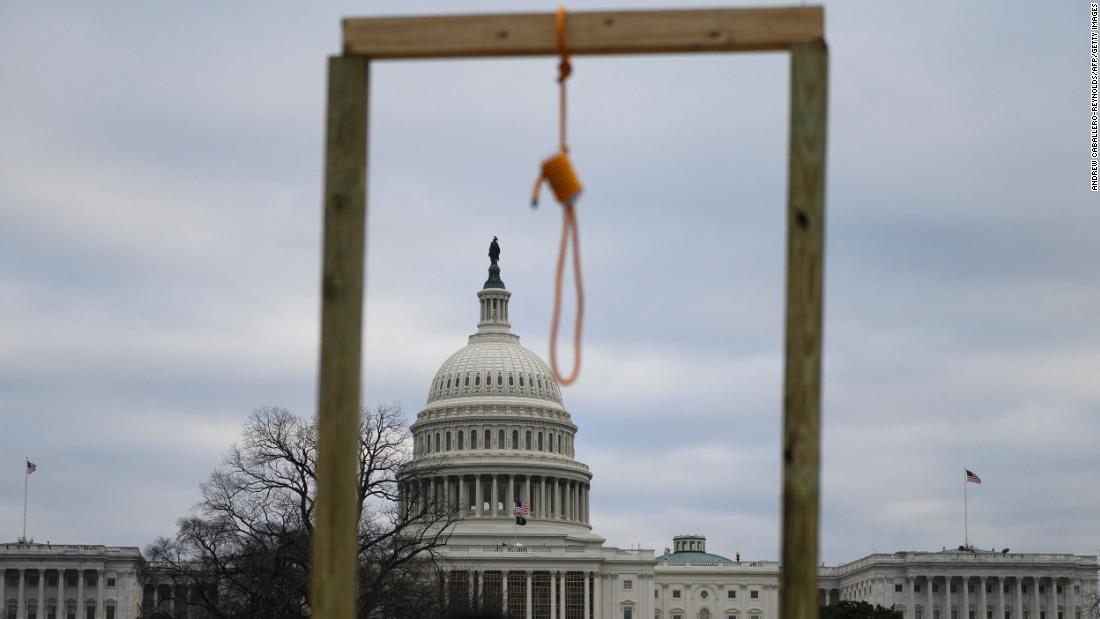 Users on these platforms are openly calling for the execution of committee members, with Wyoming Rep. Liz Cheney appearing to be a specific target. Calls for former Vice President Mike Pence to be hanged, that were chanted throughout Washington DC on January 6, continue to be echoed online.

Determining what is just rhetoric and what might be an active threat is a challenge for law enforcement.

Cohen described the monitoring of social media as a “resource intensive process that has to involve federal, state and local authorities who are working together, who are operating under strict protocols that ensure that they are able to distinguish between constitutionally protected speech and threat-related activity.”

“We’re in a highly volatile and complex threat period,” he added.

The online threats continue as Illinois Republican Rep. Adam Kinzinger revealed Sunday he received a letter in the mail that threatened to execute him, his wife and their newborn.

The decision by both Facebook and Twitter to kick then-President Donald Trump off its platforms for rule-breaking after the insurrection was a boon to a developing cottage industry of alternative social media platforms.

The alternative sites, like Trump’s Truth Social platform, which launched in February, market themselves as bastions of free speech, capitalizing on the perception among some Republicans that they have been unfairly censored by Silicon Valley. Truth Social says it “seeks to create a free speech haven in the social media sphere and encourages your unencumbered free expression.” Its terms of service say posts should not be “violent” or “harassing.”

An analysis by the group Advance Democracy, a not-for-profit that conducts public interest investigations, shared with CNN found posts on Truth Social calling for the execution of January 6 committee members and others. The researchers searched for specific terms on the platforms like “execute.”

One post on Truth Social includes a picture of a noose and reads, “The J6 committee are guilty of treason. Perpetuation of a insurrection hang them all.”

On another post referencing Cheney, a user posted a GIF of a guillotine with the message, “#MGGA #MakeGuillotinesGreatAgain.”

CNN asked Truth Social about several posts containing violent rhetoric on Tuesday, including the posts with a picture of a noose and a GIF of a guillotine. Truth Social did not respond to CNN’s requests for comment, but by Wednesday, the posts appeared to have been removed from the platform.

In addition to Truth Social, Advance Democracy also observed violent rhetoric linked to the January 6 committee posted to other alternative social media platforms 4chan — which was used by the suspect in the mass shooting in Buffalo, New York — as well as on Gab and on another message board popular among some Trump supporters.

While many of the posts Advance Democracy identified appeared to have little engagement, all the posts are illustrative of a trend of frequent invocation of violence in these online communities.

On a pro-Trump message board a user commented earlier this month, “IF we ever decide to storm the capital again, I promise we won’t make the mistake of being unarmed a second time.”

4Chan did not respond to CNN’s requests for comment.

Andrew Torba, the CEO of Gab told CNN, “Gab permits all lawful political speech that is protected by the First Amendment—including speech about inherently political topics such as the charge and punishment of treason through the US judicial system. When discsion crosses into direct and imminent threats of violence we will take action and work with our partners in law enforcement to mitigate any threats to the public.”

While many people posting on these sites will never go on to commit violence, others will — as evidenced by the social media posts of some of those charged for their role in the insurrection.

“Given the lack of content moderation on fringe platforms inhabited by far-right communities, the volume of threats is much higher than on mainstream platforms,” Ben Decker, the CEO of Memetica, a digital investigations company told CNN.

Decker said that most concerning some of these posts appear to encourage “real-world violence [and] are not dissimilar from many of the threats that emerged in the weeks leading up to January 6.”

Daniel J. Jones, the president of Advance Democracy, said the online threats appear to come from people who falsely believe the 2020 election was stolen. “It’s clear that the lies and actions taken by Trump, and those lawmakers that support him, continue to pose a serious threat to our democracy and the peaceful transition of power,” he said.

The United States Capitol Police had no comment. CNN has also reached out to the FBI, Pence’s office and Cheney’s office for comment.