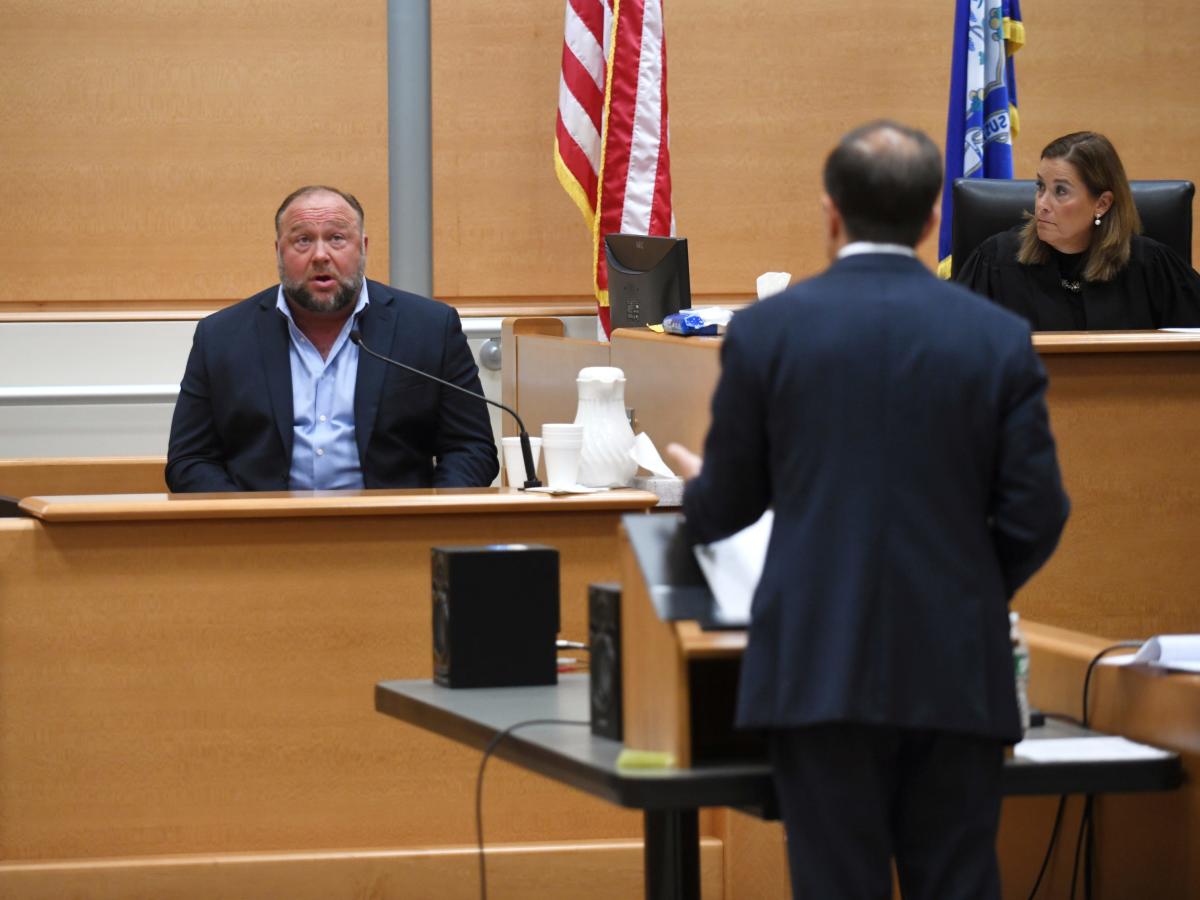 In day of defiant testimony, Alex Jones got into a heated exchange with the lead attorney representing families of victims who died in the 2012 Sandy Hook shooting after he devolved into a rant about liberals in a Connecticut courtroom Thursday.

Jones is currently standing trial to determine how much he will have to pay the families of victims he’s been found liable of defaming by claiming the shooting was a government-orchestrated hoax. This is the second  week of what’s expected to be a four to six-week long trial involving 15 plaintiffs — most of whom were parents of the victims. Twenty first-graders and six adults were killed in the December 14, 2012, shooting.

Jones and the plaintiff’s lead attorney, Chris Mattei, got into a shouting match Thursday — Jones’ first day on the stand — after Mattei asked Jones if he had put a target on the back of Robbie Parker, whose 6-year-old daughter was killed in the shooting. Jones has accused Parker of being a crisis actor. The court was shown a video of Parker speaking to the media shortly after the shooting. As the clip played, which multiple family members in the galley started crying.

“You put a target on his back just like you did every single parent and loved one sitting here didn’t you?” Mattei said, to which Jones responded that he did not.

Mattei pointed to the crowd of Sandy Hook victims’ families sitting in the courtroom and said “these are real people.”

Jones responded: “Just like all the Iraqis that you liberals kill and love.”

“You’re unbelievable. You switch on emotions on and off when you want. It’s just ambulance chasing,” Jones told Mattei.

“Why don’t you show a little respect in this courtroom,” Mattei shot back.

Jones’ attorney, Norm Pattis, objected several times during the exchange, calling Mattei’s questioning argumentative. But because the trio kept talking over each other, Judge Barbara Bellis was unable to rule on the objections, saying “it’s hard for me to get a word in edgewise.”

Throughout the day, Bellis repeatedly admonished Jones to stop talking whenever his lawyer made an objection.

By the end of the day, Bellis was reaching a breaking point. After the jury left the courtroom, she warned Pattis to get his client under control or they would both risk being held in contempt of court.

“There’s only so many times I can tell someone, ‘Don’t answer a question when your attorney objects,'” Bellis said. “I’m trying to be as polite as possible.”

This is the second of three similar trials to determine damages. The first of those trials wrapped up in August, with an Austin jury ordering Jones to pay the parents of 6-year-old Sandy Hook victim Jesse Lewis nearly $50 million. A third trial back in Texas is pending from Leonard Pozner and Veronique de la Rosa, the parents of victim Noah Pozner.

During the Texas trial, Jones admitted the shooting was “100% real” and apologized for “unintentionally” hurting the feelings of the victims’ families.

But he seemed to backtrack a bit on Thursday.

“I legitimately thought it might have been staged and I stand by that and I don’t apologize for it,” he added.

One thought on “Heated exchange erupts between Alex Jones and lead attorney in Sandy Hook ‘hoax’ trial: ‘Why don’t you show a little respect?’”