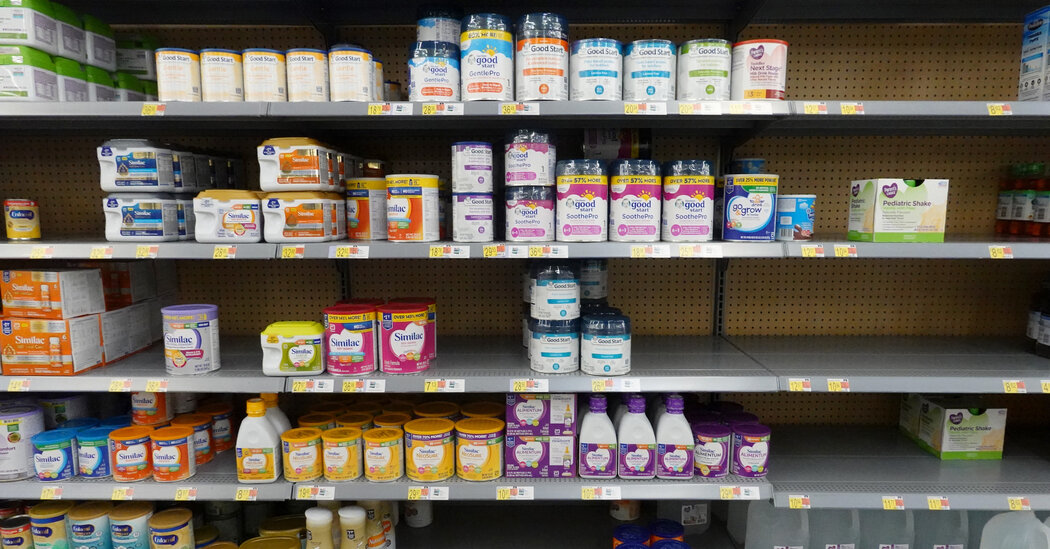 If your baby is on a special formula because of prematurity or other health issues, double-check with your pediatrician before switching, Dr. Playforth suggested, just to be sure you’re making a safe choice.

Navigating the Baby Formula Shortage in the U.S.

A growing problem. A nationwide shortage of baby formula — triggered in part by supply-chain issues and worsened by a recall by the baby food manufacturer Abbott Nutrition — has left parents confused and concerned. Here are some ways to manage this uncertainty:

Finding formula. If your baby’s formula was not affected by the recall, but is still not available, you can try calling local stores to ask when they expect to get it back in stock. You may also be able to buy it online. If your baby is on special formula, reach out to your doctor’s office: They might have samples in stock.

Picking a new formula. If you typically use a name-brand formula, look for its generic version. Alternatively, seek a new formula that matches the ingredients listed in your usual one. If your baby is on a special formula for health reasons, check with your pediatrician before switching.

Transitioning to a new product. Ideally, you will want to switch your child gradually. Start by mixing three quarters of your usual formula with one quarter of the new one and gradually phase out the old product. If you can’t transition gradually because you’ve run out of your usual formula, that’s OK, although you might notice more gassiness or fussiness during the transition.

What not to do. If you can’t find your baby’s usual formula, don’t make your own — homemade formulas are often nutritionally inadequate and at risk of contamination. Don’t try to “stretch” your formula by adding extra water, and don’t buy it from unvetted online marketplaces like Craigslist. For a baby less than 1 year old, don’t use toddler formula.

If you can’t transition gradually because you’ve run out of your usual formula, that’s OK — your baby will be fine, Ms. Moore said, although you might notice more gassiness or fussiness during the transition. That is expected, and normal, for the first two weeks after switching formulas, she added. If you do see worrying symptoms — such as blood in your baby’s stool, a rash or signs that your baby is having trouble breathing — they could be a sign of an allergy and you should stop feeding them the new formula and call your pediatrician immediately, Dr. Young said.

If you’re running low on formula, never dilute it. Continue to follow the preparation directions listed on the package. “Changing the ratio of formula to water can be extremely dangerous for infants and lead to water intoxication, electrolyte imbalances and seizures,” Dr. Playforth said.

Likewise, never make your own formula at home, as doing so can cause nutritional deficiencies and other health issues, Dr. Playforth added. A 2020 study analyzed 144 online baby formula recipes, finding that nearly half included ingredients that could cause food-borne illness.