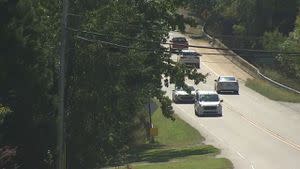 A mother said her 5-year-old twins were found walking alone on a busy highway in Iredell County last Thursday.

According to Melissa Reid, the boys were supposed to be in Central Elementary School’s afterschool program, but instead, they got on their school bus and were dropped off at their stop alone, with no parent in sight.

She said they tried walking back to school but ended up on Highway 115, more than a quarter-mile away.

“I mean, just thinking of the fact that they could have possibly misstepped and gotten to traffic. I mean, just kidnapped was a big thing for me,” Reid said.

That was until Cynthia Clark, who spent 25 years in law enforcement, spotted them.

“I thought, what in the world are babies doing on this highway?” she said.

Clark said her instincts kicked in. She pulled over, asked what happened and offered to take the boys back to school.

Reid said this could have been avoided if the bus driver had returned her kids to the school.

“They don’t ever drop off kids at the bus stop unless there are adults there or parent(s),” she said.

Channel 9′s Almiya White contacted Iredell-Statesville Schools about the incident. The district said drivers are encouraged to make sure there’s a parent or older sibling there when young kids are dropped off, but it isn’t an actual policy. They said in this case, there was a miscommunication between the parent, the school and the kids about whether they should have been on the bus or in afterschool care.

“I feel like when no one was there, there’s no way I would let those babies off,” Clark said.

Reid said she’s glad Clark was driving along the highway when she was.

“She really saved their lives, and I really am appreciative to her for that,” Reid said.

In hopes of preventing a similar situation, Reid said she made signs for her children that say, “I’m primetime [name of afterschool program] today or I’m a bus rider.”

(WATCH BELOW: ‘Had to get help’: SC bus driver commended by district for quick action during fight)

One thought on “‘I freaked out’: Woman finds 2 boys walking along busy highway after getting off school bus”