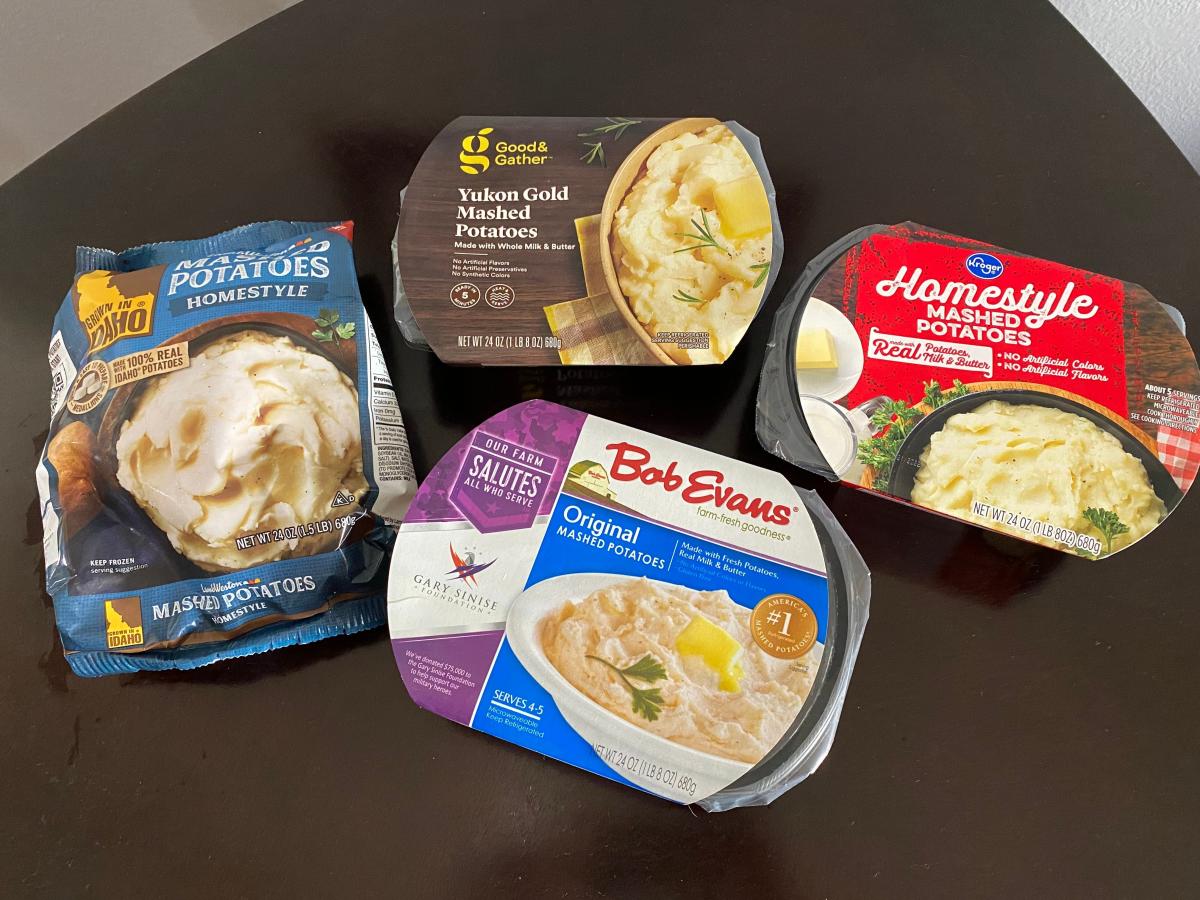 I usually make my own mashed potatoes, but the premade variety is helpful in a pinch.

When it comes to mashed potatoes, I prefer taking a little extra time to make them from scratch.

But from time to time, when I want some immediate comfort food, I’ll turn to the premade version from the grocery store — I think they’re an upgrade from instant varieties.

I’m most familiar with Bob Evans and the Kroger-brand mashed potatoes since I normally shop at Ralph’s, a Kroger-owned grocery chain. But with a little searching, I also found that Target’s Good & Gather line has an entry, and Lamb Weston makes a frozen premade variety.

I decided to try all four to determine which brand makes the best premade mashed potatoes.

The Bob Evans potatoes take a little longer than the other microwavable options.

Although the other microwavable potatoes took about three to four minutes to cook, this one from the popular restaurant chain’s brand took five, plus an extra two minutes to sit and cool.

Out of the fridge, the potatoes looked very thick, so it made sense they’d take longer to heat thoroughly.

I simply opened the corner of the film on the container, put it in for three minutes, opened the film more and stirred, and returned it to the microwave for two more minutes.

The mashed potatoes were incredibly thick but still smooth.

The potatoes didn’t have much of a smell to them — I expected more of a buttery aroma.

They also looked very thick. I could see a good amount of black pepper and a few little pieces of potato skins throughout.

I was concerned the bits of potato skins would cause issues with the texture, but that wasn’t the case at all. They were just as thick as they appeared, but they were really smooth without any lumps.

The flavor was strong on the black pepper but not buttery, and it could’ve used a little more salt.

The Kroger variety had some interesting heating instructions.

Most microwavable foods say to puncture or open the plastic film, but the instructions on the Kroger mashed potatoes said to leave it on at first.

I placed the container of potatoes on a microwave-safe plate, an instruction I almost skipped and am glad I didn’t. The potatoes leaked out a bit onto the plate and would’ve made a mess in the microwave without it.

I microwaved them as directed for three minutes, removed the film entirely, stirred the potatoes, and cooked them for one more minute. But I think I could’ve skipped the extra minute (an optional step in the directions).

The potatoes had great flavor, but the texture was a little lumpy.

The Kroger potatoes had a buttery smell, and they looked creamy with flecks of black pepper.

The texture was mostly smooth, but there were some small lumps throughout.

I liked the overall flavor, which was strong on the black pepper and slightly buttery — I could taste the milk.

The package specifically listed that the product uses Yukon Gold potatoes, which are my favorite to use when I make homemade mashed potatoes. But when I opened the container to pierce the film, I thought they looked runny and watery.

I punctured the film, microwaved the potatoes for three minutes, removed the film and stirred, and cooked them for one more minute.

They were still really watery, so I had to stir extra to reincorporate the liquid.

I was disappointed with the flavor and texture of these mashed potatoes.

The Target-brand potatoes had no black flecks of pepper and looked pretty plain, but they had a good buttery smell.

Unfortunately, this smell didn’t translate to the flavor, because I thought these potatoes were pretty plain.

They’d taste better with a lot of butter and salt on top, but that wouldn’t fix the lumpy texture.

Like the Target version, this product’s label specified the type of potato used — in this case, Idaho potatoes.

The mashed potatoes came in frozen pucks, which can be heated in the microwave or over the stove. The stove was easier, so I added half the bag to a pot with 1/4 cup of water, as directed.

The bag said it would take nine to 11 minutes, but the frozen pucks took a while to break down in the pot. I let them cook over medium heat for about 15 to 20 minutes.

These potatoes had a weirdly sweet flavor and turned out lumpy.

While the potatoes were cooking, they looked pretty runny, and after they were done, they seemed pretty lumpy.

They also looked bright white with a few sparse flecks of black pepper.

When I took a bite, I confirmed the unfortunate final texture. I was surprised by how runny and lumpy they were, despite cooking for longer than instructed.

I also thought they smelled and tasted a little sweet, which was weird to me.

It was hard for me to choose a favorite.

Homemade mashed potatoes are still my go-to, but I’d be happy to buy the Bob Evans or Kroger versions next time I’m in a pinch.

I don’t think I’d buy either of the other two brands again — mainly because both were pretty lumpy and the flavors didn’t impress me much.

Of the four brands of premade potatoes, I preferred the texture of Bob Evans and the flavor of Kroger, so it was hard to choose a favorite.

If pressed, I’d probably go with the Bob Evans potatoes since they’d be easy to add more flavor to with butter and salt.

One thought on “I tried 4 brands of premade mashed potatoes from the store, and there are only 2 I’d buy again”