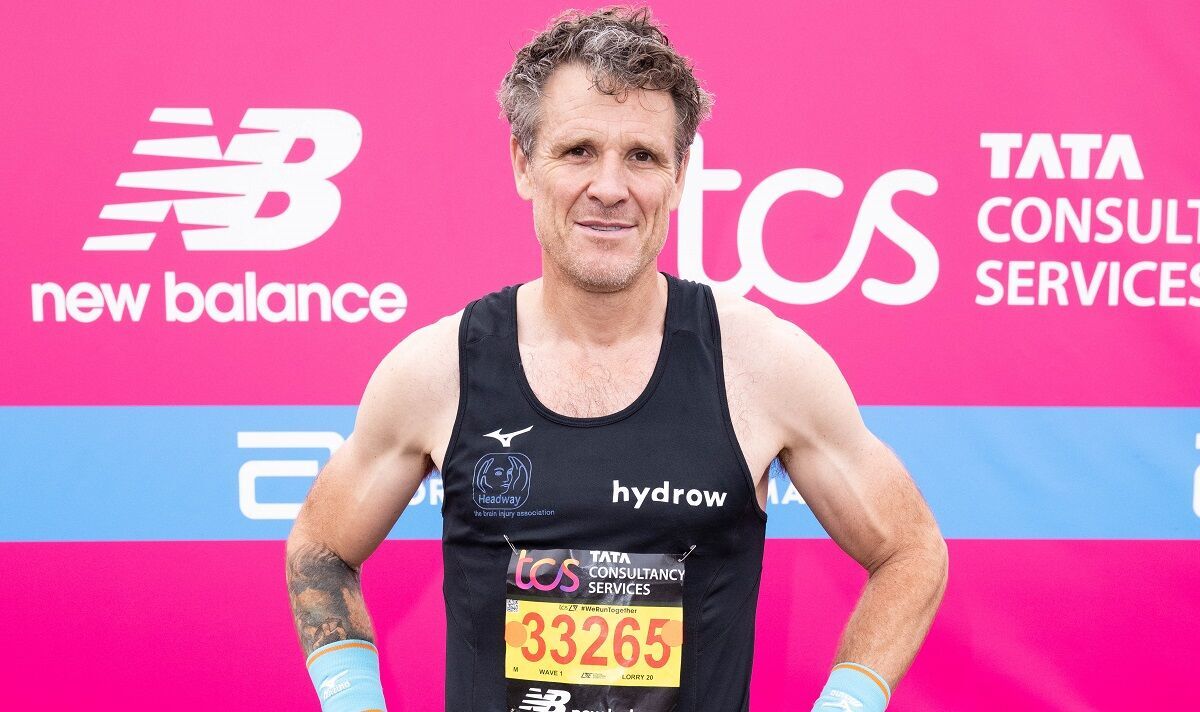 The double gold medallist rower is running the London Marathon today to raise money for Headway, a brain injury charity for which he serves as an ambassador. The rower was involved in an accident in 2010 as he filmed Cracknell’s Race Across America. His bike was hit by a petrol tanker and it was only his cycle helmet that saved his life.

But he was left in a coma and suffered damage to his frontal lobes. In 2019 he split from his wife of 17 years Beverley Turner.

TV presenter Bev later said the accident “nearly killed James and took away the man I knew,” adding: “Being with someone who survives a brain injury is to carry a little grief every day.”

James, 50, who won golds in the Coxless Fours in the 2000 and 2004 Olympic Games, said he was warned his relationship could be at risk by doctors who treated him.

“There were two points that the neuropsychologists made when I was being discharged.

“I was told 82 per cent of people with a brain injury get divorced.And I was also told that where you are after three years in your recovery is where you will be for the rest of your life. Those were really not helpful things to be told because it’s hard enough for you, your family and friends and your partner.

“That’s almost giving a cut-off to your partner and yourself that if there are still problems after three years, then your partner is going to think, ‘well that’s it – I’m stuck with this for the rest of my life’. I don’t think that’s healthy at all.

“This is where Headway is really useful as a charity. They help families in understanding the process and what’s happening.

“I don’t remember this, but when I was in hospital in America, I came out of the coma. They brought me a starter, main course and pudding. I was in bed and put the starter and dessert on the plate with the main course and put ketchup all over it.

“Bev asked ‘why is he doing that?’ and the nurse said ‘they all do’. I’d gone from a normal member of society to someone with a brain injury. I’d gone into my own little group.”

He pushed himself as he recovered, studying for a postgraduate degree at Cambridge, where he helped win the 2019 boat race, and accepted an offer to perform on Strictly Come Dancing that year too.

He was already going through his divorce from Beverley when he went on the show. He said he wanted to prove to the world he had moved on from the trauma of 2010. He said: “I went on to prove to myself and everyone else that, if I could get accepted into Cambridge, do the boat race having not raced or even rowed for 15 years, if I could do Strictly, then perhaps the question of ‘are you okay after the accident?’ would be irrelevant.”

He insisted he and Bev had worked hard to save their marriage.

He said: “We were married for 16 years. Bev found out she was pregnant with our third child when I was in a coma, so it was hard.

“Neither of us has walked away from anything, but a lot of marriages fail – with or without a brain injury.

James married American Jordan Connell last year after they had met at Cambridge. He said: “I am very lucky. She has a different perspective because she’s from Manhattan.”

He added: ” The reality is very few people go through life without any setback. It’s how you respond that defines you. I’ve never felt sorry for myself. People have bigger problems than I’ve had, but not every day is sunshine, put it that way.”

One thought on “I will not be defined by my brain injury, says Olympic hero James Cracknell”