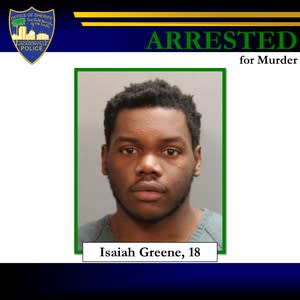 A man accused of killing an 18-year-old woman in Jacksonville is in jail after he was denied bond on Wednesday.

Action News Jax first reported Monday that the Jacksonville Sheriff’s Office was investigating the suspicious death of a woman in a Moncrief home.

Through their investigation, JSO homicide detectives eventually ruled that the death of the woman inside the home was a murder. Officials have said that the victim appeared to have suffered from some type of trauma.

The suspect was quickly identified as 18-year-old Isaiah Jamal Green.

According to JSO, “the suspect was interviewed by homicide detectives and was arrested for second-degree murder.” Green was booked into the pre-trial detention center.

When he appeared before Judge Kelly Eckley-Moulder on Wednesday morning, Green said, “How you doing, judge?”

Eckley-Moulder then denied bond for Green.

Green then asked, “Is it gonna be no bond forever?”

You can watch Green’s full exchange with Eckley-Moulder below:

One thought on “‘Is it gonna be no bond forever?’ Watch Jacksonville murder suspect’s exchange with judge in court”