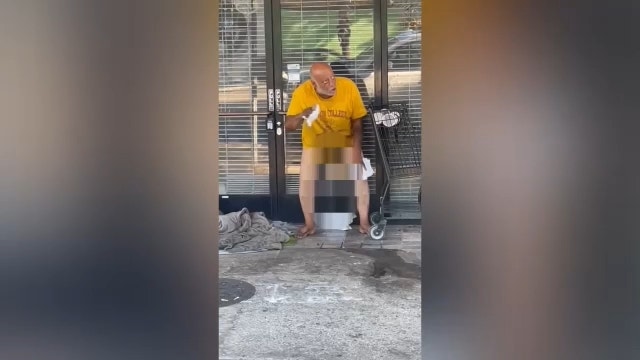 A Los Angeles homeless man known for openly defecating on Ventura Boulevard is seen on video obtained by FOX 11 hurling a bag of feces onto the hood of a business owner’s SUV.

“Every single day, every single morning, I’m wiping that off my property before I have to do business,” Paul Scrivano, owner of The Blue Dog Beer Tavern, told the news team at the scene.

The reporter asks the homeless man, “Sir, why are you throwing feces at people? You threw feces at this gentleman.”

The homeless man replies, “This guy gotta understand, I’m half paralyzed, I’m blind… I have no car for nine years…”

“Sir, do you need help? The city is offering help,” the reporter asks.

“You’re bothering me, I don’t need help, he needs help!” the man replies, referring to Scrivano.

“The solution is – that person who thinks he works for the FBI and who terrorizes my neighborhood, is given the choice as to whether he wants housing or not,” Scrivano said, motioning to another homeless man lying on the sidewalk. “It’s not a choice anymore. When people are suffering, you give them care. If they’re really suffering, you pull them into care or you lose them.”

“Homeless people will camp out in front of a store, make it there home, bring their possessions, use it as a bedroom, use it as a bathroom. In the morning, when the business owners try to open up, they have to deal with a homeless person literally blocking entrance to their business,” Larry Slade, an attorney and chair of the homelessness committee for the Sherman Oaks Homeowners’ Association, told FOX 11. “And then they have to deal with cleaning up hazardous waste. Right in front of their business. Right in Sherman Oaks. Right on Ventura Boulevard.”

“The rights of the homeless cannot exceed the rights of the homeowners and the business owners,” Slade said. “There has to be a balance between those two rights, and right now, that balance is tipping mightily in favor to the homeless to the detriment of the people that live here and work here. We’re not insensitive to these issues, but it’s gotten to the point where it’s beyond control and something’s gotta give.”

LA City Councilwoman Nithya Raman “does not care,” Scrivano told FOX 11, of the neighborhood’s city representative, saying that he was told to stop sending her “graphic material” of the homeless population making threats on the streets near his business.

“The reality is the people experiencing homelessness are still individuals there on the street because they don’t have a home,” Raman told FOX 11, admitting that mental health plays a role, but the crisis is mores fueled by a lack of housing. “This issue is a humanitarian crisis, and it’s a crisis for the entire city of Los Angeles.”