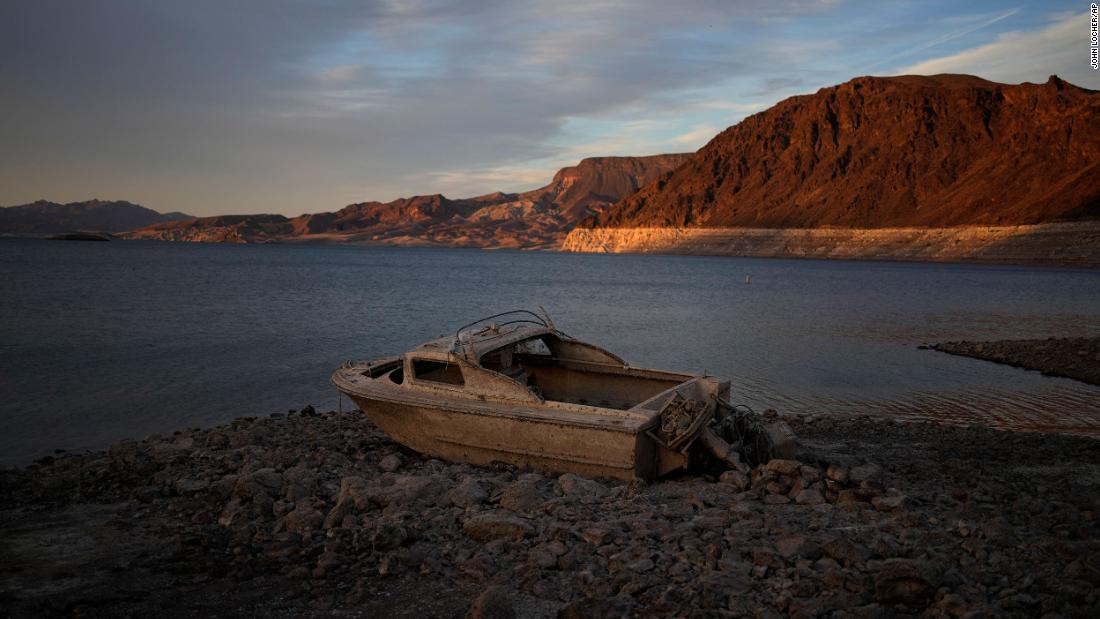 If the US Bureau of Reclamation determines in its August report that the lake level will be at or below that elevation in January 2023, the Southwest will move into the second tier of unprecedented water cuts that will further reduce the amount of Colorado River water that can be used by cities, industry and tribal water users.

As of Tuesday, Lake Mead’s level was around 1,049 feet above sea level.

As the water level drops, formerly sunken boats are emerging in the mud, and other vehicles are getting newly stuck.

Travis Pardee, who took several photos of the boats, told CNN he believes there are dozens in the area, but he only photographed a few of them.

And on Monday the National Park Service shared several photos on Twitter that showed trucks stuck in the mud around the lake — a shoreline that looks deceivingly stable, but acts more like quicksand.

“If you’re struggling to maneuver your car, boat or yourself along the beach, immediately head to higher ground if possible,” NPS said on Twitter. “No boat or car is worth a life.”

Lake Mead, which provides water to roughly 25 million people in Arizona, Nevada, California and Mexico, is currently operating in a Tier 1 shortage, which began in January. Under Tier 1 conditions, Southwest states saw mandatory cuts in the water they could consume from the Colorado River. Those cuts have primarily affected agriculture.

If the lake’s water level is expected to stay below 1,050 feet by January 2023, the more significant Tier 2 shortage would be implemented. Arizona would go from the current 18% cut to 21% and Nevada will go from 7% to 8%. Mexico will also see a 7% cut in its water.

Additional cuts — each tier with rising impact on agriculture and municipal water use — are expected if Lake Mead continues to fall. And if officials expect the level to be under 1,045 feet come January, then California too, would see a mandatory 5% cut from what they can pull from the Colorado River.

“This illustrates how truly bad the situation is,” John Fleck, director of the Water Resources Program at the University of New Mexico, told CNN. “The climate change risk we face on the Colorado River basin right now has never been greater.”

Patti Aaron, the Bureau of Reclamation’s public affairs officer, said the projections are nuanced, since water officials also have to account for the dwindling water levels at Mead’s upstream neighbor, Lake Powell, the country’s second-largest reservoir.

The agency recently announced unprecedented, emergency steps to help boost water levels at Lake Powell, which includes releasing more water from smaller upstream reservoirs on the Colorado River into Powell, while also holding back water in Lake Powell itself, instead of sending water downstream to Lake Mead.

Without those emergency steps, the bureau estimated there was about a 25% chance the Glen Canyon Dam, which is powered by Lake Powell, would have stopped producing by the end of this year. The dam generates power for as many as 5.8 million homes and businesses across seven states.

“Under the 2022 operational criteria, Glen Canyon Dam was supposed to release 7.48 million acre-feet of water to Lake Mead,” Aaron told CNN. “It was determined to lower that release to 7 million acre-feet to help protect Lake Powell from reaching critical levels.”

Given these recent unprecedented actions, “it is impossible to say what exactly will happen between now and August,” she said, which is when the Lake Mead report is issued.

Water authorities across the affected states as well as the federal government are already bracing for what’s to come.

“In preparation, we are continuing to work with the stakeholders, tribes, partners, and water districts to help them understand how much of a decline in their deliveries there might be,” Aaron said. “We also fund conservation actions and activities across the [Colorado River] Basin.”

As the climate rapidly changes and the drought persists, Fleck said the West should prepare for more shortages and take proactive actions.

“Whatever we do with moving water around from one reservoir to another reservoir, that’s just a bandaid, what we really need to do is dramatically reduce the use of water in the basin,” he said. “The heart of the problem is those reservoirs are empty because we’ve been using more water than the river can provide. We’ve got to turn that around.”