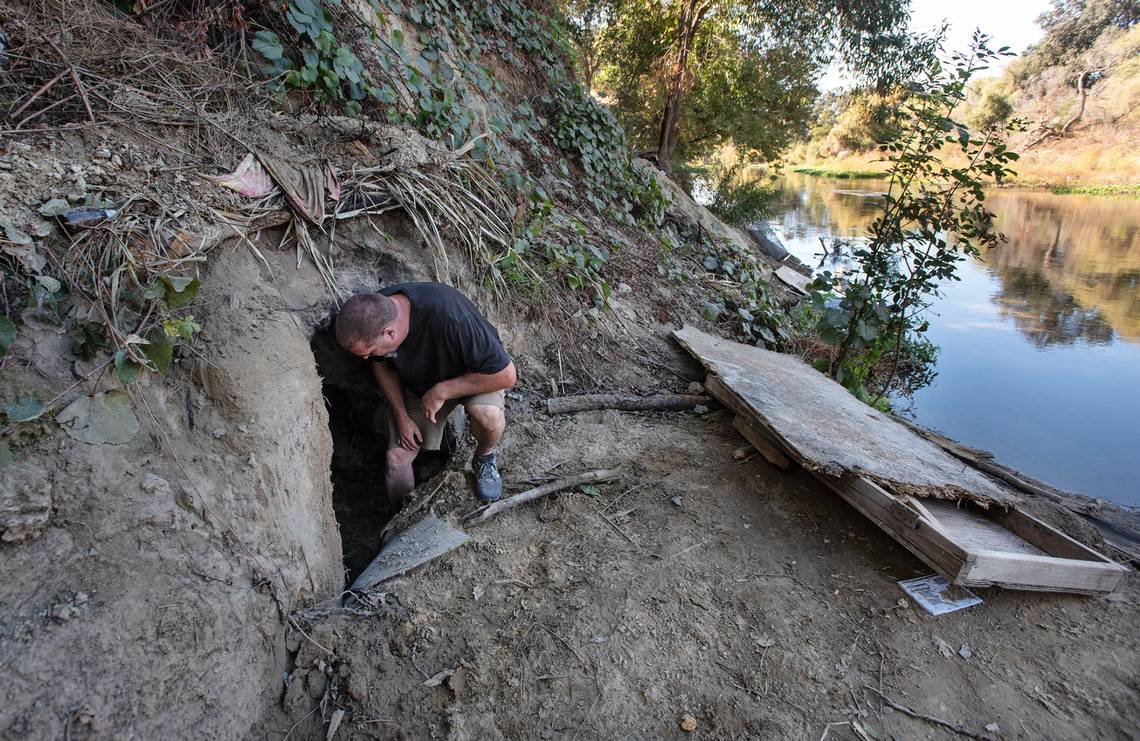 Removing trash from the banks of the Tuolumne River is an unending process for Chris Guptill, founder of the volunteer cleanup organization Operation 9-2-99.

“Once the trash goes down the river and ends up in the ocean, you are never going to undo that,” he said. “We are trying to prevent things that can’t be undone.”

He and other community leaders who work to address issues caused by homelessness recently found a new kind of problem along the river that also can have lasting consequences: caves dug into the hillside.

The caves, three of them, are on the south side of the river near Crater Avenue in west Modesto. Smaller entrances open up into larger areas with as much as 12 feet of space. They are tall enough to crouch in and long enough to lay in. One even has a shelf for storage.

Guptill said digging in general picked up over the past few years — digging to make pits, digging to create flat surfaces for camping and depressions cut into the hillside.

Some authorities The Bee spoke to said they have seen cave-like structures in the past but most said they had seen nothing as elaborate as the caves near Crater Avenue.

This particular riverbank, about a mile long, consists of a silt that is easy to dig and maintains its structural integrity. It’s different from the more sandy dirt in most other areas along the river, Guptill said.

He said the area is too steep to get heavy equipment there to fill them in and “without higher river flows, these places won’t be taken back by nature … It becomes a perpetual place for people to return.”

They also pose a safety risk to the people living in them and the first responders who might have to conduct a rescue or recovery in the event of collapse.

On Wednesday, less than a week later, Modesto firefighters were there extinguishing a rubbish fire inside one of the caves. The day after that, Guptill found a man sleeping inside the largest cave on the west side of the bank, adjacent to the one that was still wet with fire retardant. And between those two caves there were smaller holes that appear to be the beginnings of a fourth cave.

For about 10 years, Operation 9-2-99 has brought volunteers to the banks of the Tuolumne River every month to haul away hundreds of tons of trash created mostly by the homeless people who live there.

The group already has been at the Crater Avenue site twice this year, as recently as September when volunteers filled two 40-cubic-yard dumpsters and had to go back several times to finish pulling trash out of the cave farthest to the east.

On Thursday, the banks were again littered with bags of trash and rotten food. Plastic 5-gallon buckets and metal objects were submerged in the shallows of the river, and items were again accumulating in the east cave. There were large containers of spices, bags of chips and tortillas filled with dirt, a homemade bow and arrow and the probable digging implements, a pick ax and paint scraper. On top of the entrance to the cave sat an old ski and a stolen road sign.

Guptill is planning another cleanup there in a few weeks, along with the Modesto Police Department’s Alternative Response Unit. Sgt. Eric Schuller, who oversees the unit charged with addressing blight and quality of life issues, said the Abatement Team, Homeless Engagement and Response Team and a park ranger will respond to help with the cleanup and offer support and services to people living there.

Schuller said the teams will do everything they can to work with people to get them into shelters but those who refuse and repeatedly return to the site will eventually be cited or arrested. He said other solutions need to be worked out to prevent people returning to the caves, possibly fencing off the area for a period.

Asked how he stays motivated to keep coming back to the same encampments over and over, Guptill said, “I look at the other side of the river,” nodding to the north bank. It used to be just as bad as the south side but now has a seven-mile trail system that since 2018 has been regularly used by mountain bikers and runners who report blight and illegal camping as soon as it crops up.

The trails were cleaned up and expanded through various organizations like Operation 9-2-99 that now all operate under the nonprofit Modesto Outdoor Recreation Alliance. Darin Jesberg, a co-chair and Deputy Fire Chief of the Modesto Fire Department said the organization promotes family friendly outdoor recreation in the community.

He said an average of 20 to 30 people use the trail on weekdays and more than 100 people use it on weekends.

“The sheer presence makes the negative element uncomfortable,” he said.

That kind of ownership could have the same impact on the south side, Guptill said.

On Crater, Guptill thinks that can be achieved by the creation of a neighborhood watch group that works with police, a regular presence from park rangers, and management of the vegetation.

“We need to be able to take back what is ours and not have it be compromised all the time by people who don’t have any interest in what it looks like or care about it, when we have so many people who do,” he said.