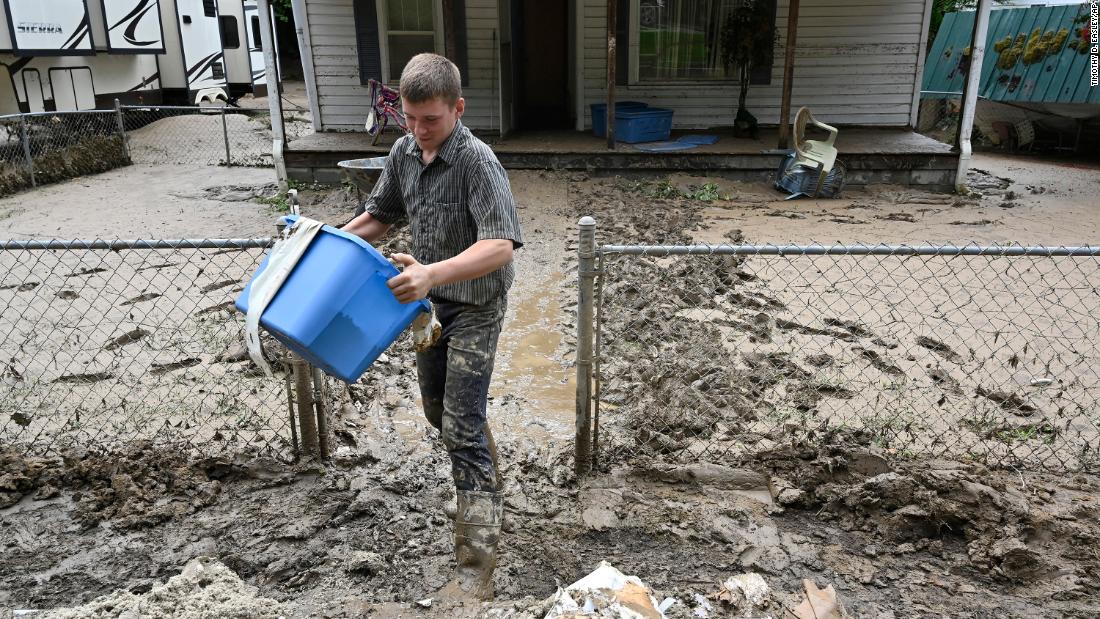 Over the past week, across the now-declared disaster area, survivors have shared harrowing stories with CNN of barely escaping the rushing waters, incredible rescue missions, and desperate attempts to save their families and themselves.

But they also have stories of barely surviving the cruel wake once the water receded — being stranded by washed out roads and bridges, struggling to get food, medicine or water in the early days, being rescued by neighbors.

More than a week after the flooding, Fleming-Neon Mayor Susan Polis still cries when recalling the devastation she saw in its aftermath.

“Well, I wasn’t prepared. But what can you do when your little town is, your little city is devastated? I mean, it was like a war zone,” she said.

City Hall is destroyed, leaving officials this week to work out of a camper and a tent over a table set up in a parking lot. The water lines on buildings lining Main Street reach well over 6 feet.

The water and debris broke windows all along the main part of downtown, in shops, the town dental office, churches — nothing was spared. Like many other communities in the region, there isn’t any clean, running water.

“Our vision is to build this back better than it was before, before the rain,” said Bormes. With a catch in his throat, he took a moment to collect his emotions before continuing. “Because these people deserve it. They deserve to have what they had before and more.”

Fleming-Neon was nearly impossible to reach in the first days after the flood, so help came from within the community. Polis recalled people being trapped in a holler until neighbors acted.

“They had a bridge to basically disintegrate. And for that night, for the rest of Thursday night and into Friday afternoon, there was no way in and no way out, for those people,” Polis said, “So, some citizens, before all this heavy equipment started coming in — the citizens, they fixed it.”

Quick thinking in a close call with death

Bolling, who people around town call Spanky, received a call that the fire station in nearby Jeremiah was flooding. He drove his pickup to the station, in part to move vehicles to avoid damage. In hindsight, he admitted the decision wasn’t good.

The water started to rise quickly as he pulled up to the station, trapping him inside his truck, which he said began floating with the current. His only option was to try to steer the truck into an old tanker he had left parked outside the station, he said.

Unable to open the truck’s door or window, “I reached and found my pistol in the back seat, and I shot the window out of my Chevy,” he said. Diving out the window, he made it to safety by climbing on top of the tanker, where he remained for 15 hours as flood waters, downed trees and debris rushed past him.

“I had a lot of time to think about a lot of things,” Bolling said. “I found peace. I wasn’t scared. I had a long talk with the Lord.”

While stranded, Bolling texted his mother and father: “I love you, please don’t worry… everything is fine… I love you.”

The Letcher Fire Department was destroyed, with all vehicles damaged. Insurance won’t be enough to cover all the damages, according to Bolling.

While Bolling plans to get the station straightened out, he also has to address his own trauma, he said. He hasn’t been able to sleep and often hears water when he closes his eyes.

“I’m having a lot of trouble. I’m not going to lie,” he said. He plans to talk to a therapist and hopes others who survived the storm can do the same.

“PTSD is real, and I kind of wondered about things, like how to go forward, but you know, I gotta fix myself first,” he said.

But along with the sorrow, there’s pride, too, in the way their Appalachian community has come together, with neighbors who lost everything helping neighbors in the same situation.

Volunteers from all over Appalachia have been sweeping and using small bulldozers to get mud out of buildings this week.

And while proud of their independent and resilient community, officials in Fleming-Neon admit the city is desperate for all the help it can get.

“Our infrastructure needs help from Washington, from Frankfort. We’re going to have to have a lot of help,” Fire Chief Bolling said.

Gary Clink, who has lived just outside of Hindman for decades, was rescued, along with his wife and a neighbor, by his son-in-law, he said. Now he’s trying to save his wet furniture from mildew in the muddy interior of his home, which had more than 4 feet of water in it during the flood.

“It’s like someone turned the switch to maximum overdrive,” explained Clink as he sat on the porch looking at what was left of his belongings drying out on the lawn, “I’ve never seen water like that. It’s like a dam burst or a tsunami.

“That’s the reason you see garbage wherever you look, houses wrecked. I’ve seen three homes I knew basically lifted up off the foundation base, as they washed down the stream and it ripped them apart.”

And he worries that this catastrophe won’t be the last.

Some are also concerned that people will leave the area because the devastation is too extreme.

“This is literally the end of this little community,” Clink sighed, “These people, you’ll see a lot of them had decent appliances, decent furniture, decent clothes, but it is no longer decent.

“If they didn’t have flood insurance or FEMA can’t step in and actually help… this is the end of the line for this community. I don’t see any way they are going to come back from it.”

“It’s country back here. It’s slow. I mean, we love it. We stay back here,” Bolling said. “But at the same time, it’s never going to be the same. There will be a lot of people leave here. I know that. They have nothing to come back to. But we’ll make it. We’re strong.”