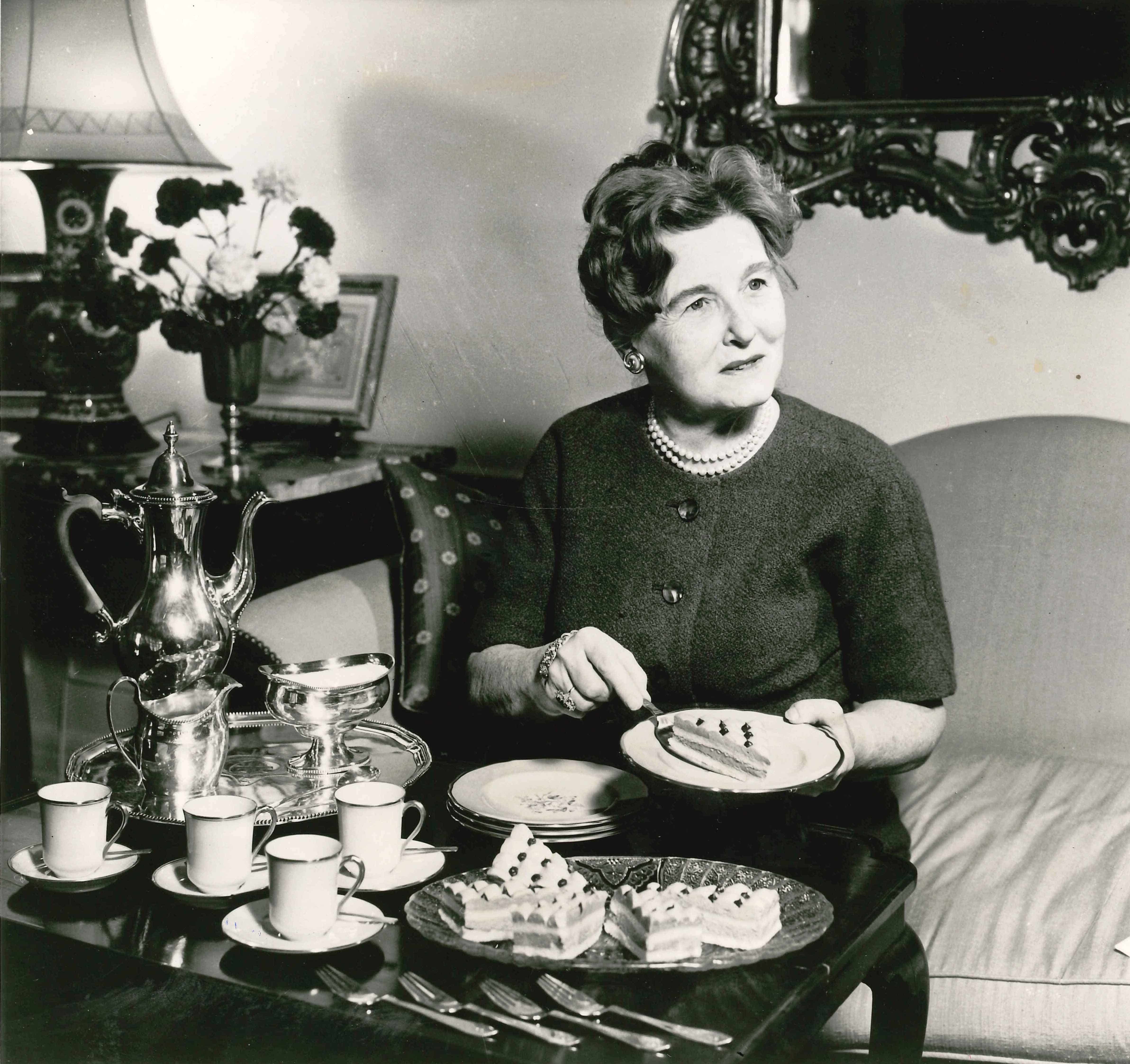 Margaret Rudkin was a force of nature on the farm, in the bakery and in the boardroom.

You may not know her name. But you’ve certainly enjoyed delicious breads and snacks inspired by her idyllic Connecticut estate.

Yes, it’s a real place. The Pepperidge Farm brand today is a powerhouse of the American food industry. It produces many of the nation’s most beloved products, from breads and layer cakes to Milano cookies and Goldfish crackers — the latter of which Americans consume by the billions every year.

MEET THE AMERICAN WHO INVENTED THE MOTOR HOME

Pretty remarkable for a city girl who, when she started cooking at her farmstead, couldn’t even bake bread.

“My first loaf should have been sent to the Smithsonian Institution as a sample of Stone Age bread, for it was hard as a rock and about one-inch-high,” Rudkin wrote about her miserable first efforts to bake.

Margaret (Fogarty) Rudkin and her husband, Henry, purchased a 125-acre farm in Connecticut in 1926, which they named for a group of pepperidge trees that grew on the property. An inexperienced baker, she created homemade breads as well as an iconic American food company.
(The Campbell Soup Co.)

She soon got the hang of it.

Rudkin and Pepperidge Farm battled through the Great Depression and World War II and emerged as a dynamo of the American food industry. Her company was baking up to 50,000 loaves of bread each week at her giant Norwalk, Conn., kitchen by the end of the 1940s.

She became an early national TV star as Pepperidge Farm pitchwoman in the 1950s. Then, in the 1960s, she hit The New York Times best-seller list with her autobiographical cookbook, while selling her Pepperidge Farm brand for a cool $28 million to Campbell Soup Co. — where she became the first woman on its board of directors. The deal was worth about $237 million in today’s dollars.

“One of our whimsical ideas was to live a real country life.”

Her remarkable story began amid humble origins: She was a mom struggling to teach herself to bake whole-wheat bread to nourish a sickly son.

Margaret (Fogarty) Rudkin (1897-1967) was born in Midtown Manhattan, in an east side neighborhood called Tudor City. It’s best known today as the home of the United Nations, with its imposing main building lording over the East River.

MEET THE AMERICAN WHO INVENTED THE DONUT

Tudor City was at the turn of the 20th century a neighborhood of dignified four-floor brownstones and cobblestone streets. There, Rudkin lived with her parents and Irish grandmother and later wrote fondly about her earliest food memories.

“The wide stone steps were used by children for playing games, and on hot summer evenings we were allowed to sit there until dark, cooling off by eating enormous ice cream cones, which costs five cents,” she waxed in “The Margaret Rudkin Pepperidge Farm Cookbook,” published in 1963.

“If we didn’t have a nickel, we sucked a piece of ice dipped in sugar.”

The book is largely an idealized autobiography, fleshed out with hundreds of country-style recipes. It was reportedly the first cookbook to hit The New York Times best-seller list.

“I seldom eat candy. But about twice a year I go on a coconut binge.”

“The fruit carts, gay with bright paint and flags and banners, and ringing bells or blowing whistles, came to the houses, and we knew the Rhubarb Man would come in the spring, the Strawberry Man in June and the Grape Man in September … Another itinerant friend was the Coconut Man, who had pieces of fresh coconut for sale — hard on the teeth of a young one, but deliciously sweet and chewy.”

Rudkin’s family moved to Flushing, Queens, when she was about 13; she graduated as valedictorian of her high school class. She proved adept at mathematics and finance — skills that would later serve her quite well.

Academic success led her to a job on Wall Street, where she met and married an executive named Henry Albert Rudkin.

They apparently enjoyed financial comfort. In 1926, the young couple purchased a 125-acre farm in Fairfield., Conn., about 60 miles northeast of New York City.

“One of our whimsical ideas was to live a real country life,” she wrote. “One of the attractions of the place was a group of beautiful trees with unusually gorgeous coloring in autumn. When we discovered they were a variety of the sourgum species and were known as pepperidge trees, we called the place Pepperidge Farm.”

Not was all idyllic on the little farm, however.

The Rudkins’ youngest son, Mark, suffered from severe allergies. So in 1937 his parents were advised to feed him a diet featuring fresh, stone-ground whole wheat — which had been disappearing from the American diet in favor of more highly processed white breads.

“For Rudkin, it seemed, food was more than nutrition but an expression and affirmation of love, affection and appreciation,” author Edith Sparks wrote in her 2017 book, “Boss Lady: How Three Women Entrepreneurs Built Successful Big Businesses in the Mid-Twentieth Century.”

“I had never made a loaf of bread in my life,” Rudkin wrote.

But after trial and error, she developed delicious bread flavored with a “generous” amount of butter, milk, honey and molasses.

She brought bread to her doctor, who loved it so much he recommended it to other physicians for their patients. Word spread — and before long, she had a mail-order business selling Pepperidge Farm bread to families far and wide.

Rudkin soon took the bold step of making a sales pitch in New York City herself at “the famous old food specialty shop” Charles and Company across from Grand Central Terminal.

“I was petrified with fright,” she wrote.

Pepperidge Farm launched as a commercial business in 1937 after Margaret Rudkin’s Conn. neighbors fell in love with her homemade breads. By the end of the 1940s, Pepperidge Farm was baking 50,000 loaves of bread per week.
(The Campbell Soup Co.)

The shop manager loved the bread, comparing it to the kind his own mother baked. He ordered 24 loaves, which Rudkin baked overnight and sent to Manhattan with her husband the next day, and then subsequent days, as he commuted into the city for work.

The bread baked on Pepperidge Farm soon captured the attention of the Manhattan food literati.

MEET THE AMERICAN WHO INVENTED THE ‘CLEAN, WHOLESOME’ CORN DOG

“Things really changed once her bread made into the December 1939 issue of Reader’s Digest,” said archivist Scott Hearn with Campbell Soup.

“This article sparked orders from all over the country … Pepperidge Farm quickly outgrew its space on her actual farm, which brought about the rental of a building in Norwalk. Pepperidge Farm continued to grow and expand throughout the 1940s and 1950s adding a variety of new products.”

She sold Pepperidge Farm to Campbell Soup Co. in 1961. Rudkin continued to run the company she founded while securing a seat as the first woman on the Campbell board of directors.

“It has proven to be one of the most strategic acquisitions our company has ever made,” the Campbell company enthused in 2011, while celebrating the 50th anniversary of the deal. Pepperidge Farm sold $22 million worth of product in 1961. Fifty years later, that total ballooned nearly 60-fold to $1.3 billion.

The success of the business afforded the Rudkins the opportunity to travel in Europe, where Margaret scouted out ideas for new food products.

She discovered cookies from Milan, for example, and an odd little treat she found in Switzerland in 1958. They were tiny crackers shaped like goldfish.

Margaret Rudkin discovered tiny crackers shaped like goldfish amid a tour of Switzerland in the 1950s; she introduced the snacks to the U.S. in 1962.
(Campbell Soup Co.)

Pepperidge Farm introduced Goldfish snacks to the United States in 1962. The tiny treats packed with big flavor have been a huge hit.

Pepperidge Farm sells about 188 billion individual Goldfish crackers in North America each year, the company reports — more than 500 Goldfish for every man, woman and child in the U.S. and Canada. The irresistible little snack is found in more than 1 in 3 American households.

MEET THE AMERICAN WHO INVENTED THE MOTOR HOME

The latest limited edition Goldfish flavor, spiced with Old Bay, was introduced in May.

From Pepperidge Farm to Paris

Rudkin died at Yale-New Haven Hospital on June 1, 1967, after suffering from breast cancer. She was 69 years old. Her husband had passed away a year earlier.

She had grown into a titan of American industry — all of it after teaching herself at age 40 to bake bread for her three children.

Pepperidge Farm introduced its first Goldfish crackers in 1962, based on a delicious discovery that Margaret Rudkin made in Switzerland. The company today produces about 188 billion little Goldfish crackers each year.
(The Campbell Soup Co.)

An obituary issued by Pepperidge Farm listed her impressive achievements. The company at the time of Rudkin’s death boasted “five modern plants” around the country. It employed 2,300 people.

She was a frequent speaker to academics and industrialists in both the U.S. and Europe, recognized by groups around the nation for her achievements in business, especially as one of the nation’s most successful female entrepreneurs.

She was survived by her three sons, Henry, William and Mark.

The youngest, Mark, was the sickly boy who inspired his mom to bake whole-wheat bread. He also went on to a life of acclaim — as a gardener in Paris.

The French government in 1992 selected Rudkin to restore the gardens at the 17th-century Palais-Royal, where Louis XIV, among many other members of French aristocracy, once lived.

Rudkin had no formal training as a horticulturalist. But he turned for inspiration to the Connecticut farm where he grew up, the one famed for the colorful autumnal foliage of its pepperidge trees.

“We were all very plant-conscious,” Mark Rudkin told Garden Design magazine. “My father had a vast knowledge of trees and shrubs, and my mother did the flower garden — so I was just brought up in that element.”