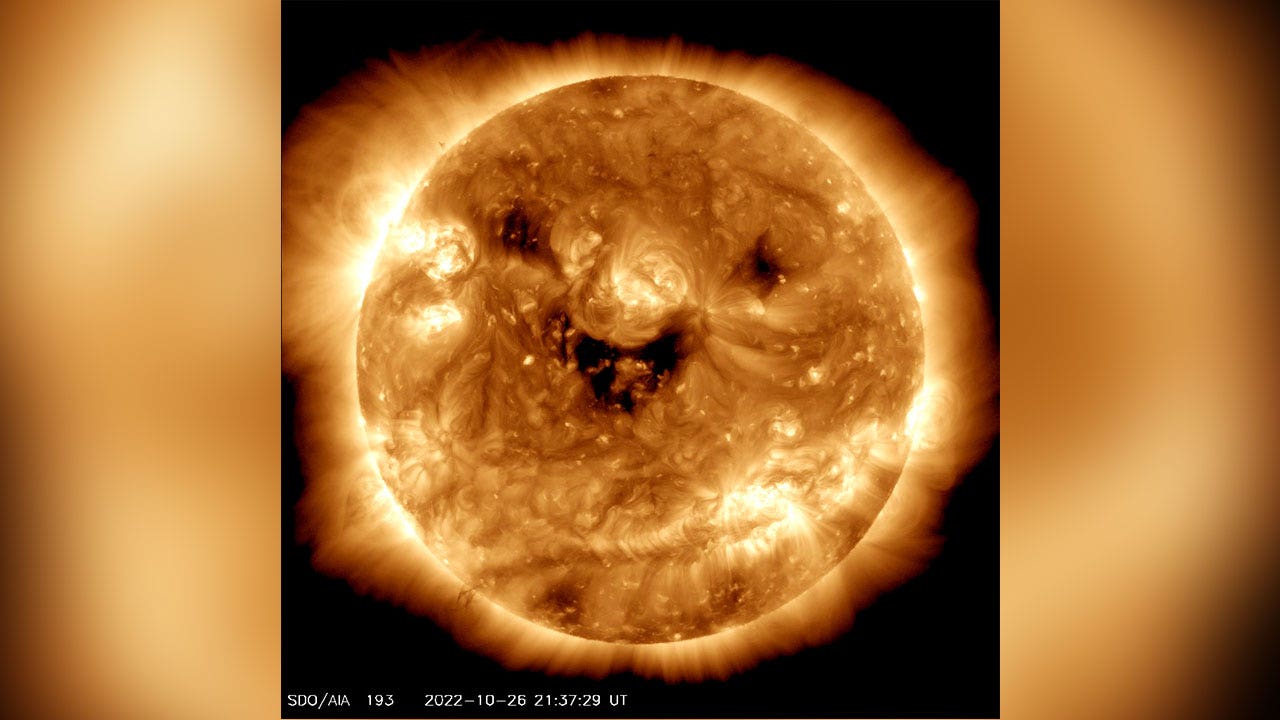 NASA shared a video taken by its Solar Dynamic Observatory showing dark patches on the sun, giving the illusion of a smile. (Credit: @NASASun / Twitter)

Despite its seemingly “sunny” appearance, an image of the grinning sun isn’t as cheery as it looks.

NASA’s Solar Dynamics Observatory previously caught an image of the sun in ultraviolet light with three dark spots on its surface on Oct. 26, giving the illusion the sun was smiling. The smiling sun followed a partial solar eclipse Tuesday, though the two events were unrelated.

What many viewed as a giant pumpkin in the sky, though, consequently prompted a minor geomagnetic storm watch on Saturday.

The dark patches, formally called coronal holes, are areas through which fast solar wind gushes out into space. NOAA’s Space Weather Prediction Center issued an alert on Saturday, stating the coronal holes were “anticipated to enhance and disturb the solar wind environment and lead to unsettled conditions.”

NASA’s Solar Dynamics Observatory previously caught an image of the sun in ultraviolet light with three dark spots on its surface on Oct. 26, giving the illusion the sun was smiling.
(Credit: @NASASun/Twitter)

Conditions were expected to go on until Wednesday. However, no “significant transient or recurrent solar wind features” are expected along with geomagnetic storms.

MONSTROUS ASTEROID TO SPEED BY EARTH NEXT WEEK

The coronal holes appear dark on the surface because they’re cooler and less dense than the regions surrounding them. They can develop at any moment and anywhere on the sun, with the capability to disrupt power and other Earth-based systems, including spacecraft operations. Coronal holes are ranked from G1 to G5, with G1 being the least powerful.

Workers on scaffolding repaint the NASA logo near the top of the Vehicle Assembly Building at the Kennedy Space Center in Cape Canaveral, Florida, May 20, 2020.
(AP Photo/John Raoux, File)

NASA posted on social media that three solar flares were detected in the past week as of Oct. 30, along with 23 coronal mass ejections. The three-minute video shared from NASA’s Solar Dynamic Observatory gave viewers a look at the smiling sun.

Haley Chi-Sing is a Fox News Digital production assistant. You can reach her at @haleychising on Twitter.