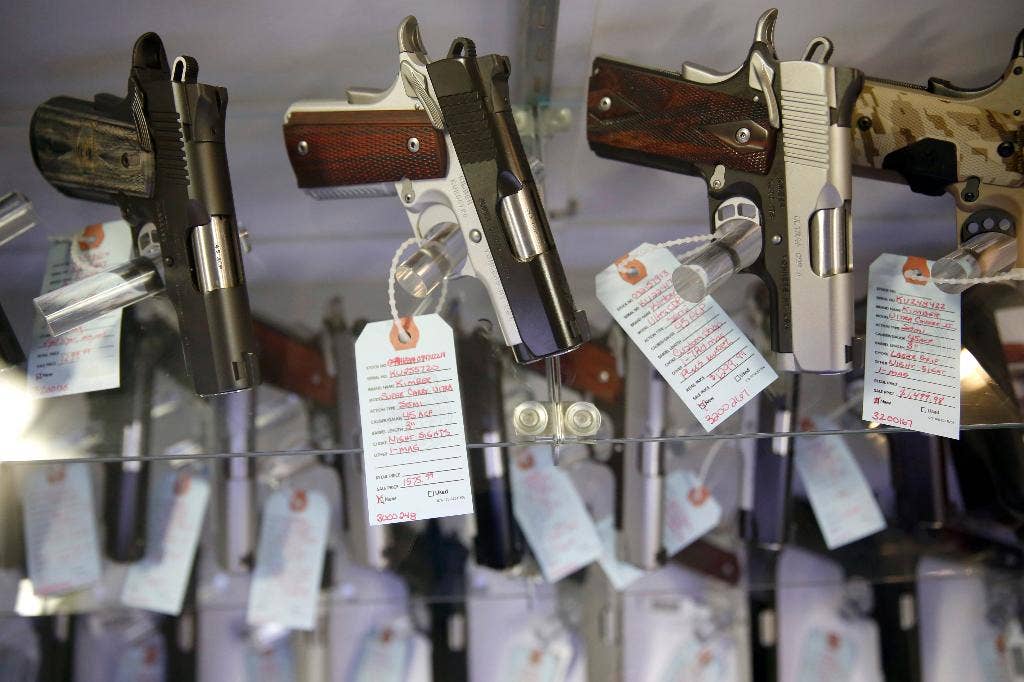 A Yadkinville, North Carolina gun shop was broken into overnight and the suspects made off with several handguns.

Now, the owner of the shop, Jeff Whitaker, is offering a $5,000 award for the arrest of the individuals involved in the heist.

FILE – This Nov. 15, 2014 file photo, shows handguns in a display case at Metro Shooting Supplies, in Bridgeton, Mo. Gun sales have spiked in the region in the past year, and so have applications for concealed-carry permits.  Policing experts say that with more guns come more gun thefts. (AP Photo/Jeff Roberson, File)
(The Associated Press)

Foothills Firearms and Ammo, which is located roughly halfway between Winston-Salem and Wilkesboro, North Carolina is the fourth gun shop in the region to be burglarized within the past six months.

On Monday morning, suspects used a vehicle to ram the front door of the gun shop and shattered the glass.

Two suspects – one of whom was wearing a white hoodie and the other wearing a black hoodie – then entered the store and attempted to shatter newly installed tempered glass before ultimately chipping and prying the glass and grabbing 10 handguns with a total value of about $6,000.

Store Manager Ron Hudson described the ordeal on Monday afternoon, saying the two individuals tried to bust the glass with their hands, first. After that, they grabbed a shotgun off a back rack and repeatedly tried to smash the top of the glass.

Ironically, Hudson said, the cases did not have backs and the suspects could have raked the handguns into a bag and gotten away.

Instead, they damaged the cases and the front door, causing roughly $4,000 worth of damage.

Still, the routine was similar to what happened in gun shops located in Elkin, Mocksville, and Rabbit Ridge.

“They break in, break the glass…grab handguns and get out,” Hudson said. “They [did] it at our shop in 35 seconds. It’s a smash and grab.”

He added that the Yadkinville Police Department and Bureau of Alcohol, Tobacco, Firearms and Explosives are investigating the incident.

According to Hudson, the suspects only took handguns and left the ammunition and rifles.

As this trend continues to build momentum, though, Hudson says the owner of the shop has plans to bolster up the store.

“We are going to extremely reinforce our building and put up higher end cameras,” he said.