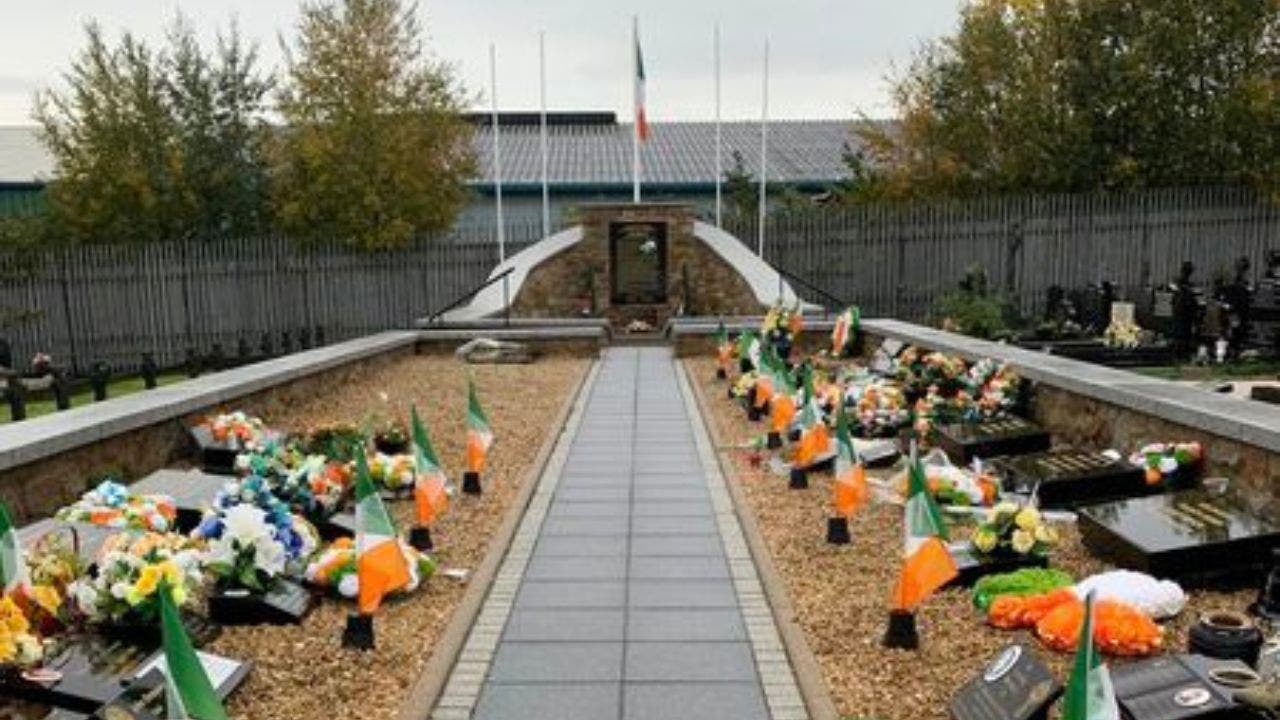 The single, white rose is sheathed in plastic. The flower is affixed to a stucco wall next to an automated cash machine on Shankill Road in Belfast, Northern Ireland.

It just so happened that I visited this spot 29 years to the day after two Provisional Irish Republican Army members walked into Frizzell’s with a bomb. It was just after 1 pm on October 23, 1993. The bombers looked customers in the eye, placed a bomb on the counter and blew the place sky-high.

Nine people died in the attack in the mostly Protestant neighborhood.

When I walked on Shankill Road the other day, someone has lashed a bouquet of young, pink flowers to a nearby light post.

A small, white card is taped to the flowers. The writing is in block letters and blue, ballpoint pen.

Head a few miles away you’ll find Falls Road. It was one of the most violent locations in all of Belfast during “The Troubles,” the sectarian fight which ran for decades until the Good Friday Accord in the late 1990s. Off of Falls Road, the locals have even renamed Beechmount Avenue “RPG Avenue.”

Milltown Cemetery is in West Belfast. Some of IRA’s most controversial figures are buried there. “Terrorists” is how Unionists would characterize them.

At Milltown Cemetery, you’ll find the grave of Bobby Sands. Sands is one of the most notorious figures of the Provisional IRA. Sands was serving time for helping plan the bombing of a furniture company in Belfast in 1971. Sands was a Member of the British Parliament who died in jail after a 66-day hunger strike in 1981.

One of the most unsettling episodes of The Troubles unfolded in the cemetery right by Sands’ grave. It epitomizes the stridency and violence of the conflict.

During the height of The Troubles, the lesson from Milltown Cemetery is that even those who go to mourn the dead could end up dead themselves.

Those tied to the IRA and its political wing Sinn Fein came to Milltown for a funeral on March 16, 1988. The funeral was for three Provisional IRA members who were killed by British Special Air Service in Gibraltar on March 3, 1988. Gibraltar is a British territory.

The IRA allegedly planned to bomb British soldiers in Gibraltar. Republicans claimed their men were unarmed and the British fired on them without provocation.

When their families tried to lay to rest the men killed in Gibraltar by the British forces at Milltown, Ulster Defence Association member Michael Stone snuck up a hillside. As he approached the funeral party, Stone lobbed hand grenades toward the crowd and began shooting with a pistol.

Back and forth the violence went during The Troubles. Tit-for-tat. It’s complicated and hard to keep up.

There was Bloody Sunday in Derry in 1972 when British forces opened fire into a Republican march in the town’s Bogside neighborhood, populated by Catholics. U2 documented the massacre in its song “Sunday Bloody Sunday.” Black Sabbath was more than a decade ahead of U2 with “Sabbath Bloody Sabbath,” noted for one of the angriest, foreboding riffs in the history of rock. The Kenneth Branagh movie “Belfast” just hit the screens.

The Catholics call the town Derry – as does the sitcom “Derry Girls.” However, Unionists might prefer Londonderry. Years of attacks and conflict add up in places like Omagh, Loughinisland, Greysteel and Enniskillen. There was the bombing in Brighton, England in 1984 during a visit by British Prime Minister Margaret Thatcher.

When I worked at another news organization decades ago, an editor famously put out a memo that we should never refer to various killings between the Israelis and Palestinians as “retaliation” in copy. The reason, the editor said, was that it was all retaliation. The same could be said in Northern Ireland.

Fortunately, the Good Friday Accord doused many of the flames from the conflict. There hasn’t been a major killing or bombing in years. However, a power-sharing arrangement to govern Northern Ireland between the sides is stalled. The Good Friday Accord wasn’t built for Brexit. Northern Ireland now has no functioning government in its “devolved” parliament. A weak British pound, a weak Euro, staggering inflation and heating costs, a push for Scottish independence from the rest of the United Kingdom and political instability at Westminster with the U.K. burning through Prime Ministers – don’t help matters in Northern Ireland.

Covering the violence of The Troubles constituted part of the main beat for journalists from England, Ireland and Northern Ireland between the late 1960s through the early 2000s. It came with the territory. The bombings. The clashes with the Royal Ulster Constabulary. It was just part of the job.

This sounds familiar to a journalist who has covered the U.S. Congress for years now. Granted, some of the violence hasn’t been as gruesome as The Troubles. But the incidents have been just as shocking. And, like the back-and-forth in Northern Ireland, it’s a challenge to keep track.

There was the mass shooting in 2011 which nearly killed former Rep. Gabrielle Giffords, D-Ariz., wife of Sen. Mark Kelly, D-Ariz. The assassination attempt forced Giffords to resign from Congress. In fact, Giffords’ aide who later took her seat, former Rep. Ron Barber, D-Ariz., was also shot during the attack. There was the baseball practice shooting in 2017 which nearly killed House Minority Whip Steve Scalise, R-La. There was the riot at the Capitol during the certification of the Electoral College. In just the past few months, Rep. Marjorie Taylor Greene, R-Ga., has been the victim of multiple “swatting” attempts. That’s where someone phones in a false alert about someone’s house. The hope is that the SWAT team will barge in and unwittingly shoot the target. A man attacked Rep. Lee Zeldin, R-N.Y., with a knife as he campaigned for governor. Serious threats to injure or kill lawmakers from both parties have spiked to frightening levels. The savage, brazen attack on Paul Pelosi, husband of House Speaker Nancy Pelosi, D-Calif., now commands headlines.

The incidents add up. The fear increases.

Those of us who have covered Congress for a while have something in common with our journalist colleagues who reported on The Troubles. We can quote specifics about how Republicans on the Congressional team dove for cover in the first base dugout during the baseball practice shooting in the same way and an Irish journalist might talk specifics about the fish shop massacre. Those of us who cover Capitol Hill can tell stories about marauders stalking Speaker Pelosi during the Capitol siege just like those in Northern Ireland can rattle off details about the mayhem at Milltown.

It’s all political violence. And the U.S. has endured it for a while now.

Democracies only function when there is mutual respect from both sides. Trust is paramount. The violence from The Troubles didn’t solve the political disputes in Northern Ireland.

The same with the spate of political violence and unrest which now grips the United States.

There is at least a tenuous peace now in Northern Ireland – bereft of violence – despite the uneasy politics.

Voters cast ballots for federal office next week for the first time since the Capitol riot. The Department of Homeland Security warns of a “heightened alert” driven by “domestic violent extremism” as the election approaches.

Chad Pergram currently serves as a senior congressional correspondent for FOX News Channel (FNC). He joined the network in September 2007 and is based out of Washington, D.C.

One thought on “Northern Ireland’s ‘Troubles’ may have quieted, but their echo has reached America”