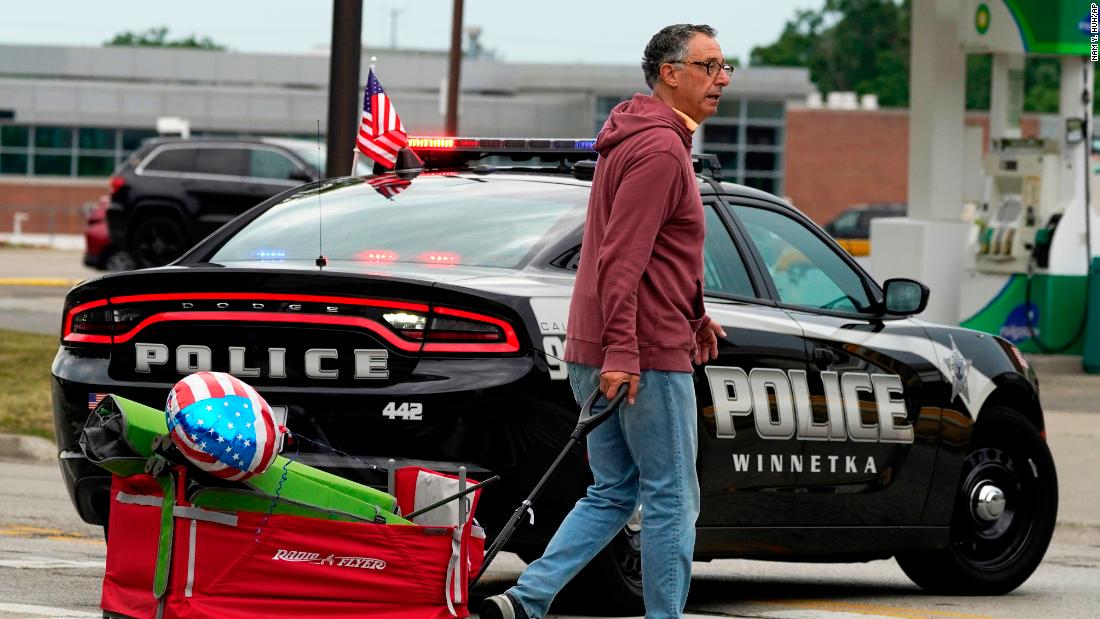 Every shooting — not just the ones that make national news — should have us reevaluating our wildly lax gun laws, but one happening at a public celebration of America itself should have Americans asking: Is this what we want our country to be?

For the minority of gun radicals who have a stranglehold on the Republican Party and American politics more broadly, the answer is yes: They are hurtling us deeper into a paranoid, dangerous, atomized culture in which individuals are armed as heavily as they want to be, public spaces are potentially deadly and every person is reliant on only themselves or the mythical “good guy with a gun” to protect them from everyone else with a gun. This minority, unfortunately, has deep pockets and vast political power.

For most Americans, though, this is no way to live.

Last month, after yet another mass shooting left 19 schoolchildren and two teachers dead in Texas — the second mass shooting of elementary schoolers and their teachers in a decade — public support for gun control hit a decade-long high, with nearly 6 in 10 Americans saying that it is more important to control gun violence than to protect gun rights.

Majorities support common-sense legislation like red flag laws (which allow the police, family members or a doctor to petition to remove a gun from an individual’s home), a ban on assault-style weapons and stricter background checks.

But the Republican Party has largely refused to budge even on the most sensible and modest gun legislation. While the most significant gun bill in nearly 30 years just passed through Congress and now goes to President Joe Biden to sign, it took a second mass slaughter of children to see any political movement. And what did pass is quite limited: Expanded criminal background checks (but only for some gun buyers, particularly those under the age of 21); limits on whether a larger but still incomplete group of domestic abusers can have guns; and more money to a fund that helps law enforcement identify and seize the guns of troubled and potentially dangerous people.

Other aspects of the legislation, though, avoid the root of problem: Guns. Instead, the measure directs millions of dollars toward mental health services (which is good and necessary, guns or not) and school security (which would be far less necessary without all the guns).

And while every Democrat in the Senate voted for the bill, only 15 Republican senators did. More than two-thirds of them — 33 Republican senators — voted against. In the House, it was even worse: While all 220 House Democrats voted for the bill, just 14 Republican representatives did; 119 Republican Congresspeople voted against it.
That Republican intransigence has real costs. The same weekend as the Highland Park mass shooting, a gunman opened fire in a mall in Copenhagen, Denmark, killing three people. While some gun extremists used that as an example of why strict gun laws don’t work, it actually proves the opposite: The Copenhagen shooting was a shocking anomaly in a country with strict gun laws that hasn’t seen a mass shooting since 2015 — and that was a terror attack.
In Denmark, shootings like these are so rare that they shake the nation. In the US, they are run-of-the-mill events — while Denmark hasn’t seen a similar mass shooting in seven years, the US has seen an average of more than 11 mass shootings every week this year alone.

Obviously, America’s out-of-control gun culture costs lives. But it also costs us connection, community and the basic ability to feel safe gathering in public. In the last two months alone, innocent Americans have been gunned down in the supermarket, at school and now at a Fourth of July parade. Nowhere, it seems, is safe. And if people don’t feel secure gathering in public — if they worry, reasonably, that public gatherings and even mundane tasks may put their lives at risk — they are going to stay inside. That makes for a culture of isolation and dysfunction.

Human beings are social creatures. When we are isolated, we wither. And we don’t just need connections to our immediate families; we need to be connected to broader communities of people in order to thrive. Children who grow up in neighborhoods with deep interconnections do better physically and emotionally; adults in connected communities are healthier and feel a stronger sense of trust and security than those who live less-connected lives.

Events like school plays, weekend markets, music performances and Independence Day parades knit us together around shared experiences and shared values. They create a sense of mutual investment in a place and in the other people who make up that place. They’re not just random fun; they are the glue that holds a place and a people together.

And when we lose our sense of safety at them, we lose much more than just a parade.

The battle over guns is a battle over what kind of place America is going to be. Those who, like, me want to see common-sense gun control — strict background checks, a ban on military-style weaponry, regulations on where you can carry guns and who can buy them — want an America where our lives are not controlled by, and too often ended by, gun violence.

Those who want a free-for-all on deadly weaponry wind up creating the opposite: An America in which more people are, like gun owners themselves, more likely to be fearful, reactionary, insecure and paranoid — and as a result less socially connected, open-minded, and reasonable. This is an America of fear and isolation.
There is only one question here: Do we want our country to be a place where deadly gun violence permeates every public space, from our supermarkets and roads to our offices and churches to our schools and streets? Funerals, graduation parties, nightclubs, restaurants, bars, barbecues, hospitals, a walk down the street with your baby in a stroller, even the inside of your own home — nowhere are Americans safe from guns.
We don’t have to live like this. We are an extreme international outlier when it comes to guns. And we could radically decrease gun deaths if we wanted to.