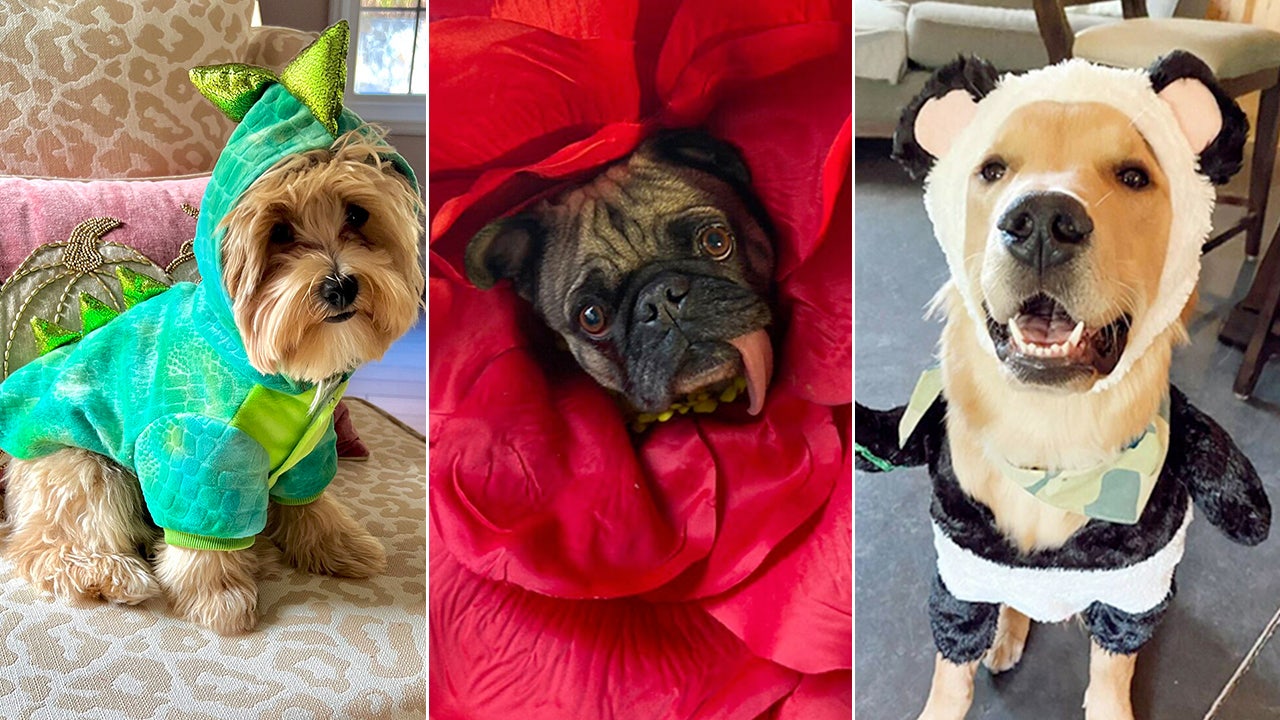 Halloween calls for costumes — and an even happier Halloween may mean pets are joining in on the fun.

See the adorable images and fun facts about some of these pets below.

GET CREATIVE WITH THESE CUTE HALLOWEEN COSTUME IDEAS FOR PETS

Pompeii the pug is dressed as a red flower for Halloween 2022.
(Nikolai Gionti)

Pompeii, a pug from Cleveland, Ohio, impressed plenty with her flower costume this Halloween.

Baker (left) and Aspen (right) are all dressed and ready to celebrate Halloween 2022.
(Carly Ford)

Teddy, a hava-malti-poo from New York, is energetic and a social butterfly who loves everyone he meets, his owner tells Fox News Digital.

Alice, a cuddly and friendly golden retriever from New York, is dressed in a lion costume.

Parker, a cat from New York, dressed as a convict for Halloween 2022.

His crime for being a “bad pet”? Biting!

Quinn, a two-year-old long-haired chihuahua, poses for the camera on Halloween 2022 — dressed as a bumblebee.
(Debbie W.)

Quinn, a long-haired chihuahua, is “the happiest little girl” and spreads love everywhere she goes, according to her owner.

Zion, a golden retriever from Indianapolis, is dressed in a comfy panda costume.
(Gil Maloney)

Zion is a golden retriever from Indianapolis, Indiana — and he is a banana and a panda this Halloween.

HALLOWEEN 2022 BRINGS DANGERS FOR PETS: HOW TO KEEP YOUR ANIMAL SAFE

Chino the yorkie of Cleveland, Ohio, is in the Christmas spirit this Halloween as he dons the classic red suit of Santa Claus.

Oona is dressed as a watermelon — while Wendell sports a dinosaur costume.

Boomer, a three-year-old mixed breed, is wearing a Bruins hockey jersey to support his favorite team amid Halloween and all year round.
(Matt and Alexa Reilly)

Boomer is owned by a pair of married Boston Bruins fanatics — so he wears a Bruins jersey every year on Halloween to support his ice hockey team.

Boomer cheers his team on from his home in Apex, North Carolina.

HALLOWEEN QUIZ! HOW WELL DO YOU KNOW THESE SURPRISING FACTS ABOUT THE SPOOKY HOLIDAY?

Sinatra, an American bully, is dressed in an elf costume while celebrating at home in Cleveland, Ohio.

Wearing the signature brown uniform, Louie the dog is dressed as a UPS worker for Halloween.
(Alison Nemecek)

Louis is a cavachon from Seven Hills, Ohio.

This year, Louis is dressed as a UPS delivery worker.

Ollie, a dog from New York City, is ready for Halloween dressed as a blue shark.
(Amy Lewis)

Ollie is a mini goldendoodle who lives in Manhattan. In this photo dated Oct. 31, 2022, Ollie hides under his shark Halloween costume.
(Amy Lewis)

Ollie is a 16-week-old mini goldendoodle who lives in Manhattan.

Noki the dog glances at the camera while dressed as a lion this Halloween.
(Nick LaMonica)

Noki of Chicago, Illinois, is a cavapoo. Noki is dressed as a lion for Halloween.

Molly, a sweet and vocal dachshund from Upstate New York, is dressed as Cookie Monster for Halloween — complete with a chocolate chip cookie.

Phoebe the chihuahua poses with her paws crossed on Halloween 2022 in her Cleveland home.
(Kylie Turner)

Phoebe is a chihuahua from Cleveland, Ohio.

Pheobe is wearing a sombrero and a colorful poncho.

Storm, a German shepherd, is from Long Island, New York.

Storm is very energetic. She loves to spend time outdoors and chase after bugs, her family tells Fox News Digital.

Rusty (left) and Simba (right), from West Sayville, New York, lie in a pile of Halloween candy while dressed as pumpkins.
(Nikki Spalma)

Bentley the dog stands outside in Pittsburgh while posing in a superhero pet costume.
(Koryn Bender/Preston Vigna)

Bentley, a black lab/rottweiler mix from Pittsburgh, Pennsylvania, is also dressed as a superhero this Halloween.

Boomer, a mixed pup from Massachusetts, is dressed as a cowboy for Halloween — complete with a hat and bandana.

Mully, a mixed-breed dog also from Massachusetts, poses in a Buzz Lightyear costume from the “Toy Story” movie franchise.

Milo, a havapoo (havanese poodle) from New Jersey, is dressed up as a hot dog with mustard for Halloween.

Nicole Pelletiere is a senior editor on the lifestyle team at Fox News Digital.

One thought on “Photos: Best 2022 pet costume submissions from around the US this Halloween”