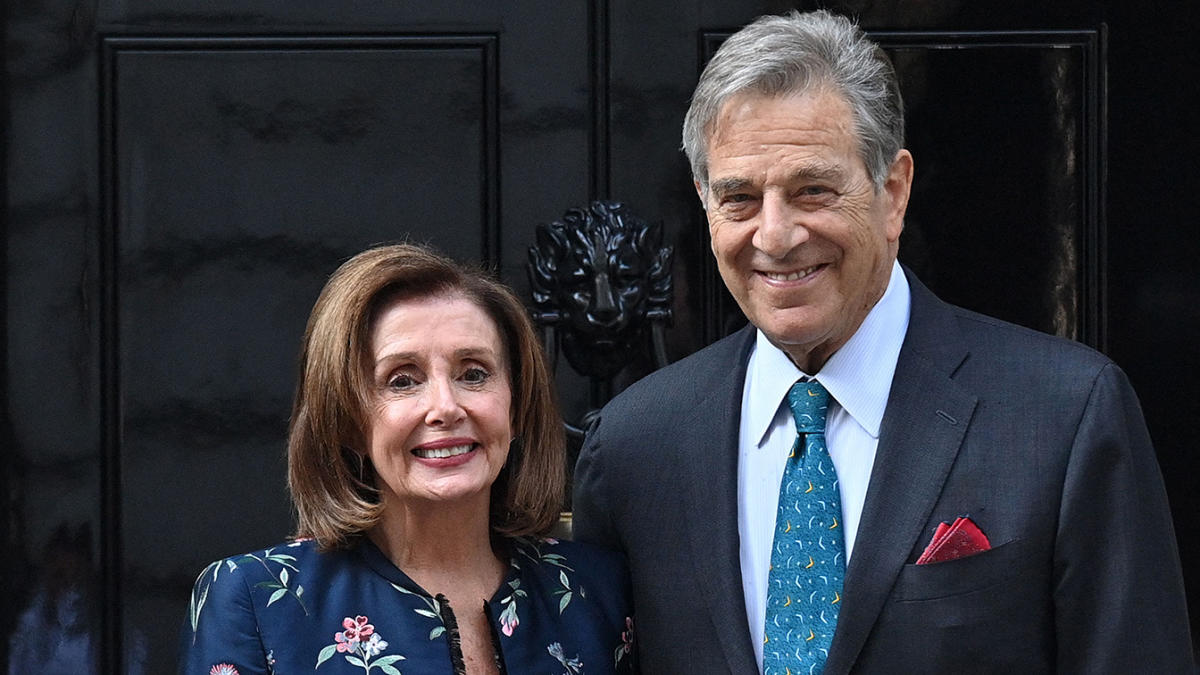 In the wake of Friday’s attack on House Speaker Nancy Pelosi’s husband, Paul, at the couple’s San Francisco home, some Republicans have seen fit to either joke about the incident or promote unfounded conspiracy theories about it.

On Sunday evening, Rep. Clay Higgins, R-La., posted a tweet referencing a baseless theory that Paul Pelosi had invited the suspect in the case, 42-year-old David DePape, into his home to have sex with him. The inspiration for that fictional account seems to have come from the fact that Pelosi — who was sleeping when the intruder attacked him while shouting, “Where’s Nancy?” — was in his underwear and struggling with DePape when police arrived. According to federal authorities, DePape reportedly told San Francisco police that he planned to hold Nancy Pelosi hostage and break her kneecaps if she answered his questions with what he considered to be lies.

Higgins posted an unrelated photo of Nancy Pelosi covering her eyes with her hands, above which he wrote, “That moment you realize the nudist hippie male prostitute LSD guy was the reason your husband didn’t make it to your fundraiser.” Facing an outcry, Higgins has since deleted the tweet, but he has not commented further about it.

While stumping for Virginia Republican congressional candidate Yesli Vega on Friday, Virginia GOP Gov. Glenn Youngkin also made light of the attack. “Speaker Pelosi’s husband had a break-in last night in their house, and he was assaulted,” Youngkin said. “There’s no room for violence anywhere, but we’re gonna send her back to be with him in California.”

In a subsequent appearance on Newsmax TV, Youngkin was asked repeatedly if he wanted a “do-over” on that comment. Instead, he simply reiterated that he believed that “there is no room for violence in America.”

Donald Trump Jr., meanwhile, shared an Instagram post on Sunday night featuring a photograph of a hammer on top of a pair of Hanes underwear that he captioned, “Got my Paul Pelosi Halloween costume ready.” Trump Jr. doubled down on Monday, reposting the meme and adding the comment, “The internet remains undefeated… Also if you switch out the hammer for a red feather boa you could be Hunter Biden in an instant.” He also shared on Instagram a meme that showed two men having sex and the older one on the phone telling police he’s being attacked.

Police say DePape was carrying a bag with zip ties and duct tape with him when he broke into the home and accosted Paul Pelosi. Prior to the attack, he had posted right-wing “memes and conspiracy theories on Facebook about Covid vaccines, the 2020 election and the January 6, 2021, attack on the Capitol,” according to CNN.

The speaker wasn’t home, but Paul Pelosi, 82, suffered a fractured skull and underwent surgery at a local hospital. He is expected to make a full recovery.

On Sunday, Twitter’s new owner, Elon Musk, also promoted the conspiracy theory about the unfounded connection between Paul Pelosi and his attacker.

“There is a tiny possibility there might be more to this story than meets the eye,” Musk tweeted, along with a link to an account of the attack in the Santa Monica Observer, a site with a history of posting right-wing misinformation.

Musk subsequently deleted the tweet, but he did not post any admission that it was false or apologize for defaming Pelosi. Instead he mocked the New York Times for accurately reporting what he had done.

Former Donald Trump adviser Roger Stone also sowed doubt about the attack, portraying the reporting of the incident as not credible. Conservative author and Trump supporter Dinesh D’Souza posted a number of tweets to his 2.5 million Twitter followers spreading misinformation about the event that have largely been based on subsequently retracted reports that DePape was also in his underwear and that a third person had been present.

Wendy Rogers, a Republican state senator in Arizona, shared a phony Amazon listing for a “Paul Pelosi Fake Attack Plastic Novelty Item” that included a blood-stained hammer. Anthony Sabatini, a Republican state legislator in Florida, posted “RELEASE THE PELOSI TAPES” on Twitter. (It’s not clear what tapes he is referring to.)

Republicans and conservatives have long demonized Nancy Pelosi, the first female House speaker in the U.S., and some have previously joked about harming her physically. In 2021, at a fundraiser in Nashville, House Republicans from Tennessee presented House Minority Leader Kevin McCarthy with an oversize gavel as a gift. “I want you to watch Nancy Pelosi hand me that gavel,” McCarthy said. “It’ll be hard not to hit her with it.”

Last Wednesday, Rep. Tom Emmer, R-Minn., posted on Twitter a video of himself firing a rifle and the hashtag #FirePelosi. In an interview with CBS on Sunday, Emmer was asked if he would take down the tweet and if he would stop running ads focused on Pelosi. He declined to do either.

Not every Republican, however, was unwilling to condemn the attack on Pelosi’s husband.

“This is an outrage and our hearts are with the entire Pelosi family. ⁦We pray Paul will make a full recovery,” former Vice President Mike Pence tweeted on Friday. “There can be no tolerance for violence against public officials or their families. This man should be prosecuted to the fullest extent of the law.”

Senate Minority Leader Mitch McConnell also issued statements decrying the attack. McCarthy did not, drawing criticism from Democrats such as Rep. Alexandria Ocasio-Cortez, D-N.Y. When asked by Fox News about the attack on Sunday, McCarthy said, “Violence or threat of violence has no place in our society. What happened to Paul Pelosi is wrong.”

“The lack of a more public reaction by McCarthy is notable since he could be speaker himself, if Republicans win the House next week, and would have the responsibility of fulfilling the institutional duties of a role that is sometimes supposed to supersede partisan politics,” observed CNN’s Stephen Collinson. “His comments also appear less direct than Speaker Pelosi’s reaction to the shooting of GOP Whip Steve Scalise at a congressional baseball practice in 2017, which she described as a ‘despicable and cowardly attack’ on Congress itself and said at such times there were ‘no Democrats or Republicans.’”

Liberal commentators such as MSNBC columnist Michael Cohen (no relation to former President Trump’s ex-lawyer) have speculated that Republicans fear blowback to any expression of sympathy for Pelosi after years of fomenting hatred of her.

During the Trump administration, conservative activists posted altered videos of Pelosi on social media, including one that slowed her speech down to make her seem drunk and another — which was tweeted by Trump — to make it seem like she was stammering. Trump famously dubbed her “Crazy Nancy.”

As the New Republic’s Michael Tomasky notes, Trump encouraged political violence during his 2016 presidential campaign. “We can’t discuss this topic without noting the many times during his rallies back in 2016 when Trump told his crowds to rough up hecklers, promised to pay their legal bills, pined about the old days when they knew how to take care of troublemakers — and, of course, suggested that someone might shoot Hillary Clinton.”

During the Jan. 6, 2021, riot at the U.S. Capitol, some of Trump’s followers who stormed the building laid waste to Pelosi’s office, searching for her and shouting, “Nancy! Nancy Pelosi!” “Where you at, Nancy?” and “Where’s Nancy?” One of the attackers made a video in which she said, “We broke into the Capitol. We got inside. We did our part. We were looking for Nancy to shoot her in the frickin’ brain. But we didn’t find her.”

But many Republicans are uninterested in reflecting on whether their rhetoric has contributed to violence by their supporters.

In the days following the attack at Pelosi’s San Francisco home, an often-repeated talking point on conservative media outlets like Fox News has been that it illustrates how Democrats have allowed crime to grow out of control there.

Kari Lake, the Republican nominee for governor in Arizona, told Fox News on Friday that voters are “realizing that it’s the policies of the left that have made our streets more dangerous” in response to a question about the assault on Paul Pelosi. “The crimes, whether they be a small crime where your car’s broken into to a violent attack, it’s because of leftist elected officials who have not enforced the laws,” she said.

Charlie Kirk, founder of the conservative advocacy organization Turning Point USA and host of a livestream talk show, said on his show Monday that conservatives bear no responsibility for the attack and that they should bail DePape out of jail. “Why is the conservative movement to blame for gay schizophrenic nudists that are hemp jewelry maker breaking into someone’s home — or maybe not breaking into someone’s home? Why are we to blame for that exactly?” Kirk said. “And why is he still in jail? Why has he not been bailed out? And by the way, if some amazing patriot out there in San Francisco or the Bay Area wants to really be a midterm hero, someone should go and bail this guy out … bail him out, and then go ask him some questions.”

Unlike his son, Trump has yet to issue a statement on the attack, but he did briefly condemn it in an interview on Sunday with Americano Media, a conservative Spanish-language outlet. “With Paul Pelosi, that’s a terrible thing, with all of them it’s a terrible thing,” Trump said. He then pivoted to arguing that cities are plagued by out-of-control crime. “Look at what’s happened to San Francisco generally,” Trump said. “Look at what’s happening in Chicago. It was far worse than Afghanistan.”