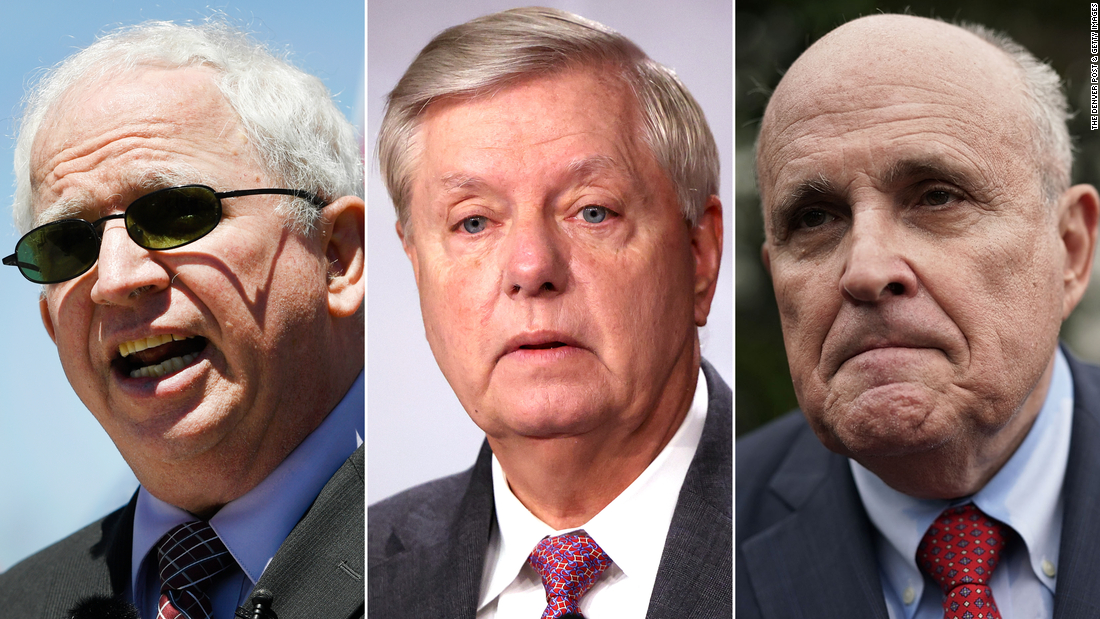 Fulton County District Attorney Fani Willis has been leading the investigation digging into Trump’s actions in Georgia. Several state officials have already been subpoenaed and have appeared before the special grand jury.

But the latest raft of subpoenas marks a new phase, as the grand jury seeks testimony from witnesses who were members of Trump’s inner circle.

Willis has been investigating potential crimes including solicitation of election fraud, making false statements, conspiracy, racketeering and threats related to election administration. The special grand jury does not issue indictments but rather collects evidence and issues a report on whether Trump or any of his allies should face charges. If it recommends an indictment, Willis could then pursue an indictment from a regularly seated grand jury in Fulton County.

The special grand jury wants to hear from Graham because the Republican senator allegedly made two calls to Georgia Secretary of State Brad Raffensperger and his staff in the wake of the 2020 election. According to court filings, Graham “questioned Secretary Raffensperger and his staff about reexamining certain absentee ballots cast in Georgia in order to explore the possibility of a more favorable outcome for former President Donald Trump.”

The filing also states that Graham brought up allegations of widespread voter fraud, which have been widely debunked. A spokesperson for Graham did not immediately respond to a request for comment.

Giuliani is one of a handful of witnesses who were subpoenaed related to their appearance before Georgia state lawmakers in December 2020. During his early December appearance, Giuliani provided testimony, witnesses and so-called evidence that demonstrated voter fraud, according to court filings. Even after those allegations were investigated and disproven, Giuliani “made additional statements, both to the public and in subsequent legislative hearings, claiming widespread voter fraud in Georgia during the November 2020 election,” by re-upping the same previously debunked evidence, according to court filings.

“There is evidence that the Witness’s appearance and testimony at the hearing was part of a multi-state coordinated plan by the Trump Campaign to influence the results of the November 2020 election in Georgia and elsewhere,” according to court filings.

Bob Costello, Giuliani’s attorney, said his client has not yet received a subpoena and declined to comment further.

The grand jury also wants to hear from Ellis about her appearance before Georgia lawmakers peddling debunked election fraud claims, according to court filings. She did not immediately respond to a request for comment.

Similarly, Willis’ team subpoenaed Jacki Pick Deason, whom court filings described as an attorney for the Trump campaign’s legal efforts. Deason presented heavily edited video before Georgia lawmakers in that December 2020 hearing that purportedly showed election workers producing “suitcases” of illegal ballots, according to court filings. That allegation was investigated by state election officials and quickly proven to be false.

Deason “possesses unique knowledge concerning communications between herself, the Trump campaign, and other known and unknown individuals involved in the multi-state, coordinated efforts to influence the results of the 2020 election in Georgia and elsewhere,” according to the court filings.

Willis has also been scrutinizing the plot to try to put forth a fake slate of pro-Trump electors in Georgia. In the latest round of subpoenas, investigators signaled an interest in hearing from both Eastman and Chesebro for their alleged roles in pushing the fake elector plan.

Eastman testified before Georgia lawmakers in December 2020, during which “he advised lawmakers that they had both the lawful authority and a ‘duty’ to replace the Democratic Party’s slate of presidential electors,” and made unfounded claims of voter fraud, according to court filings. An attorney for Eastman did not immediately respond to a request for comment.

Chesebro allegedly coordinated with Georgia Republican Party and Trump campaign officials to help prepare the slate of fake electors. According to court documents, Chesebro provided a Microsoft Word template for Georgia Republicans to use in a December 2020 meeting where they cast their bogus Electoral College votes. Chesebro also did not immediately respond to a request for comment.

Mitchell is of interest to the grand jury because she was on the now infamous call where Trump pressed Raffensperger to “find” the nearly 12,000 votes necessary for Trump to win in the Peach State, which he lost to Joe Biden. Mitchell also parroted claims of voter fraud on the call, the court filing noted. She did not immediately respond to a request for comment.

This story has been updated with additional details.