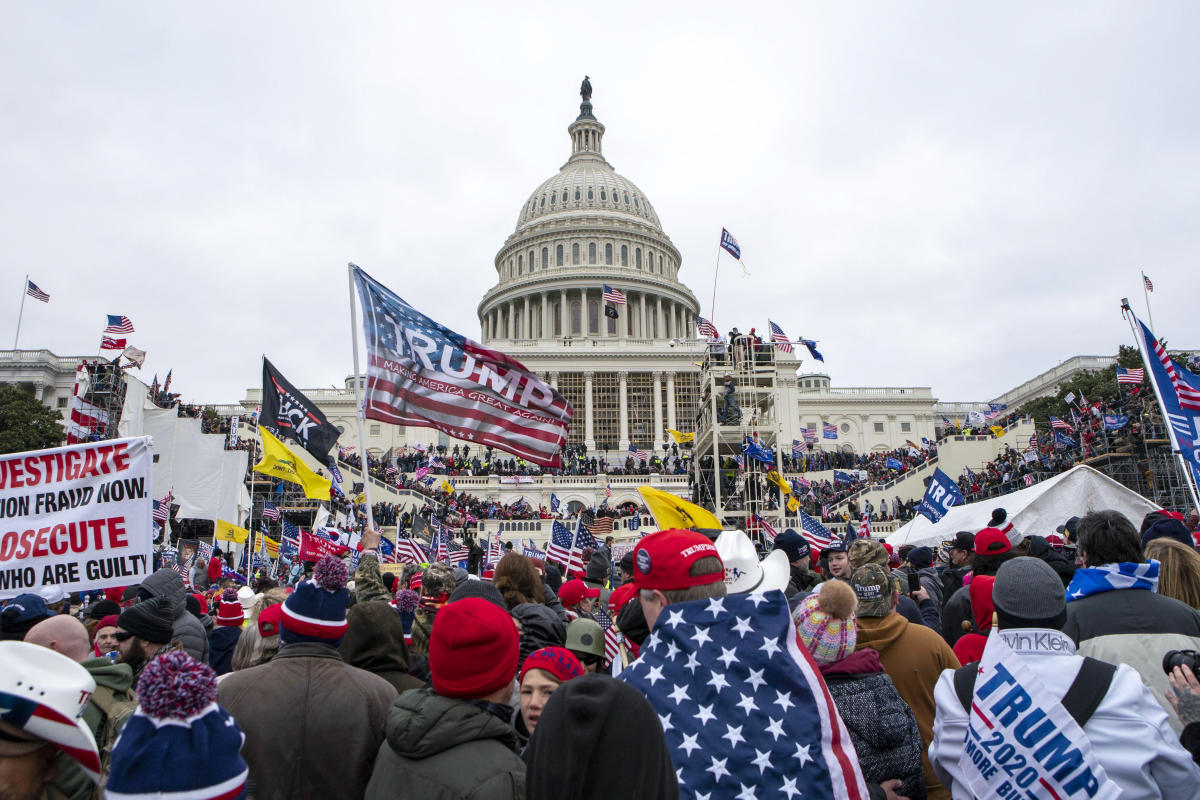 A member of the far-right Oath Keepers who pleaded guilty to his role in trying to disrupt the transition of presidential power broke down on the stand Monday as he testified against his former allies.

“I’m really sorry for what I did,” said Graydon Young of Florida, who pleaded guilty in June 2021 to a conspiracy to obstruct Congress’ Jan. 6, 2021, meeting to certify Joe Biden’s victory in the 2020 election.

Halting twice to choke back sobs, Young said he pleaded guilty because he had committed crimes, and that in order “to repent and be forgiven, you have to confess. Completely and wholly.”

“I won’t do anything like that ever again,” he said. “It’s really embarrassing.”

Young’s testimony provided jurors with a firsthand account of the Oath Keepers’ preparation to travel to Washington ahead of Jan. 6 and their decision to join the crowd that surged past police and into the Capitol. He is one of the prosecutors’ key witnesses in the seditious conspiracy trial of Oath Keepers founder Stewart Rhodes and four associates, Kelly Meggs, Kenneth Harrelson, Jessica Watkins and Thomas Caldwell.

The five Oath Keeper leaders are charged with plotting to violently oppose the transfer of power from Donald Trump to Biden.

Young’s testimony was the second time a member of the group who pleaded guilty to participating in the conspiracy took the stand against his former colleagues. Jason Dolan, another Florida Oath Keeper, testified earlier in the month.

Dolan and Young both described struggles amid the Covid pandemic, combined with a deluge of pro-Trump media that fueled their beliefs that the 2020 election had been stolen. Young described an unhealthy diet of Facebook and YouTube content that he said left him “ginned up” about the election results. He withdrew from his family and became consumed by national politics, which led him to join the Oath Keepers in the weeks after Election Day 2020. His sister, Laura Steele, a fellow Oath Keeper, is awaiting trial for her part in the alleged obstruction conspiracy.

Young recalled first meeting some members of the group when he joined a security detail for Roger Stone, a longtime political adviser and ally of Trump, in December 2020.

Young described feeling deflated as Jan. 6 approached, that the anger of the Oath Keepers wouldn’t be enough to overturn the 2020 election, and he raised those concerns in Signal chat groups that included other Florida Oath Keepers and Rhodes, the national leader of the group. But he said Rhodes “re-galvanized” him by suggesting he might have a direct line of contact with Trump and urging the group to take a stand in Washington.

In Washington, Young joined a security detail for one of the speakers at Trump’s Jan. 6 “Stop the Steal” rally before heading to the Capitol with other Oath Keepers. On the way, he heard from Meggs that the Capitol had been breached.

“Unfortunately for me, at the time, it meant I felt it as like a Bastille-type moment in history, where in the French Revolution it was that big turning-point moment,” Young said. “It was exhilarating. I felt like I was going to be an important or an integral part of what was happening.”

Young recalled talking with Harrelson and other Oath Keepers about the “apparent equipment the police had on.”

“They had on plastic armor covering, we talked about how effective or ineffective that would be against weapons, firearms,” Young said.

At this point, Young said he and his sister began feeling concerned about the group’s intentions and their potential legal exposure. The two of them left for Steele’s house in North Carolina, where they burned their gear, he said.

“My sister and I were solidly in freakout mode and scared,” he said, adding, “That’s when the embarrassment about the whole thing kicked in … I’m going to have to tell my mom.”

Rhodes’ attorney grilled Young about whether any of the group’s leaders ever explicitly told him to storm the Capitol or described the objectives of the conspiracy. Young said he viewed it as an implicit plan. Young also agreed that as part of his plea negotiations with the government, he hopes to receive a relatively lenient sentence in exchange for his cooperation.

One thought on “‘Sorry for what I did’: Oath Keeper who pleaded guilty for Jan. 6 breach breaks down on the stand”