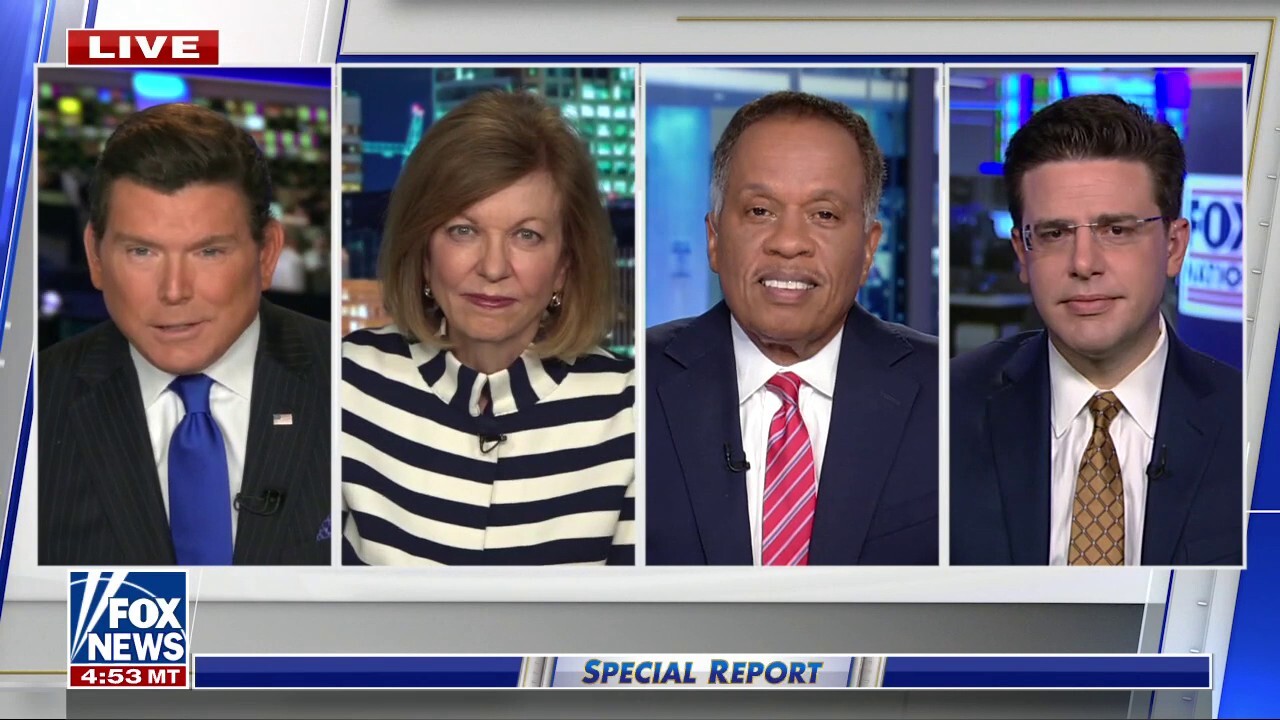 This is a rush transcript from “Special Report,” May 20, 2022. This copy may not be in its final form and may be updated.

TOM HOMAN, FORMER ACTING ICE DIRECTOR: This is a historic illegal immigration crisis. There is no upside to this at all.

REP. TONY GONZALES, (R-TX): The border is completely open, regardless of what Secretary Mayorkas or the administration says.

SEN. MARK KELLY (D-AZ): We continue to have a border security problem at the southern border.

BAIER: I thought we were doing — this as the judge says Title 42 must stay in place. And this is just received from the administration, saying they are going to appeal that judge’s ruling. The “CDC has now determined in its expert opinion that continued reliance on this authority is no longer warranted in light of the current public health circumstances. That decision was a lawful exercise of centers for disease CDC’S authority.” So the Biden administration is saying the DOJ, it’s going to appeal this judge’s ruling, which essentially keeps everything status quo. May 23rd does not mean a lifting of Title 42.

But what does it mean big picture? Let’s bring in our panel, Susan Page, Washington Bureau Chief at “USA Today,” Juan Williams is a FOX News analyst, and Matthew Continetti, fellow at the American Enterprise Institute, also author of “The Right, The Hundred Year War for American Conservatism.” Matthew, congrats on the book. And what do you think? This judge, is he saving the Biden administration in some way, shape, or form, at least temporarily?

MATTHEW CONTINETTI, AMERICAN ENTERPRISE INSTITUTE: Well, he is saving the Biden administration from making a status quo worse. But, Bret, the status quo is already very bad. This is a tremendous crisis on our southern border that’s putting incredible pressure on the Border Patrol, on customs, on the communities there on the southern border. And it’s rising in level of priority for the American voter. So, even though they might have dodged something of a bullet with having the judge issue this injunction, the issue on the border remains to be addressed, and Biden isn’t doing it.

BAIER: Susan, this is a massive issue. Obviously, the administration’s appealing this. It doesn’t make the issue go away, obviously.

SUSAN PAGE, WASHINGTON BUREAU CHIEF, “USA TODAY”: No. But the judge’s decision today gives the administration some more time to try to figure out how to get better control of the border, what to do once Title 42 eventually is lifted. It’s like, it’s the bad news was good news in a way for them. They continue to argue that it’s inappropriate to continue to Title 42, and yet, this gives them a chance to try to deal with an issue that has united Republicans and divided Democrats.

JUAN WILLIAMS, FOX NEWS POLITICAL ANALYST: Well, I think that there is a real argument here. And I must say you have a Trump judge today who issued this preliminary injunction. You have other Trump judges who have said they don’t see how Title 42 should be allowed to continue. So it’s not necessarily political here.

What you have is a situation where Title 42 is a World War II law that was put in place to stop the spread of malaria and T.B. when people were coming from Europe at that time. And it’s applied here even as CDC says we have vaccines, we have treatments. And what we’re really doing, says the Biden administration lawyers, is illegally stopping people who are seeking asylum and have every right to seek asylum.

So, with this, it’s so crazy because so many of the people who now get thrown out on the basis of Title 42 simply walk back in because they have never been properly prosecuted as they would be if they had been deported under other laws.

BAIER: Yes. And the DHS secretary says the process is all screwed up, and to Susan’s point, they have to figure out a plan. Now they have a little bit more time to try to do it. Democrats and Republicans jumping on that.

Meantime, the John Durham investigation, now the Michael Sussmann case in trial, although after today is it going to be called the Hillary Clinton case, because take a listen.

DEVIN NUNES, TRUMP MEDIA AND TECHNOLOGY GROUP CEO: Durham’s issue here is not going to be that he doesn’t have evidence. His issue is going to clearly be that 95 percent of the people in Washington, D.C., didn’t vote for Donald Trump, and then you have jurors who definitely supported Hillary Clinton.

ANDREW MCCARTHY, FORMER ASSISTANT U.S. ATTORNEY: What the judge was basically telling Durham’s prosecutors is, look, this is the Michael Sussmann false statements trial. You are not turning it into the Hillary Clinton trial. And yet, it seems like that’s exactly what the defense did today.

ROBERT CHARLES, FORMER NAVAL INTELLIGENCE OFFICER: If you start to pull a thread out of the sweater, that sweater is going to come apart ultimately. This is the thread that is pulling at the entire Clinton campaign.

BAIER: And Matthew, this is how CNN writes it. Again, this is CNN writing it, “Hillary Clinton personally approved plan to share Trump-Russia allegation with the press in 2016. Campaign manager says the trial has shed light on the dark arts of political opposition research and how campaigns dig up dirt and plant stories in the press.” Implications?

CONTINETTI: I was reminded of the moment during the Watergate hearings when Nixon aide Alexander Butterfield revealed the existence of the taping system and it shocked the world. Here Robby Mook is saying, yes, Hillary Clinton gave the order. She ordered the code red. And even though I think it’s right that the legal experts are going to focus and the trial will focus on what Sussmann said, I think what Hillary’s role will be a major factor in any congressional investigations, Bret, that may start next year when the Republicans take over the House.

BAIER: But Susan, to Jonathan Turley’s point, what are we getting at here? Really, this is a case about Michael Sussmann lying to the FBI. But does it get to a John Durham narrative that lays all of this out?

PAGE: Matt just mentioned Watergate, and I’m thinking it’s been 50 years since Watergate, since the Watergate scandal, and we are still trying to figure out some of the implications, some of the motivations, what real really happened, who did what? Do you think 50 years from now we will still be talking about what happened with Russia and efforts to make Russia — what Russia actually did in the 2016 election and what allegations that the Trump people have denied and debunked in some cases? Maybe so.

BAIER: Yes. I don’t know. I do know that, Juan, there is not a lot of places that are covering it, this trial, because they have to explain it, and they haven’t explained it from the beginning.

All right, midterm races. Juan, we asked each of you to pick a race of interest. Juan, what did you choose?

JUAN WILLIAMS, FOX NEWS POLITICAL ANALYST: I think everybody has got eyes on Pennsylvania, on the GOP Senate primary there. Obviously, no winner as of yet. I think today the A.P., which often makes the call, said they can’t make a call. You got fewer than 1,000 votes separating, I think it’s 1,000 votes separating Mehmet Oz and David McCormick. So, this is dividing the Republican ranks going into a very important Senate race. I think everybody should keep an eye on it.

CONTINETTI: My race is the Nevada Senate race. The Republicans need to pick up one Senate seat if they hold the four retiring seats, and Nevada is a good place to do it. Adam Laxalt is a strong candidate against an incumbent who doesn’t really have a high profile either in D.C. or in Nevada.

PAGE: I’ve been looking at the Georgia secretary of state race. We don’t usually pay that much attention to secretary of state races. That’s different this year. We have the Republican secretary of state in Georgia who stood up for a free and fair election. He has gotten primaried by a candidate backed by President Trump. This race, this election on Tuesday in the primary will tell us just how weaponized you can make the debunked allegation that the election was stolen in 2020.

BAIER: Going into that election Tuesday, and it seems like if you go by the polls going in that the incumbent Governor Kemp is going to sail to that battle David perdue. Obviously, you don’t know until Election Day. But Susan, what is that — does that say anything about Georgia Republicans?

PAGE: Yes, it does. You see a real difference between that Senate race and the gubernatorial race. In your poll, Kemp was up 32 points. That’s like you don’t have a candidate running against him, even though he has been the candidate, the Republican Donald Trump would most like to defeat this year.

BAIER: And it’s also interesting to watch the Donald Trump versus Mike Pence endorsement around the country.

Panel, as always, you all are winners. Have a good weekend.

Content and Programming Copyright 2022 Fox News Network, Inc. Copyright CQ-2022 VIQ Media Transcription, Inc. All materials herein are protected by United States copyright law and may not be reproduced, distributed, transmitted, displayed, published or broadcast without the prior written permission of VIQ Media Transcription, Inc. You may not alter or remove any trademark, copyright or other notice from copies of the content.