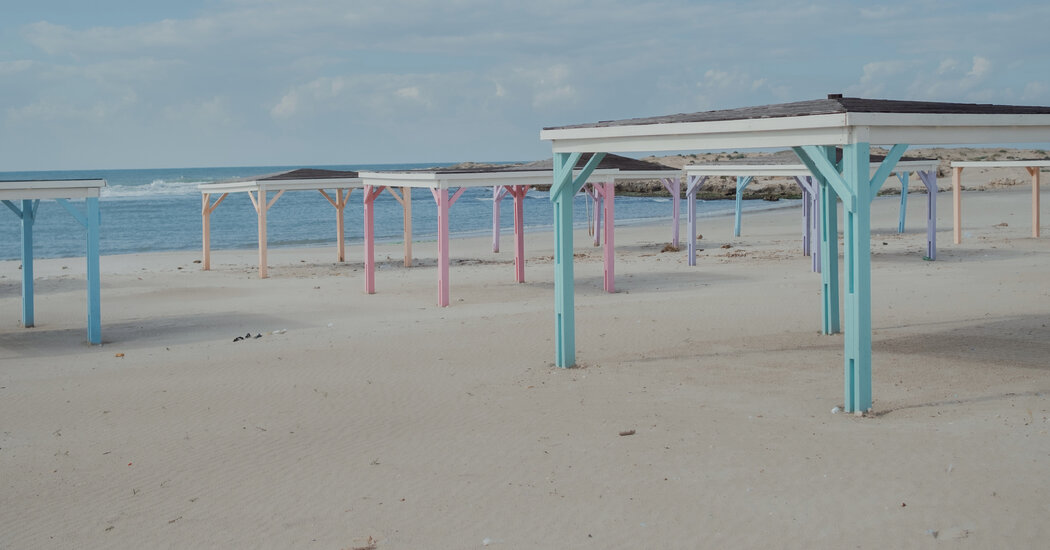 DOR BEACH, Israel — For many Jewish Israeli visitors to Dor, a Mediterranean beach, its unremarkable parking lot is where they leave their cars on the way to the sea.

For many Palestinian citizens of Israel who live nearby, the parking lot is on the site where they say dozens of their relatives were buried in a mass grave after a massacre in 1948, during the war that cemented the nascent state of Israel.

“When I am here, I think of them,” said Kamal Masri, 57, an Arab steelworker on a recent visit to the beach. Mr. Masri’s relatives lived in Tantura, a Palestinian village on this site that was captured by Israeli soldiers in May 1948 and later razed and replaced by two Israeli resorts, Dor and Nahsholim. “I feel,” he added, “like I can see them.”

But to local Israeli leaders it feels implausible, if not impossible, that Palestinians were either massacred or buried en masse here, just a few years after the Holocaust. “It’s hard to imagine a thing like that,” said Yael Manor, the chairwoman of the Nahsholim administrative committee. “It wasn’t in keeping with the times that they would execute innocent people.”

The legacy of the Arab-Jewish war from 1947 to 1949, during which the state of Israel was founded, has long been shaped by versions of these two dueling narratives. The tension between the two continues to influence the Israeli-Palestinian conflict today.

To Palestinians, the war is remembered as the Nakba, or “catastrophe,” in which 700,000 Arabs fled or were expelled. Millions of their descendants still live as refugees. And over the years there have been allegations of other massacres.

To many Israelis, the conflict was a war of independence and survival against invading Arab armies and hostile local militias who rejected a United Nations plan to divide the land between Jews and Arabs, and who also committed atrocities. By this narrative, the Palestinian exodus was largely voluntary and encouraged by Arab leaders, and was accompanied by the simultaneous persecution and expulsion of Jews from their homes in Palestine and elsewhere in the Middle East.

The puddled parking lot at Dor Beach is the latest arena for this battle over Israel’s founding story. It is also the latest instance of Israeli engagement, if halting, with parts of the Palestinian narrative.

Israeli veterans had often dismissed longstanding Palestinian claims that the Israeli Army conducted a massacre in Tantura in the hours after they took control of the town in May 1948, days after the establishment of the Israeli state.

In 2000, a group of veterans sued an Israeli graduate student who had written a thesis, citing dozens of Arab and Jewish witnesses, in which he said that Israeli soldiers killed scores of captured Tantura villagers before expelling others. The student, Teddy Katz, briefly recanted his claim under social pressure, ending the case. And though Mr. Katz quickly retracted his retraction, his university later downgraded the status of his degree, citing irregularities in his thesis.

But a new documentary from an Israeli filmmaker, titled “Tantura,” has reopened the furor, setting off new debate in the Israeli media, at the University of Haifa, where Mr. Katz studied, and among Arab lawmakers.

“Tantura” features new interviews with Israeli participants in the operation, as well as old recordings of conversations between Mr. Katz and Israeli witnesses. While some veterans continued to deny wrongdoing, others told the film crew that soldiers did kill Palestinian prisoners after Tantura was captured, and that there was a cover-up afterward.

“They went wild in Tantura,” said one interviewee, Yossef Diamant, an Israeli veteran who fought in Tantura and witnessed the aftermath. “It was silenced,” he added.

In the film, Mr. Diamant recalled one soldier using a machine gun to kill captured men as they sat inside a barbed-wire enclosure, and remembered others chasing after villagers with a flame thrower and raping a woman. Reached by phone, Mr. Diamant declined to meet for an interview with The New York Times, but said the soldiers had acted without orders.

A second veteran, Chaim Levin, told the film crew that he recalled seeing a man wearing a wide-brimmed hat kill 15 or 20 prisoners “in cold blood” with a pistol. His family declined to make Mr. Levin, now 101, available for a follow-up interview, and criticized the film’s findings.

The filmmakers showed Israeli Army documents that, while stopping short of mentioning a massacre, acknowledged that soldiers dug a mass grave in Tantura after it was captured, and vaguely referred to “acts of destruction” following the victory and the subsequent deportation of surviving residents.

The filmmakers also found aerial photographs from April 1948 and October 1949 that showed the sudden appearance, at some point in those 18 months, of a 38-yard trench that had been dug in the place where survivors and witnesses said the bodies were buried.

The present-day parking lot is on the site of that trench.

A lawyer, Giora Erdenast, who represented several veterans in the court case in 2000, described Mr. Diamant’s and Mr. Levin’s claims as “totally untrue.” Both sides may have killed a handful of enemy fighters shortly after they raised their hands in surrender, but “describing it as a massacre is totally ridiculous,” Mr. Erdenast said.

Advance screenings of the film, which is not yet showing in cinemas, have already resurfaced a public discussion, not only about Tantura, but also about 1948 in general.

The film has renewed calls, including from the longest-serving Arab Israeli lawmaker, Ahmed Tibi, for the exhumation of those who were killed, if their burial site can be found. It has also prompted academics at the University of Haifa to call for the restoration of Mr. Katz’s original degree.

To some Israeli historians, the film is an attempt to undermine Israel’s legitimacy.

“The goal is to say that Israel was born in sin,” said Yoav Gelber, a history professor at the University of Haifa. Mr. Gelber has always disputed reports of a massacre at Tantura, citing a paucity of other documentation. “It’s not history,” Mr. Gelber said, “and I doubt if it’s film making.”

Those who doubt the claims of a massacre note that other Arab villages in the area were left largely untouched by the war, and that their residents were allowed to stay.

The film’s director, Alon Schwarz, who describes himself as a staunch Zionist, said the film’s effort to set the record straight would bolster Israel, not damage it.

A lasting settlement with the Palestinians will only be possible, he said, if both sides recognize each other’s historical narratives. And in Israel’s case, this meant recognizing that while Arabs also committed atrocities in 1948, many Palestinians “got thrown out of here by force.”

Some Palestinian survivors and their descendants are campaigning to build a memorial for their relatives at the site, and have their bodies given a proper burial.

That is up to the regional council, which declined to comment on whether it would permit an excavation of the site.

But even if the authorities do dig up the parking lot, it isn’t clear what they might find.

While mapping the 38-yard trench documented in aerial photographs from 1949, a cartography firm featured in the film said it found visual signs that the ditch was empty by that point.

Even if bodies were buried there in 1948, the film concludes, they might already have been hidden elsewhere.

The film does not delve into the exact number of Palestinians alleged to have been killed after Tantura was captured — estimates vary wildly. It also does not reach a conclusion about whether any killings of prisoners were spontaneous or premeditated.

Yossi Offer, a historian of the brigade that captured Tantura and a son of one of the officers involved in the operation, said that he had concluded from conversations with his father’s fellow veterans that rogue Israeli soldiers had killed some prisoners in the heat of the moment, soon after their capture. Before being captured, Mr. Offer said, some Palestinian fighters had fought on after pretending to surrender, while others had mutilated several Israeli corpses, enraging the Israelis who later subdued them.

The subsequent killing of captured Palestinians was “the spontaneous act of idiots that happens in every battle,” but not a massacre, Mr. Offer said.

Khalil Deeb Jarban, 82, a retired fisherman who was 8 years old when the village was captured, recalled being detained on the beach, along with much of the village’s surviving population. Israeli soldiers and an Arab collaborator then slowly selected at least 20 men over the course of the morning, leading them to another part of the village, never to be seen again, Mr. Jarban said.

Mr. Jarban said he saw the men led away by the soldiers. “It happened,” he said, “and there’s no need to convince anyone.”