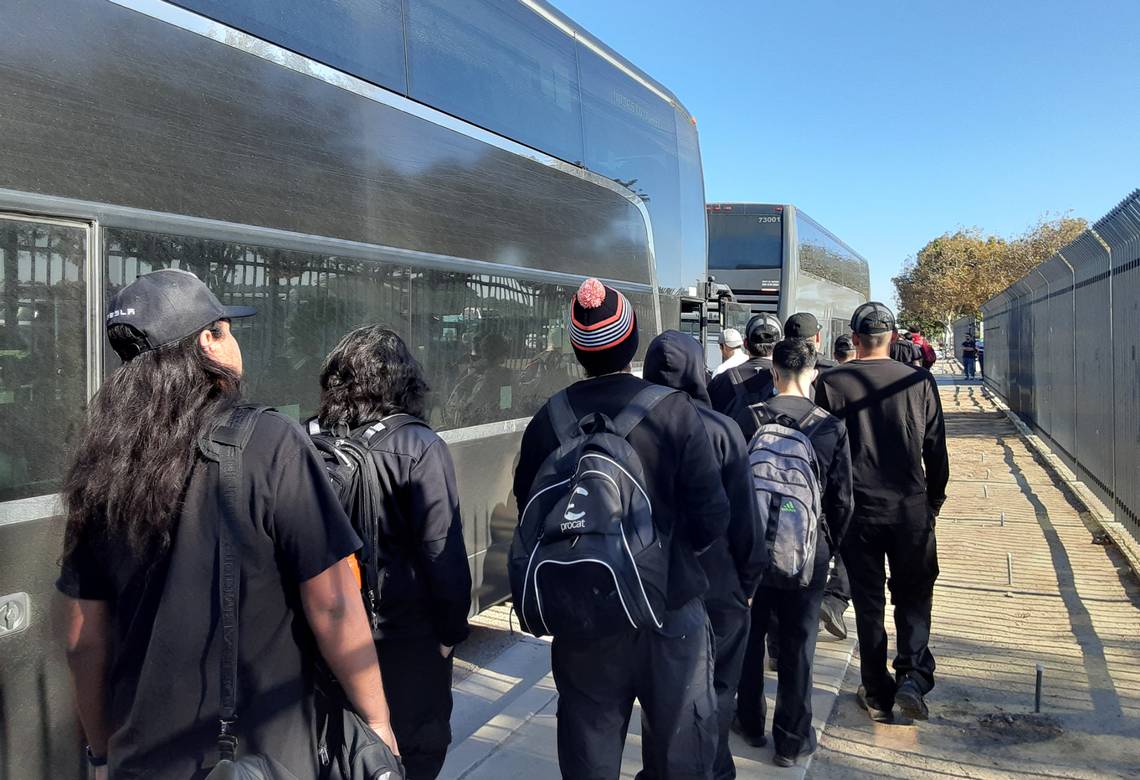 More than 100 men and women were lined up on the sidewalk in front of the Modesto Airport about 3 p.m. Thursday, waiting for three buses that would take them to their jobs with Tesla in the Bay Area.

The electric carmaker busing its workers from the Northern San Joaquin Valley to the Bay Area is not new, but it’s new for the Modesto Airport and lucrative for the city.

Tesla entered into a two-year lease with Modesto on Oct. 10 in which it will pay the city $40,000 a month for 500 parking spaces at the airport. That’s $480,000 a year, or nearly $1 million over the two years. Tesla has a factory in Fremont, a roughly 70-mile drive from Modesto through at times horrible commuter traffic.

The airport has plenty of parking. It has not had commercial passenger flights since 2014.

Thirty-two-year-old Modesto resident Juan Telles was among those in line Thursday. He said he’ a quality technician at the Fremont factory and has worked for Tesla for eight months. (Tesla did not respond to a question regarding the buses’ destination.)

Telles said taking the bus means workers can sleep, study for school, catch up on their emails and use the Wi-Fi. “Overall,” he said, “it’s less stressful. … I don’t have to spend as much on gas. I save $20 a day on gas. And I have a Prius.”

He and fellow Tesla workers used to park in Salida to catch the buses, Telles said. Several Tesla workers waiting in line said the move to the airport started Oct. 17.

Councilman David Wright has said that Tesla picked the airport because it was looking for a more central park-and-ride location for its workers throughout the Modesto region. Wright serves on the city’s Airport Advisory Committee and has said a city official briefed the committee around August about what was then a proposal.

Telles lives downtown, so the airport is much more convenient than driving to Salida.

But a Turlock woman waiting in line said she preferred Salida. She said it now takes the buses a little longer to get onto Highway 99. The woman, who declined to give her name, said the commute each way is 90 minutes to two hours, depending on traffic. She said driving by car takes just as much time.

The woman said she has worked for Tesla for about two years and is a production worker in the Fremont factory. She works four 12-hour days, followed by three days off. Those are long days when she adds in her commute. “Sleep,” she responded when she asked about an advantage of commuting by bus. “From there to here. Sleep.”

Tesla did not respond to a request for comment, and the city referred questions about Tesla’s operations at the airport to the carmaker. Telles said the buses make one stop on the trip to the Fremont factory, to pick up more Tesla workers at the Manteca Walmart.

About 8:30 a.m. Sunday, a man was waiting in front of the airport for an Uber driver to take him home. He said he lives in Merced and has worked for Tesla for two years. He declined to give his name but said he is a lead in production control at the Fremont plant.

He said he ordinarily drives to airport to catch a bus, but his car is being repaired. Two other men were standing together about 75 feet away. Both said they work for Tesla and were waiting for their ride home.

The Merced man said all of the buses based at the Modesto Airport take Tesla workers to and from the Fremont factory. He said the factory makes Tesla’s flagship cars: the models 3, Y, S and X.

He said he appreciates that Tesla provides this free service. He saves $600 a month in gas if he commutes by bus every day, he said, but he drives to work at times because of the flexibility it offers.

The Modesto Airport has not had commercial passenger flights since June 2014, when SkyWest departed. SkyWest had offered daily round trips to San Francisco, where Modesto passengers caught connecting flights. But the flights were hindered by cancellations and delays.

Except for the Tesla workers, the airport was slow Thursday afternoon. There was one person in the terminal waiting for a friend who had just landed. (The city’s website says the airport has about 200 general aviation aircraft, including corporate jets, twin- and single-engine aircraft, helicopters and ultralights.)

But a woman at the rental car counter said her business was brisk. She said most people who rent cars are not associated with the airport.

City spokeswoman Diana Ruiz-Del Re has said the money the city receives from Tesla can be spent only on the airport. The city did not respond by Friday on why the money has that restriction and how it could be spent to improve the airport.

One thought on “Tesla workers commuting from Modesto Airport. But there is no flight involved”