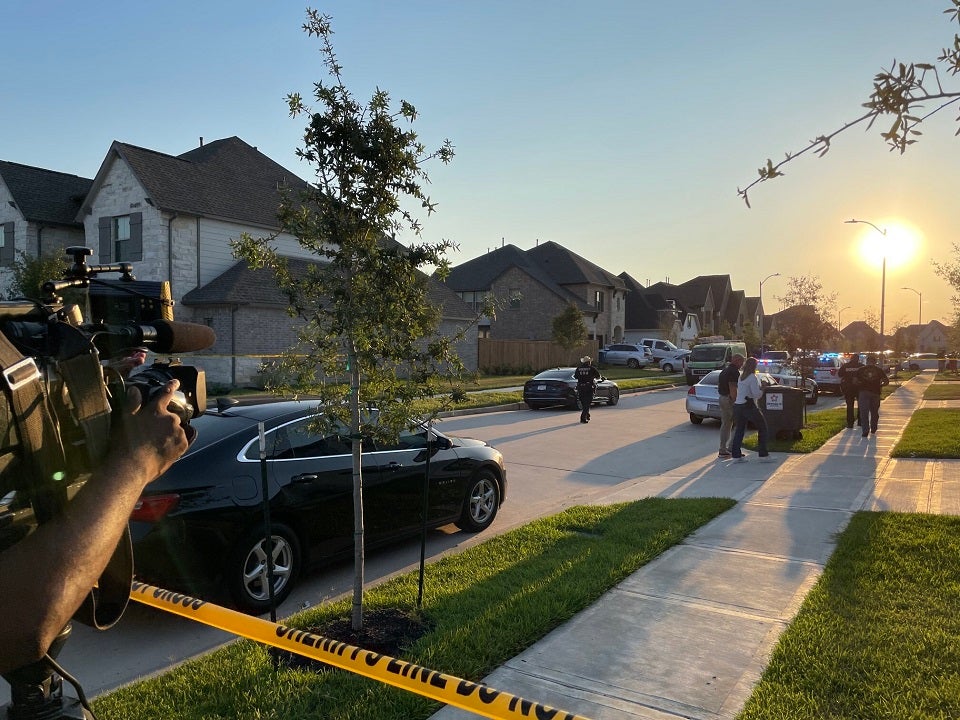 A Navy recruiter fatally shot his wife in their Texas home Thursday and injured an agent with the Naval Criminal Investigative Service (NCIS) before he was later killed by Texas authorities, officials said.

The shooting occurred when two NCIS agents were talking with a woman about domestic violence issues with her husband at a home in the Houston suburb Atascocita, said Harris County Sheriff Ed Gonzalez, who described the incident as “something out of a movie.”

The woman was described as being in her mid-30s with two young children, ages 1 and 3. Both children were home at the time. The couple had other children who were in school at the time of the killing.

As the agents were leaving, the husband arrived at the home and shot his wife, who was holding one of the children, Gonzalez said. He then picked up one of the kids and ran outside and exchanged fire with the agents, authorities said.

TRIAL TO START FOR SAILOR ACCUSED OF IGNITING NAVY WARSHIP

The scene where a Navy recruiter killed his wife and fired upon Naval Criminal Investigative Service agents. He was later killed by authorities, officials said.
(Fox 26)

One NCIS agent was injured in the shooting and was taken to a hospital. An NCIS spokesperson confirmed to Fox News Digital that the agent was in stable condition as of Thursday night.

“Our thoughts and prayers go out to the victim’s family and loved ones,” NCIS spokesperson Jeff Houston said. “We also pray for a speedy recovery for our wounded Special Agent.”

The unidentified suspect fled the location and authorities later learned he may have headed to a family member’s home. When deputies found him, he got out of a vehicle and shots were fired, Gonzalez said.

The unidentified suspect was killed. Both children were found bloodied but uninjured, Gonzalez said.

“We are aware of the shooting incident in Harris County, TX, involving one of our personnel, and we are fully cooperating with NCIS and law enforcement as they continue their investigation,” the Navy said in a statement. “Our hearts go out to the family of the victim, the injured NCIS agent, and to those affected by the tragedy.”

The NCIS is the civilian federal law enforcement agency responsible for investigating felony crimes and protecting secrets for the Navy and Marine Corps.

One thought on “Texas Navy recruiter kills wife, fires at NCIS agents before being killed by deputies, authorities say”