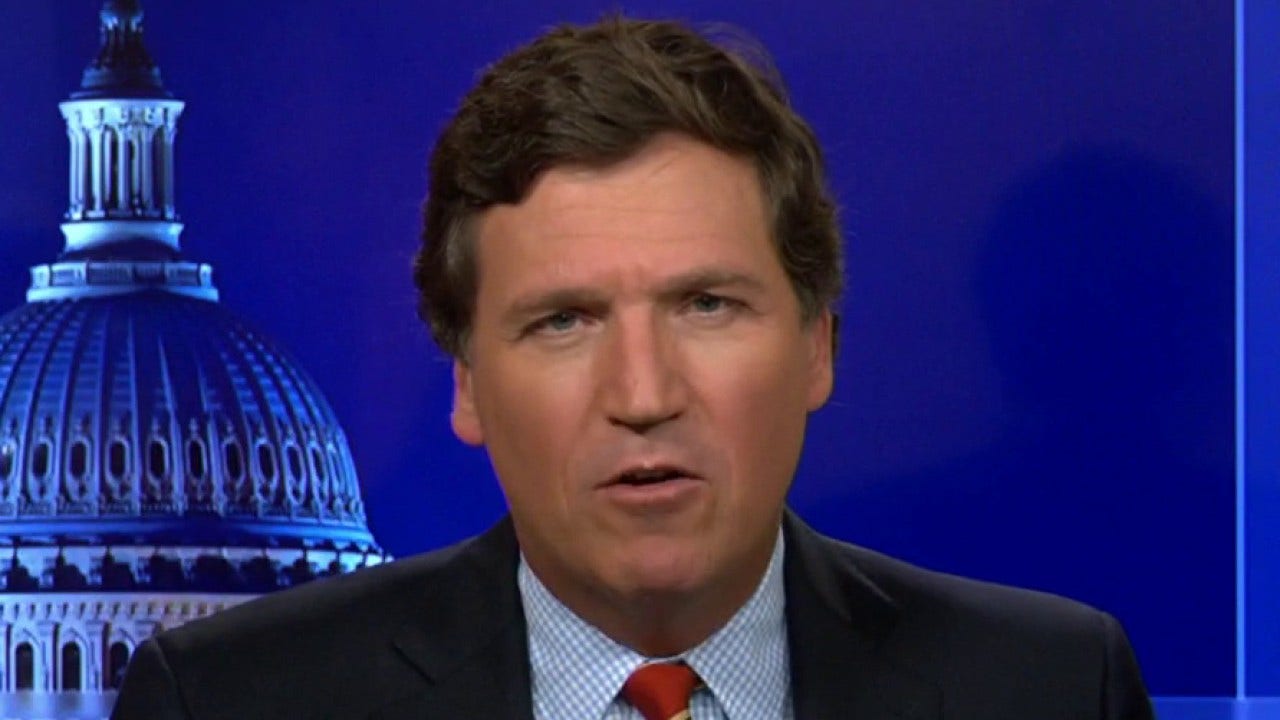 As we speak, Nord Stream 1 and Nord Stream 2 are pouring millions of cubic meters of natural gas into the Baltic Sea. Pictures from the air, which you can now see on your screen, show a toxic bubble field more than half a mile wide. You can only guess at how many marine mammals are being killed right now – countless. But the lasting damage may be to the atmosphere.

Natural gas is comprised of up to 90% methane. Methane, as Joe Biden has often told you, is the key driver of global warming, which is, of course, an existential threat to humanity and the planet. So, if you’re worried about climate change, what just happened to the Nord Stream pipelines is as close to the apocalypse as we have ever come. So, the question is, how did this happen? And it turns out it was not an accident.

At the very same time that leaks in these pipelines were detected, Swedish officials recorded two powerful undersea explosions, each one of which was equivalent to hundreds of pounds of TNT. Nothing in nature can account for that. Almost immediately, the pipelines began leaking in three separate places. So, there’s only one explanation for what happened. This was an act of industrial terrorism. That was very obvious to the prime minister of Poland and he wasted no time in saying so.

We can clearly see, he said, this was an act of sabotage, an act of terrorism. Well, yes, we can see that. So, the question is, who did it? And of course, the prime suspect is obvious. It would be the same man who caused domestic inflation here in the U.S. and stole the 2016 election from Hillary Clinton. That be Vladimir Putin. The Washington Post got right to it. “Putin,” they declared, “is now weaponizing the Nord Stream pipelines.”

According to the Canadian ambassador to the U.N., Vladimir Putin has decided to use “pollution as an act of war.” Progressive Twitter strongly endorsed this conclusion. Putin did it and that makes sense until you thought about it for just a moment. Vladimir Putin may be evil. They tell us that he is evil, but is he stupid? Probably isn’t stupid and yet and, here’s the strange part, if you were Vladimir Putin, you would have to be a suicidal moron to blow up your own energy pipeline. That’s the one thing you would never do.

Natural gas pipelines are the main source of your power and your wealth and most critically, your leverage over other countries. Europe needs your energy now more than ever with winter approaching. If you can’t deliver that energy, then countries like Germany have no need to pay attention to what you want. You’re in the middle of a war, an all hands-on deck war, so you need all the leverage you can get. Under these circumstances, there is no chance you would blow up Nord Stream 1 or 2.

Not now, obviously. In fact, it’s so obvious that even as our famously dim secretary of State, Tony Blinken, seemed to acknowledge it, sabotaging Nord Stream, he said today is “clearly in no one’s interest.” Right, but really only half right. It is true that blowing up Nord Stream does not help Vladimir Putin. He would not do that. Why would he? But that doesn’t mean that other countries wouldn’t consider doing it. They would consider it and we know they have considered it because at least one of them has said so in public. In early February, less than three weeks before the war in Ukraine began, Joe Biden suggested on camera that he might take out these pipelines. Watch.

PRESIDENT BIDEN: If Russia invades that means tanks or troops crossing the border of Ukraine again. Then there will be, there will be no longer a Nord Stream 2. We will bring an end to it.

REPORTER: But how will you. How will you do that, exactly, since the project and control of the project is within Germany’s control?

BIDEN: We will. I promise you, we’ll be able to do it.

U.S. President Joe Biden delivers remarks on what he calls the “continued battle for the Soul of the Nation” in front of Independence Hall at Independence National Historical Park, Philadelphia, U.S., September 1, 2022.
(REUTERS/Jonathan Ernst TPX IMAGES OF THE DAY/File Photo)

Notice how he phrased it and he’s the president. He doesn’t phrase things by accident, particularly his reading off cards. He didn’t say, I will pause the delivery of gas from Russia to Germany. He said there won’t be a Nord Stream 2. We’ll put an end to it. Will take it out. Will blow it up.

How will you do this? He was asked. I promise you we will be able to do it. They thought this through and yet those watching, very much including us, didn’t take Biden seriously when he said it.

This is the president who has declared climate change the most pressing emergency in the history of the world. This is the man who lectures you about using a woodstove or driving an SUV because of its emissions. This is the guy who spent billions trying to mitigate cow flatulence because methane. Would that guy really blow up a methane pipeline in the middle of the Baltic Sea? It was hard to imagine.

That would be an unimaginably reckless act. That would be the kind of thing you would do if you wanted to start a nuclear war. It would be insane and yet in retrospect, it’s obvious they were thinking about this because Joe Biden wasn’t the only person to suggest it. Toria Nuland at the State Department said pretty much the very same thing. Nuland is a lifelong war cheerleader. She worked to bring about the Iraq invasion, never apologized, kept going. She helped engineer the coup that overthrew the Ukrainian government some years back. So capable, clearly she’s capable of anything… but environmental terrorism? Even for Toria Nuland, that seemed too much too extreme, and yet here she is in January.

VICTORIA NULAND: With regard to Nord Stream 2, we continue to have very strong and clear conversations with our German allies and I want to be clear with you today. If Russia invades Ukraine, one way or another, Nord Stream 2 will not move forward.

One way or the other, we’ll stop Nord Stream. Now, looking back, those words seem chilling eight months later, as natural gas pours into the Baltic Sea and is in the atmosphere. So, you have to ask, could the Biden administration really do something like this? We can’t say for sure. We don’t know for sure. We can tell you that close allies of the Biden White House believe they certainly did do it. Radek Sikorski is a Polish politician who is chairman of the EU USA delegation in the European Parliament.

He’s connected. He’s also the husband of regime stenographer Anne Applebaum of The Atlantic magazine. Sikorski is so close to Joe Biden that he’s got a picture of the two of them together in his Twitter profile. So, when the pipelines blew up, Sikorski responded immediately and here’s what he wrote. “Thank you. USA.”

So once again, did the Biden administration really do this? It’s hard to believe. Given that it’s an atrocity, it’s effectively an act of terrorism, we don’t want to make that accusation, but we should tell you that maybe not coincidentally, today, a brand-new pipeline was unveiled, a pipeline that carries non-Russian natural gas in roughly the same areas, Nord Stream 1 and 2. This is called the Baltic Pipe. It was inaugurated in Poland. It will carry natural gas from Norway through Denmark to Poland and other countries nearby. And it’s likely to do very well, since now it has less competition.

Making sense? What does the White House say about this? How are they accounting for what happened today?

Well, they’re not exactly enthusiastically denying responsibility for it. Instead, they’re looking at the upside. Here’s the president’s publicist, noting that the destruction of yet another energy pipeline is yet another opportunity for you to buy an electric car.

KARINE JEAN-PIERRE: As you all know, these pipelines weren’t pumping gas into Europe at this time and NS2 was never operational, as you guys know. NS1 has not been operational for weeks because Putin has weaponized energy and we have said this, many times before. This just drives home the importance of our efforts to work together to get alternative gas supplies to Europe and to support efforts to reduce gas consumption and accelerate true energy independence by moving to clean energy economy.

Oh. “Moving to clean energy” say that people who very may well be responsible for letting methane into the Baltic Sea and into the atmosphere at a scale that most people can’t imagine. The people lecturing you about your SUV may have blown up a natural gas pipeline and created one of the great catastrophes of our time in its effect on the environment.

If they did this, this will be one of the craziest, most destructive things any American administration has ever done. But it would also be totally consistent with what they do. What do they do? They destroy. These people built nothing, not one thing. Instead, they tear down and they desecrate from historic statues to the Constitution to energy infrastructure and no one in Congress is trying to stop any of it. They’re just preparing for the inevitable fallout. Tonight, the Senate just advanced a spending bill with $35 million for the Department of Energy to “prepare for and respond to potential nuclear and radiological incidents in Ukraine.” What?

The spending bill also brings the total U.S. expenditure on Ukraine, the war, but also funding its government and energy for Ukraine to $67 billion on the eve of what could be a massive economic disruption here to our economy, $67 billion. How much is that? Well, it’s more than Russia’s entire military budget last year, and Congress is expected to fully pass the bill later this week with Republicans nodding along like the zombies they are.

What would be the effect of this? Every action has a reaction, equal and opposite. Blow up the Nord Stream pipelines? Okay, we’ve entered a new phase, one in which the United States is directly at war with the largest nuclear power in the world. It doesn’t mean we’ll go nuclear immediately, but it does suggest there could be consequences. If we actually blow up the Nord Stream pipelines, why wouldn’t Russia sever undersea internet cables?

What would happen if they did that? What would happen if banks in London couldn’t communicate with banks in New York? Just that one piece of it, leaving aside its potential effects on our power grid, but let’s just say the banks couldn’t communicate with each other for one day. What would the economic effect of that be? We would cascade downward into your house. We can have an actual collapse. We could wind up very quickly in third world conditions. Those are the stakes. Have the people behind this, the geniuses like Toria Nuland, considered the effects? Maybe they have. Maybe that was the point.

Tucker Carlson currently serves as the host of FOX News Channel’s (FNC) Tucker Carlson Tonight (weekdays 8PM/ET). He joined the network in 2009 as a contributor.

One thought on “TUCKER CARLSON: What really happened to the Nord Stream pipeline?”