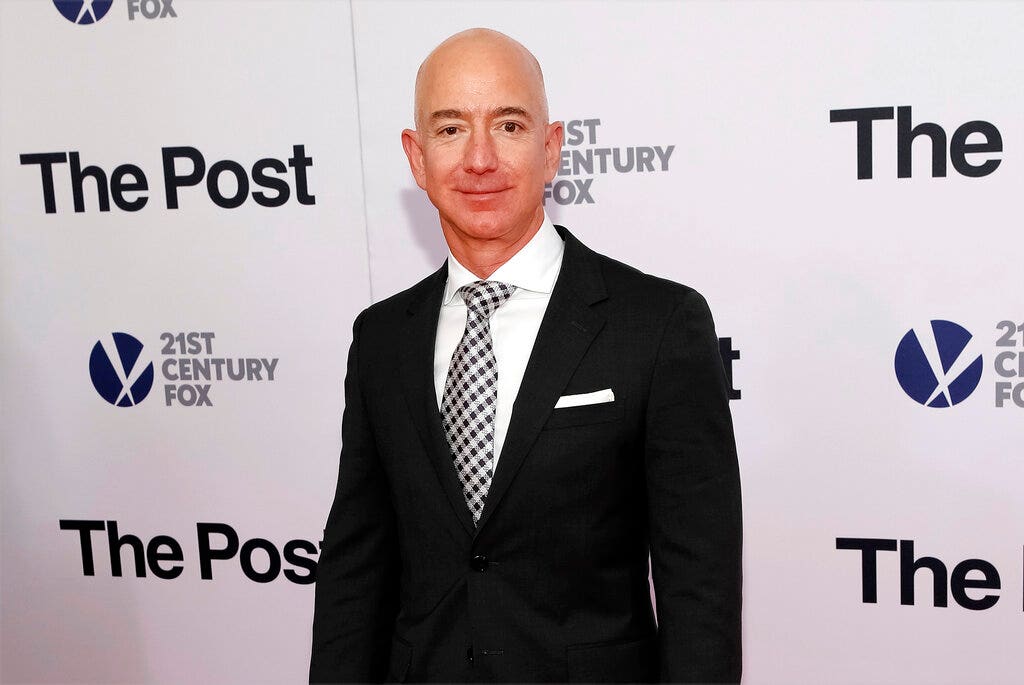 FILE – In this Dec. 14, 2017, file photo, Jeff Bezos attends the premiere of “The Post” at The Newseum in Washington. Private investigators working for Bezos have determined the brother of the Amazon CEO’s mistress leaked the couple’s intimate text messages to the National Enquirer. That’s according to a person familiar with the matter who spoke Monday to The Associated Press. (Photo by Brent N. Clarke/Invision/AP)

Amazon CEO and Washington Post owner Jeff Bezos caused quite a stir on Twitter Friday when he publicly mocked President Joe Biden for his latest solution for inflation.

The world’s second richest man, behind Elon Musk, responded to the president’s tweet saying that making the wealthiest businesses in the world “pay their fair share” would solve the inflation crisis currently gripping America.

On Friday, Biden tweeted, “You want to bring down inflation? Let’s make sure the wealthiest corporations pay their fair share.”

Bezos cracked Biden’s tweet, beginning with a dig against the administration’s new propaganda department, “The newly created Disinformation Board should review this tweet, or maybe they need to form a new Non Sequitur Board instead.

“Raising corp taxes is fine to discuss. Taming inflation is critical to discuss. Mushing them together is just misdirection,” he added, completely trouncing the president’s idea.

Many Twitter users expressed shock that Bezos, the man who owns one of the most prominent left-leaning newspapers in the world, would call out Biden in such strong terms.

Some simply agreed with his statement, others expressed frustration that the owner of The Post, a paper that has been accused of protecting Democrats – especially Biden – is only now speaking out against Democrat Party policy.

“I don’t like agreeing with you,” replied ACT for America founder Brigitte Gabriel.

“Jeff is just p-ssed that the government Disinformation Board is taking work from the newspaper he owns. That’s the Post’s job,” tweeted conservative commentator David Reaboi, mocking Bezos’ paper as the government’s propaganda outlet.

Mike Hahn urges Bezos to get The Washington Post to fact-check Biden if he doesn’t like his statements.

Tennessee congressional candidate Robby Starbuck replied to Bezos’ tweet, writing, “Maybe that newspaper you own could stop being a propaganda paper for the ruling Democrat regime and hold them accountable for their lies?”

WHITE HOUSE BURIED OVER TWEET CLAIMING THERE WAS ‘NO VACCINE’ WHEN BIDEN TOOK OFFICE: ‘DELETE THIS’

Others hit Bezos from the left.

The Young Turks managing editor Jonathan Larsen tweeted, “Oh look the billionaire is telling us what is ‘fine’ to discuss.”

The Intercept DC bureau chief Ryan Grim tweeted that Bezos was in the wrong, claiming, “Raising taxes to reduce demand and lower inflation is an econ 101 level concept. We have the dumbest oligarchs.” In fact, according to economic theory, raising taxes on individuals would reduce demand while raising taxes on companies would drive prices up even further.