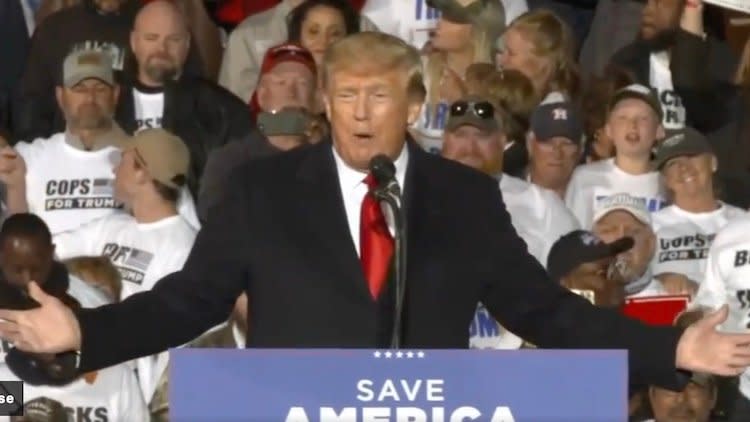 “We have to keep our country gay,” Donald Trump stammered at a campaign rally in North Carolina on Friday.

Clearly reading from a teleprompter, Trump misread the canned words sent his way.

“Remember I was going to say, I was going to use an expression,” he said. “We have to keep our country gay, puh, puh, but it’s not, I mean, for some reason, it’s not great anymore.”

Trump was at the rally in Wilmington, N.C., to support Republican Senate candidate Ted Budd, a congressman who’s stated the pro-LGBTQ+ Equality Act, currently awaiting a vote in the Senate, was “the triumph of cancel culture over facts, reason, and empirical knowledge.”

The cheering audience didn’t seem to be affected by the fact that Trump, his company, and his children were sued this week by the New York attorney general, who accuses the Trump Organization of massive fraud. Trump also faces a possible indictment for allegedly stealing top-secret classified documents and lying to the FBI about having them. He also is being investigated by the Justice Department for possibly instigating the January 6, 2021 insurrection at the Capitol, and faces another possible indictment in Georgia for trying to overturn his loss there in 2020. Among other legal threats, Trump also faces lawsuits from people involved with the Capitol riot and from writer E. Jean Carroll, who accuses him of rape.