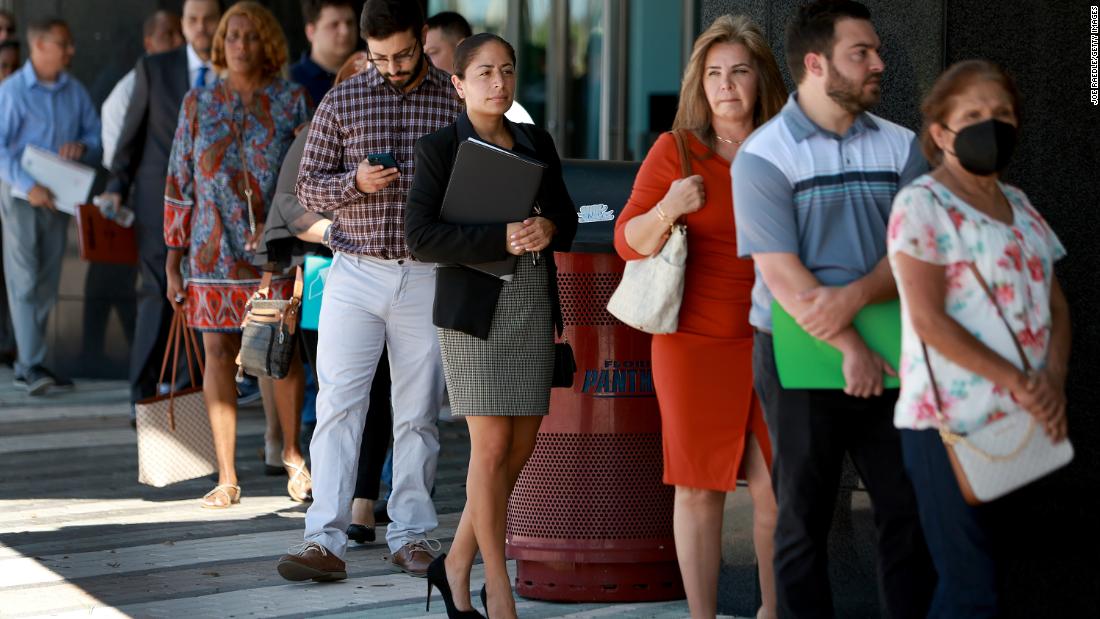 News
admin
July 7, 2022July 7, 2022
For more on the storm clouds, see this report from Nicole Goodkind at CNN Business about how normally it is a lack of demand from consumers that can lead to a recession.

Covid-19 has flipped that on its head. Now it’s the supply chain issues, caused by the pandemic and the war in Ukraine, driving inflation. Sagging demand could follow as government spending — expiring child tax credits, for instance — drops off.

At the same time, the Federal Reserve’s answer to inflation — spiking interest rates — is bound to hurt demand too. Mortgage rates are almost double what they were this time last year and there’s going to be less money flowing into the economy.

Then there’s the stock market, which for years and even during the pandemic seemed untethered from reality, but which is now feeling very bumpy and helping cut Americans’ confidence in the economy.

Then there’s the jobs market, which has not gotten the memo about storm clouds and a possible recession. Data from a government report released Wednesday showed US employers were still desperate to hire people in May — there were 11.3 million job openings, according to the Bureau of Labor Statistics. Plus, about 4.3 million Americans quit or changed jobs in May, suggesting workers feel comfortable moving around, and layoffs were extremely low.
CNN’s Anneken Tappe noted last month that American businesses, for now, are ignoring the warnings of recession to continue hiring. She wrote:

The common definition of a recession necessitates two straight quarters of declining GDP, which seems an uncomfortably close possibility for America.

But some economists are quick to point out that one common feature of recessions is missing in the mix: The labor market is still going strong.

What’s with these mixed messages and what should we make of all of this? I talked to Elise Gould, a senior economist at the Economic Policy Institute and a co-author of The State of Working America, for her take on all of this.

Here are some of the key points she made:

Is this a turning point in the jobs market?

Job openings and employment reports, she said, “seem to suggest that we still have a pretty strong economy, but one that may be showing some signs of cooling off.”

Wage growth, she argued, may be “moderating or decelerating.”

“I think that that’s the trend to be looking at — is there a bit of a turning point here,” she said.

The workers who continue to quit jobs in such high numbers aren’t necessarily retiring or leaving the labor force, Gould said. “Many of the people who were quitting were actually quitting and just finding other jobs mostly in the same sector. So you might quit one restaurant job and take another one. They aren’t leaving the labor force altogether.”

When I asked Gould, who specializes in wages and labor, how the Fed’s plan to raise rates will affect workers, she said it could hurt. There will be less spending in the economy, which could lead to higher unemployment.

“You basically are causing some pain and suffering in the name of trying to fight inflation, and that’s a really tricky calculus,” Gould said, especially since the current inflation is coming not from the labor market, but from outside forces, like Covid-19 supply chain snarls and Russia’s invasion of Ukraine.

Gould said to keep an eye on wage growth to gauge the strength of the job market. Looking at this May compared to last May, she said, suggests strength. But more recently, things have slowed.

“You can see the deceleration much clearer if you look at from one month to the next or from one quarter to the prior quarter,” Gould said.

When I asked Gould to rate the economy, she was hesitant. While there are aspects of the pandemic recovery that look strong, it’s not clear what comes next.

“What’s the adjective that goes along with that,” she wondered. “Is it temporary? Is this going to be long lasting? Are we going to now see a turnaround?”

She worried that too extreme action by the Federal Reserve to tame inflation could halt the progress workers are making.

While Gould is looking for a potential turning point in the jobs market, there are also some indications strong numbers could be hiding some problems in the labor market.

Beth Ann Bovino, the chief economist for S&P Global Ratings, wrote for CNN Business Perspectives in June that women have not returned to the workforce the same way men have following the pandemic. She also noted that wages have grown, but not as fast as inflation, which means paychecks have actually shrunk.
For more on wages vs. inflation, CNN’s Tami Luhby and Tal Yellin have a comparison.

If the Fed’s plan to raise interest rates causes unemployment to rise and hiring to slow, Bovino argued, “the ‘cure’ for the US economy and jobs market may feel worse than the disease.”