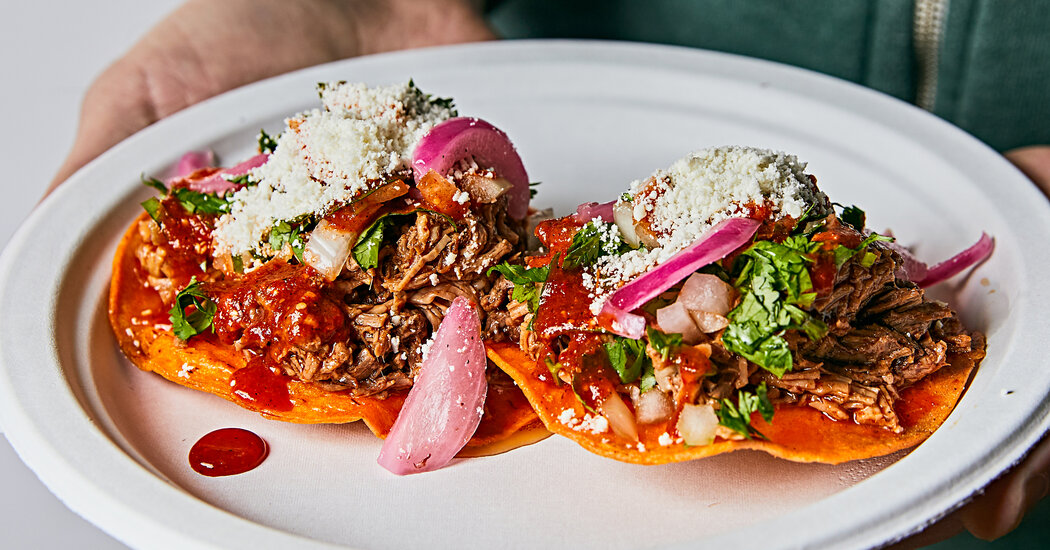 I strongly believe that baseball is the kind of sport that you don’t need to know much about in order to enjoy it. Long before the Atlanta Braves were the 2021 World Series champions, my Georgia-born friends and I would shell out $10 to watch them play the Mets at Citi Field in Queens. (Most of that time was spent just chatting and occasionally watching the action.)

Mets games are a relatively affordable form of New York City entertainment, but that affordability doesn’t always extend to the food sold at Citi Field. As much as I love to consume beer and chicken tenders in great quantities, some of the best and most enriching eating is just one stop away on the No. 7 train’s express line at the Junction Boulevard stop.

Underneath those well-worn subway tracks is a world of copious, no-reservation-needed eating that you’ll miss unless you disembark and walk down to Roosevelt Avenue. A veritable market — mostly featuring foods of the Latin diaspora — is teeming with options.

For about $12 — bring cash! — you can have four of the best tamales of your life from Evelia’s Tamales at the northwest corner of Junction Boulevard and Roosevelt Avenue. You can order the bright salsa verde tamale, with rich shredded chicken tucked into the cooked masa, or the heartier adobo with spicy guajillo peppers and pork, among others. Or do what I did and ask for dealer’s choice. It’s impossible to go wrong.

At another cart, I tried some of the crispiest and airiest cheese empanadas I may ever encounter. They came hot out of the frying oil perfectly crunchy with a sliver of salty, melted white cheese inside. I only bought one and I instantly regretted it. I could have eaten a thousand. My regrets to chicken tenders.

When I returned this past weekend, the woman who sold those empanadas was nowhere to be found, but that’s the nature of Junction Boulevard: It’s always changing. So instead, I grabbed a piping hot chicharrón quesadilla from Homemade Taqueria at the corner of 40th Road and Junction, where you can watch the staff make tortillas in real time.

Farther down Roosevelt Avenue at the corner of 78th Street, you’ll find Birria-Landia, which will hopefully never disappear. There, they serve the kind of birria de res you’ll find in Tijuana, Mexico. Back in 2019, the food truck heralded an obsession, now shared by TikTok users and the street-food scene alike, with consomé-soaked birria tacos.

“The meat, a blend of brisket, shank and top round, is rich and seems to grow softer as you eat it, like a square of chocolate,” wrote Pete Wells in his two-star review of the truck, which now has a second location near the Lorimer stop on the L line.

These businesses are part of a rich network of ambulantes, or street vendors, some of whom started selling food only after the pandemic began to offset losing work or housing. In late 2020, my colleagues Juan Arredondo and David Gonzalez published a moving interactive article about these vendors, many of whom are undocumented. They all must contend with the city’s limited number of available permits, and unlicensed vendors can face crippling fines. Please take time to read their stories — they share these experiences with thousands of others.

That stretch of Roosevelt Avenue is just as much a part of the fabric of New York City as going to see the Mets play. There’s no reason we can’t enjoy and honor each. After all, it’s only a train stop away.