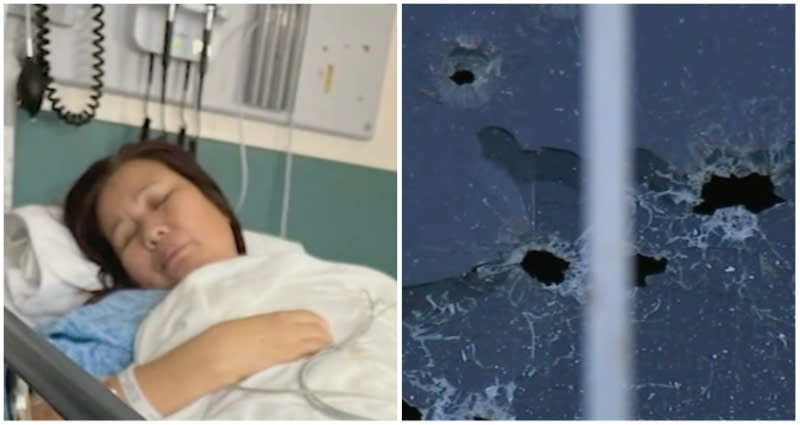 A woman was hit several times by stray bullets while she was asleep in her Oakland, California, home last month.

The woman in her 60s was sleeping alongside her husband in their Little Saigon residence at the 1100 block of 10th Avenue when was shot three times shortly before 5 a.m. on Aug. 17, reported ABC7.

Officers responded to the scene and recovered multiple shell casings. The victim was taken to a local hospital, where she is now listed in stable condition.

The victim is reportedly an immigrant who fled to the U.S. from the war in Vietnam in search of a better life. She settled in Little Saigon with her husband and gave birth to five children.

The victim has also been robbed and physically assaulted in the past, according to her daughter Roxana.

“She’s gone through all of that, but this is the scariest moment of her life, because she almost died,” Roxana told ABC 7 News. “She still has all the bullet fragments inside her. It’s embedded deep inside. We can’t do anything about it. She’s in so much pain. We just want her to get better.”

“They don’t know this is our lives we’re talking about. It’s more than hell; it’s a living nightmare,” she added. “I can’t sleep at night. It’s an emotional rollercoaster every single day. I’m scared for my mom’s safety, I‘m scared for her health and I’m scared she’s going to leave this world.”

More from NextShark: 34,000 visitors trapped at Shanghai Disneyland for hours after a woman tested positive for COVID-19

No suspect information has been released regarding this case. There is still an ongoing investigation by the Oakland police.

Roxana has called for change to gun laws and says she hopes the Oakland police will provide their family with an update soon.

“It’s yet another tragedy and another indication that we need to get guns off the street. We need to do everything possible to reduce the level of gun violence,” Oakland City Council President Nikki Fortunato Bas told KTVU.

A GoFundMe page has been set up by the victim’s family to help cover her medical expenses.

“Everything is still unknown on her health status, our mother has three holes in her body, multiple bullet fragments still inside her body,” Roxana wrote on the fundraising page. “The last three weeks have been difficult, as she has been in and out of the ER multiple times. She is in constant pain and in need of help just to get up or move. Her wounds are severe, with inflammation and hematoma. We are still waiting to hear back whether the doctors would be able to remove any fragments, or whether her injuries are still too severe for any surgery.”

One thought on “Woman struck by stray bullets while sleeping in Oakland home; daughter calls for increased gun control”